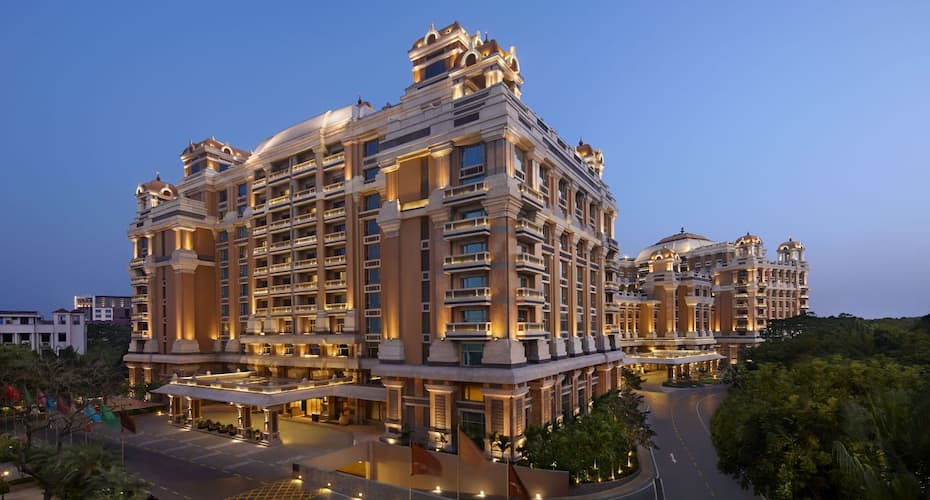 It also has a bar, handcrafted chocolate shop and a gourmet shop. It also has ballroom named Rajendra and boardroom named Tanjore for conventions, conferences, exhibitions, symposiums and banqueting.Few of the places to visit nearby are Guindy National Park (2 km), Marina Beach (10 km) and Valluvar Kottam (7 km).

This Chennai accommodation is reachable via Chennai International Airport (10 km) and Kotturpuram Railway Station (5 km). Note- The taxes mentioned in your reservation confirmation are indicative,since starting July 1, 2017, the Goods Service Tax (GST) shall beimplemented in India.

Please be advised that changes or additions to thecurrent taxes, if any, shall be charged accordingly. Note: Please be informed that AADHAAR card will be avoided as a photo ID document for check-in formalities as it is considered a sensitive document with personal data linked to it. Due to Covid 19, certain hotel facilities and services may be limited as per Govt. regulations. A copy of the medical certificate permitting you to travel and stay at the hotel is mandatory.

You would be required to sign a mandatory self-declaration with an undertaking section as part of the check -informality at the hotel. Travel history, both domestic or international, will have to be disclosed in the undertaking documents at the hotel.

Travel history, both domestic or international, will have to be disclosed in the undertaking documents at the hotel.

Inspired by the mighty Chola dynasty and its profound impact on the southern aesthetics, the five-star flagship of the ITC Hotels in South India, ITC Grand Chola Chennai is a tribute to the legacy of the Chola empire. The grandeur of the hotel spells sheer luxury and elegance with three wings, the largest banquet in the country, theatre, plush residences and suites, fine dining, signature spa and bespoke experiences. The palatial hotel has 600 rooms in total out of which there are 16 luxe suites, 506 vast rooms and 78 lavish service apartments. The rooms are categorised into the Executive Club, Suites, Towers and Eva Rooms which are designed specifically for women and equipped with thoughtful amenities.

The third largest hotel in India sprawls across 16,00,000 sq ft and is designed on the South Indian temple architecture. The hotel redefines contemporary luxury staying true to the traditional elements of the royal heritage of the Cholas. It manifests the architectural philosophy and artistry of the erstwhile kingdom with motifs carved intricately on its walls and pillars. A perfect blend of opulence and modern functionalism, the hotel caters to the needs of the busy business guests to the tailor-made demands of the travel connoisseurs. One of the best names in Indian hospitality, the property stands in Guindy, a thriving business hub of Chennai with important spots in the city located close by. The hotel scores high on accessibility with Chennai Airport situated 9 km while the centre of the city is 13 km from the property. The green hotel also has an on-site organic waste converter and is doing its bit in preserving the environment.

• The hotel has five swimming pools, a 24X7 gymnasium, the signature spa called Kaya Kalp, and a salon called Salon Di Wills.
• The business guests can avail the facilities of eight meeting rooms, eight banquet halls for symposiums, meetings and weddings. The 5,50,000 sq ft pillar-less ballroom, Rajendra can accommodate up to 5,000 people.
• The hotel arranges for airport transfers and has concierge services to cater to every need of the guests.

ITC Grand Chola is among the best gastronomic addresses in Chennai offering its guests an array of culinary delights set in an impressive ambience. It houses 10 dining destinations, two bars, a patisserie and boulangerie.

Madras Pavilion: This is a multi-cuisine buffet place open for the three meals along with a live station.
Pan Asian: The name says it all. Relish the flavours of Southeast Asia in a chic ambience. It costs Rs 4,200 for two.
Peshawari: Head to the signature restaurant for the Northwest Frontier cuisine. A meal for two ranges between Rs 4,000-Rs 5,000.
Royal Vega: A haven for vegetarians, sample some of the finest delicacies from the kitchens of the former royal houses of India. A meal for two: Rs 5,200.
Ottimo Cucina Italiana: Offering the scrumptious Italian fare in a spiffy setup, the restaurant features a live counter. A meal for two costs Rs 5,000.
Avartana: A wide range of traditional fare from the Southern part of the country, this one costs Rs 4,500 for two.
The Cheroot: Malt & Cigar Lounge: Come here to lounge with friends or to talk shop over cigars and the best of malts.
Tranquebar: A luxurious bar serving the finest collection of spirits from across the world.
Cafe Mercara Express: The 24X7 coffee shop serves assortment of delectable nibbles along with the best brews.
Nutmeg: Buy the finest chocolates, confections, deli meats, and artisanal breads as a souvenir from the gourmet shop.

The ITC Grand Chola rate card offers suites and rooms falling in the higher price point. You can choose from the different offers and avail the member-only privileges on the rooms you reserve at the hotel. Here is the rack card for ITC Grand Chola.

• Executive Club starts at Rs 8,000 meant for the business travellers, Eva rooms cost Rs 10,000 onwards and are especially designed for the female patrons.
• The Towers are priced at Rs 12,000 curated for the jetsetters.
• Chola Suites start at Rs 25,000 and offer the best of the ITC Grand Chola. Apart from these choose from the Chola Residences for a longer stay priced at Rs 15,000 onwards.
• The Grand Presidential Suite called the Raja Chola Suite starts from Rs 3,00,000 whereas the Presidential Suite, Karikalan is at Rs 2,00,000 exclusive of taxes.

ITC Grand Chola is situated 13 km from Chennai city centre. You can reach the hotel in approximately 40 minutes. The hotel is located on the Mount Road in Guindy, a prominent industrial hub in Chennai. The property is centrally located and is accessible to the main spots in the city. The ITC Grand Chola address is 63, Anna Salai, Guindy Institutional Area, Little Mount, Guindy, Chennai, Tamil Nadu 600032.

Chennai International Airport is the nearest airport which is located at a distance of 9 km. It takes roughly 22 minutes to reach the hotel from the airport. Chennai Airport is the fourth busiest airport in India as well as the headquarters for the Airports Authority of India (AAI) in South India. It is well-connected to the rest of the country and you can book a flight from Delhi to Chennai , Mumbai to Chennai or any other centre in the country pretty easily.

Guindy Railway Station is the nearest railway station. It belongs to the railway network of the Chennai Suburb. You can book a train to Chennai and disembark at the Chennai Central Railway Station to reach ITC Grand Chola. It is 16 km from the hotel and can be reached through a drive of 40 minutes. The railway station is the busiest in South India and gets trains from all over the country with over 200 trains running from, arriving and passing by the station. Some of the trains which arrive at the Chennai Central are Chandigarh Madurai SF Express (22688) , Hyderabad-Chennai SF Express (12604) , Charminar Express (12670) to name a few.

Guindy Bus Station is the nearest bus stand and it is a mere 3 km run from the hotel. You can get a number of city buses to travel from Chennai to Guindy.

Places to visit in Chennai

A bustling metropolis, steeped in cultural roots and tradition, Chennai bursts into a song touching the high notes of its southern heritage. Resting on the south east of the Indian Peninsula the city boasts of temples, beaches and delectable cuisine. Formerly known as Madras, it is a major centre for the Southern academics, power, and politics. From the hub of the Dravidian dynasties which bestowed the city with many architectural gems, to a Portuguese colony later, Chennai remains a top tourist destination. Some of the must-visits in Chennai are:

Fort St George : Built in 1644 it was the first fortress built in the country by the British.

Connemara Library: One of the largest libraries in Asia, this houses some 6 lakh books and was constructed in the 19th century.

Thousand Lights Mosque: One of the largest mosques in the country, the multi-domed mosque is a revered place for the Shia community.

Dakshina Chitra: A storehouse of the history of South India and exhibits the culture and true lifestyle of the people of the land.

Crocodile Bank: Situated 45 km from Chennai, you should visit the place to see the crocodiles in their true form.

Marina Beach: Head to the longest beach in the country in the evening to unwind after spending the day exploring the tourist attractions.