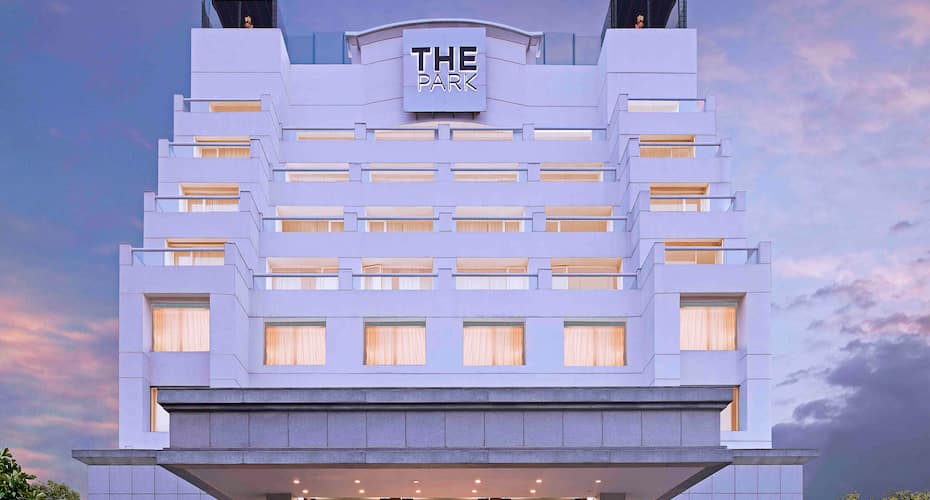 About The Park Chennai

This luxurious property in Chennai offers various International cuisine to Indian cuisine at its 24-hour restaurant, Six-O-One. There are three richly furnished banquet halls known as Sansara Hall, Chandra Room and Surya Room, which can host meetings, conferences, weddings and other important ceremonies.

The Park hotel is located within 0.2 km from the US Consulate and Semmozhi Poonga Botanical Garden.A total of 214 elegantly designed rooms and suites is spread over 9 floors designed with plush interiors. In-room amenities includes workspace wired with 2-line telephone facility, coconut shell inlay tables, cordless phone and The Jewel Box in the room is packed with small eats and beverages.

It also has glass walled bathroom with glass washbasin, rain shower and massage shower. The hotel serves Thai cuisine at the Lotus Restaurant. Pasha is one of the best nightclubs in Chennai. Overlooking the city, the spa offers treatments with regional specialties besides contemporary treatments.

It also houses a state of the art gymnasium for daily exercise, yoga and meditation rooms together with steam, sauna chambers and whirlpools.Chennai International Airport is 16 km and Chennai Egmore Railway Station is at 6 km from the property.

Reviews for The Park Chennai

Amenities at The Park Chennai

Located in T-Nagar, the most famous locality of Chennai, The Park Chennai is one of the best hotels in Chennai. It is a 5-star property and offers all the luxury experiences you can expect. The chic interiors of the hotel are influenced by the former premises of Gemini Film Studios, an old Indian film studio in Chennai. One of the best things about The Park, Chennai is its 24-hour in-house restaurant Six-O-One which panders to the midnight cravings of its guests. Chennai's top tourist attractions like Thousand Lights Mosque, Marina Beach, Pondy Bazar, Spencer Mall, Kapaleeswarar Temple etc. can be easily reached from the hotel, which is centrally located. Its convenient location is another reason that makes it among the most popular 5-star hotels in Chennai.

The Park Chennai features 214 tasteful and well-appointed rooms. There are seven categories of rooms at the hotel which are classified as Deluxe Queen Room, Luxury Queen Room, Studio Rooms, Deluxe Suite, Premier Suite, Luxury Twin Room and Deluxe Twin Room. All the rooms have a contemporary decor and offer all amenities to provide a luxurious stay to its guests.

How to reach The Park Chennai

Nearest Airport to The Park Chennai


The nearest railway station to The Park Chennai is Chennai Central Railway Station which is 4.2 km away. Almost all the Indian cities and towns are well connected to Chennai Central Railway Station. Trains operate from Delhi, Mumbai, Pondicherry, Kolkata and Bangalore, among other cities. Some of the popular trains are Chennai Rajdhani 12434, Chennai Express 12163, Pondicherry New Delhi Express 22403, Coromandel Express 12841 and Shatabdi Express 12028.


The nearest Interstate Bus Stand to The Park Chennai is Chennai Mofussil Bus Terminus. It is located 7.5 km away from the hotel. The top bus operators catering to Chennai are Kallada Travels, Parveen Travels, Sea Bird Travels and SRM Transport. Some of the key cities that buses regularly ply from are Pondicherry, Hyderabad, Goa, Madurai, Vizag among others. From the bus stand, you can take a rickshaw or an auto to reach the hotel.

Places to Visit in Chennai

Located on the East Coast Road of Chennai, Golden Beach is one of the most favourite places to visit in Chennai. The cleanliness and safety of the Beach makes it the key attraction of the city. Swimming at the Golden Beach is allowed for adults as well as children, but it is suggested to be cautious. Many south Indian movies have also been shot here, and if you get lucky, you might get to see a film shoot too. The Beach is also part of the famous VGP Universal Kingdom, a theme park in Chennai. If you get an opportunity to visit the Golden Beach, do not miss the chance to visit the VGP Universal Kingdom and enjoy the thrilling rides.

Though all the South Indian beaches are known to be clean, Edward Elliot’s Beach is known to be the cleanest South Indian Beach. It is also famous as Besant Nagar Beach or Bessie. The Beach was named after the erstwhile Chennai Governor, Edward Elliot. It is the end point of the Marina Beach shore and is perfect for spending some quiet time. Edward Elliot's Beach has restaurants, monuments and a shrine nearby, which adds to its appeal.

Dedicated to Lord Shiva, Kapaleeswarar Temple is a beautiful South Indian Temple built in Dravidian style architecture. The temple has two entrances called gopurams, and a sacred tank. These massive and colourful gopurams stand out. The east gopuram is taller than the west gopuram. The west gopuram faces the holy tank. Beautiful shrines of Shiva and Parvati (Kapaleeswarar and Karpagambal) are kept at the temple. Every year during March - April, a spring festival is held at the temple which is visited by devotees all over the world.

FAQs About The Park Chennai Chennai