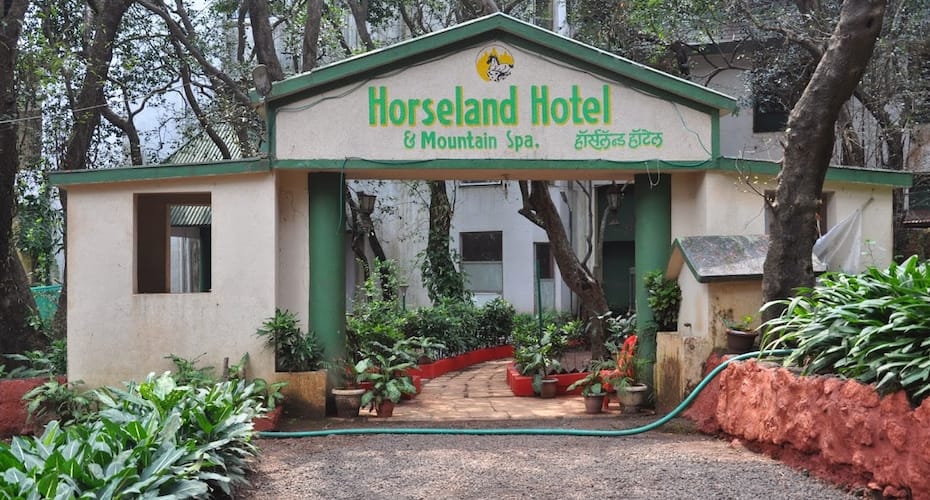 About Horseland Hotel And Mountain Spa

<b>Providing you the best of comforts in a charming ambience<br><br>The Horseland Hotel and Mountain Spa is the most spacious, oldest and most chosen hotel in Matheran. The hotel is surrounded by lush greenery and spectacular wildlife and is 2km from Charlotte Lake.

The outdoor pool has waterfall feature and the hotel offers activities like horseback riding. <br><br>The Khandala View Point is just 300 metres from the hotel. The Matheran Waterfall and the Pankaj Waterfall are 3 and 4km away. <br><br>The Neral Railway Station is just 8km from the hotel and the Sahar International Airport in Mumbai is about 88km away.<br>Mumbai and Pune are close by from here, about 80 and 124km from the hotel.<br><br>The hotel comes with a swimming pool and waterfall bath, kids pool, indoor and outdoor games, adventure activities, an ayurvedic massage centre, beauty and wellness spa and daily entertainment activities.

Free parking and internet are also available. <br><br>The in-house restaurant offers indoor al-a-carte menu and a garden style buffet spread. The in-house deli is perfect to laze around and enjoy snacks and beverages.

The restaurant s specially Parsi food is a must try.<br><br><b>What people love the most about this property is its welcoming ambience and great location<br><br>Book now and enjoy the warm hospitality of Horseland Hotel and Mountain Spa</b>

Stone’s throw from Charlotte Lake, Horseland Hotel & Mountain Spa is among the many hotels in Matheran that fill up the space in the quaint hill station. The property makes for an apt stay for its set in the scenic lush surroundings. A vacation here offers the sylvan charms of the naturescape of Matheran clubbed with the bucolic design and location of the resort. The rooms fall into different price brackets thus catering to the pockets across the board and feature the amenities accordingly. All rooms are spacious and guests have the option to choose from tents, Deluxe rooms both ac and non-ac, Superior rooms, interconnected and basic rooms. The spa room allows you to repose on the massage table and de-stress post the travel of the day to awaken a new you for travels for the next day. Saunter down the winding walkways taking in the spectacular views of the verdancy abound. Have a ball with kids under the waterfall bath in the swimming pool. Savour the scrumptious lunch in the garden-themed restaurant or head to the activity and recreational zone and indulge in the several indoor games. Partake in the various activities arranged and offered by the resort such as vegetable decoration and carving classes, karaoke, or the magic show which would delight the kids. The venturous souls can opt for the outdoor acts such as zorbing and more. The resort also arranges for pick up and drop for the guests from any location in Mumbai and from the airport or the railway station for guests coming from elsewhere.

• You can find a jacuzzi, swimming pool with a waterfall bath, and a kid’s pool.
• Dining and a buffet set up at the garden restaurant. There is also an in-house deli.
• Indoor games like pool table, carom, table tennis and outdoor activities such as aqua zorbing and pool crossing are also available.
• Entertainment facilities such as karaoke, discotheque, movies, campfire, vegetable carving and decoration classes, magic and juggler show are also available on board.
• Pick up and drop facility for guests living in Mumbai and Pune. Other guests can be picked up from the Pune or Mumbai airport/railway station.
• The in-room facilities include television, telephone, hot and cold water, coffee maker, refrigerator and more depending on the room chosen.

Standard non-ac room is priced at Rs 3,500 and standard ac room can be booked at Rs 4,000. An air conditioned Deluxe Cottage is priced at Rs 5,000 and Superior room can be grabbed at Rs 6,000. The above rates include all three meals. The weekend pricing is a little steep than the above weekday rates.

The nearest airport to Horseland Hotel & Mountain Spa Matheran is the Chhatrapati Shivaji Airport which is around 45 km from the hotel. Mumbai Airport operates almost all the domestic carriers be it Air India, Air Asia, Vistara, GoAir, IndiGo to name a few. After exiting the airport hire a taxi to get to Matheran which is the easiest way to reach the hill town. Do note that the taxis or buses will drop you a few kilometres before the starting point to Matheran as the place is a no-vehicle zone.

Neral Railway Station is the closest railway station to Horseland Hotel & Mountain Spa Matheran and a toy train from Neral to Matheran takes a little over 2 hours to reach Matheran.

You can find a few buses from Kolhapur, Mumbai, Pune to Matheran run by both state-run and private players. But it’s better to take a cab than a bus to Matheran as the previous is more convenient and easier.

Places to visit in Matheran

Porcupine Point, also known as the Sunset Point is among the popular vantage points in Matheran. It is called porcupine for it resembles the rodent. From here one can see the Prabalgarh Fort and even the nearby viewpoints. Come here to capture the sun go down in the lens of your camera. Explore the Shivaji’s Ladder which is another attraction in Matheran. Shivaji’s Ladder is basically the pathway with steps which connects the One Tree Hill Point to the Matheran Valley. It is said that Shivaji used the same path for his hunting trips. Today it is among the famous trekking spots in Matheran. Alexander Point is another viewpoint with a beautiful path covered in red soil leading to the point. Visit to relax and take in the serene environs of the place. If you feel hungry there are some kiosks selling snacks and tea nearby. Pisharnath Mahadev Mandir dedicated to Shiva is the oldest temple in Matheran. Visit the temple if you are tired of the commercial and crowded places.