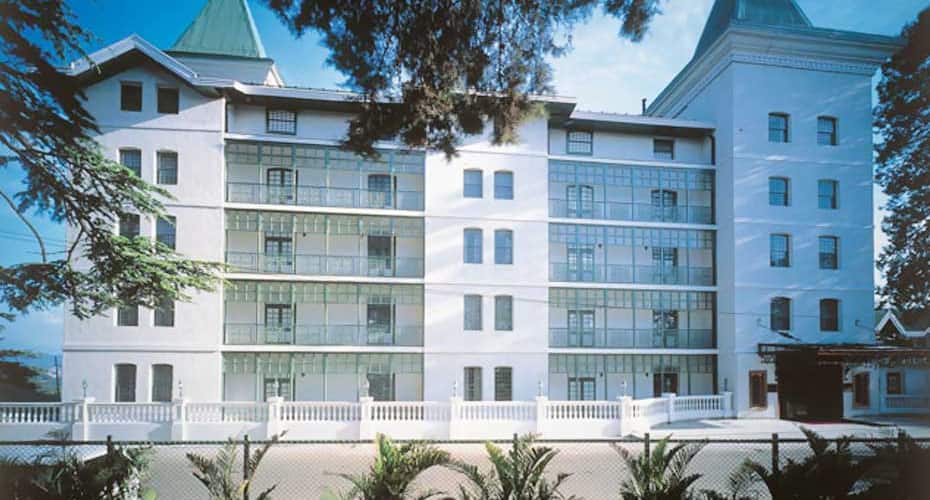 About The Oberoi Cecil

<b>Get pampered in luxury within the finest ambience in Shimla</b><br><br>Located in the capital of Himachal Pradesh, Shimla, The Oberoi Cecil is a 5-star property which offers 24-hour room service along with complimentary Wi-Fi.

Moreover, it provides medical assistance and currency exchange facility too. Internet access is also available in all areas free of cost. The hotel features a tour desk to assist the guests with their travel plans and also provides chargeable shuttle service for the convenience of the guests.

Each room has a flat-screen TV with satellite channels along with a DVD player. Every room is equipped with tea/coffee maker, desk, free newspaper and wardrobe. The rooms also feature an en-suite bathroom with shower and toiletries.

Laundry service and dry cleaning service are available but on additional charge. <br>The hotel features a restaurant which offers buffet and a la carte options along with American, Indian, Local and International cuisines.

Guests can enjoy a cup of tea or coffee with classic martini or light Indian or continental snacks at the Lounge and Bar of the hotel. <br>The hotel is just 1 km away from Rajasthan Parivahan Nigam Bus Stand, 3 km from Jaisalmer Railway Station and 15 km away from Jaisalmer Airport.

Some of the major attractions near the hotel include Himalayan Bird Park (800 metres), Annandale Golf Course (3 km), Circular Road (3 km) and Jakhoo Hill (8 km). Mall Road, which is a commercial hub of Shimla, is located at a distance of 3 km from the hotel. <br><b>Book now and enjoy world class services at The Oberoi Cecil. <br><br>What people love the most about this property is its great location and classy ambience.

Reviews for The Oberoi Cecil

Amenities at The Oberoi Cecil

Ensconced in the hills, the heritage hotel, Oberoi Cecil exudes its colonial glory and overlooks the cedar-covered Shimla Valley. Built in 1854, it used to be the most coveted addresses for the British aristocracy with grand ballroom dances and high teas. Restored and revamped by the Oberoi Group, it is one of the best luxury hotels in Shimla today. Located near the Viceregal Lodge also known as Rashtrapati Niwas on the Observatory Hills, the luxury heritage hotel stands distinct painted in white with green terrace. The inside of the hotel is touched with the rays of the sun with the skylight illuminating the foyer and the lounge with fireplace. The rooms come with wooden flooring bringing out the warmth and the colonial character and are equipped with high speed internet and other amenities. The restaurant serves a delish meal offering different cuisines with special attention given to the local delicacies of the hill state. There is a private dining room which can be booked for a meal for two. The spa at the hotel comes with amazing views of the valley shrouded by the clouds while you avail the signature Oberoi treatments from the spa catalogue. Guests with kids can put their feet up as the children’s activity zone will keep the little ones engaged with an array of games, books and toys. Book your stay in Oberoi Cecil for a memorable trip in the hills.

The Oberoi Cecil offers you an array of in-room facilities, the best in class dining and hospitality for a comfortable stay.

• The restaurant serves pan-Indian, Himachali delicacies and international cuisine. Relax at the bar and the lounge before or after your meal with a shot of coffee or a drink.
• The indoor temperature-controlled swimming pool is one of a kind in Shimla. Apart from that there is a fitness centre and a spa which offers treatments and massages along with Yoga.
• The children zone opens daily from 9 am to 9 pm with gaming consoles, books, toys and a weekly movie screening.
• The in-room facilities include butler service, walk-in wardrobe, shower, hairdryer, bathrobes and towels, round the clock in-room dining, personal bar, luggage space, LCD television, electronic safe, WiFi, telephone, and fax.

How to reach The Oberoi Cecil Shimla

Located at the end of the Mall Road, The Oberoi Cecil Shimla can be found near the Viceroy Lodge. The best way to reach Shimla by air is to take an hour-long flight from Delhi to Chandigarh and then complete the journey by road in a bus or a taxi. It will take approximately 3 hours to reach Shimla from Chandigarh by road. The Oberoi Cecil address is Chaura Maidan Road, Nabha, Shimla, Himachal Pradesh 17100.

Located in Jubbarhatti, the Shimla Airport is 20 km from the city centre and 17 km from the Oberoi Cecil. Currently you can find a flight from Delhi to Shimla operated by the Alliance Air, a subsidiary of Air India. Or use the Chandigarh Airport to reach the hotel. It will take approximately 3 hours to cover the distance of 123 km from Chandigarh Airport to the Oberoi Cecil Shimla.

Shimla Railway Station located in Nabha is within a stone’s throw of the hotel. All you need is a 2-minute walk from the station to reach the hotel. If you plan to book a train from Delhi to Shimla, you need to know that it will take you till Kalka which is a further 80 km run from Shimla. You can book a Shatabdi Express to reach Kalka from Delhi. Or book a train from Delhi to Ambala Cantt which will take 3 hours of time and another 3 hours by a bus or cab to reach Shimla.

Shimla ISBT is 1.5 km and 4 minutes from the Oberoi Cecil. There are around 35 buses that run between Delhi to Shimla. The Delhi to Shimla bus journey will take you around 10 hours, take an overnight bus to reach the hill station. You can book HRTC, Himachal Tourist and other bus operators to reach Shimla from Delhi. Board the bus to Shimla from Kashmiri Gate or Majnu ka Tila in Delhi.

Places to visit in Shimla

Shimla is among the most famous hill destinations for the northerners with its picturesque beauty replete with beautiful landscapes and sights. The erstwhile summer capital of the British, its colonial charm is evident in the various structures built in the Victorian architecture. There is no best time to visit Shimla as it is a round the year destination and you can enjoy a vacation here in any month. One of the experiences you should go for while in the city is the Shimla toy train running from Kalka to Shimla. If it is your first trip to the city then here are a few famous places to visit in Shimla:

Christ Church: The neo-Gothic styled church is the second oldest in the northern part of the country and is among the important colonial structures in the city.

The Ridge: Another important landmark, it is located in the heart of Shimla along the Mall Road and is a popular tourist attraction.

Chadwick Waterfall: Cascading from the height of 67 metres, the waterfall is nestled in the Glen forests and is 5 km from the city centre.

Kali Bari temple: The temple is dedicated to Goddess Kali also known as Shyamala. It is believed that Shimla was named after the Goddess Shyamala.

Lakkar Bazaar: Other than the Mall Road, this is the place you need to visit for buying souvenirs. The market sells everything from curios to woollens and houses some of the best eateries as well.

FAQs About The Oberoi Cecil Shimla