Silhouetted against the modern skies of Agra with air that still whispers the skirmishes of the past and every swish of the wind rings in a welter of bellicose noises from the many battles fought for its possession - Agra Fort is a grand legend in the Mughal narrative. A UNESCO World Heritage Site, Agra Fort is also known as Red Fort or Lal Qila of Agra because of the red sandstone. Built in 1565 by Akbar- the venerated Mughal emperor, the fort also goes by the name of Qila-e-Akbari for it was refurbished under his aegis with the signature markings evident - the Indo-Islamic Akbari architecture. It was his grandson Shah Jahan who pulled down the earlier structures and erected new ones made of white marble - the one he was fond of. The fort served as a residence for the Mughal royalty until 1638 after which the royal house moved to the Red Fort in the new Mughal pleasure capital, Shahjahanabad now known as Old Delhi famous for its grotty, nostalgia-stoking lanes.

Situated just 3 km from the Taj Mahal, the Agra Fort was built on the banks of Yamuna as a defence to keep the enemy forces at bay. The rampart is 20 metres high and its walls are 2.5 km wide. The fort is a walled city comprising several structures which were demolished by various rulers only to be replaced by new preferences. The fort consists of four gates and the two main gates are: the Delhi gate and the Lahore gate. The Delhi gate was exclusively meant for Akbar and his security. It is now under the control of the Indian Army. The Lahore gate is now known as the Amar Singh gate and is the only gate for entrance to the Agra Fort.

Agra Fort has had many invaders and seen the rule of many dynasties resulting in its constant transformations. Babur took the control of the fort after defeating Ibrahim Lodi in 1526. The fort was now home to the Mughal supremacy and an object of envy for the rest. Sher Shah Suri in 1540 defeated Humayun and the new owner of the fort made changes to it to suit his tastes. Fifteen years later in 1555, Humayun usurped the Sur rulers and reclaimed the fort only to lose it again a year later. But soon Akbar waged a war against the Surs and was able to take control of the fort once again. By this time the fort started to lose its sheen and in 1556 Akbar rebuilt the entire fort with red sandstone. After the death of Shah Jahan the fort was captured by the Maratha rulers who lost it to the British, and was later handed over to the Indian government post Independence.

The fort has two halls: Diwan-i-Am, where Shah Jahan used to address the public and Diwan-i-Khas - meant for discussion of foreign matters with the emissaries. Near to Diwan-i-Khas lies the Nagina Masjid - the chamber for the royal women. Diwan-i-Khas was once famous for the iconic peacock throne of Shah Jahan which was placed in the centre engraved with exquisite gems and stones and also had the enviable diamond, the Kohinoor. The fort also houses the throne of Jehangir called the Takhti-i-Jehangir. One of the most interesting structures at the fort is the Shish Mahal made of multiple mirrors ordered from Syria. The mirror palace reflects the light because of its design. To the east is the Mausamman Burj in Khas Mahal, the white-marbled tower where Shah Jahan was confined during the final eight years of his life until he breathed his last in 1666. It is from the balcony of this place where he would admire the views of the Taj Mahal. No Mughal structure is complete without a well-trimmed garden and same goes for the Agra Fort. Anguri Bagh is the garden here which was later restored and is maintained well even today.

It took eight years and 4,000 workers to complete the construction of the colossal fort.The red sandstone used to build the fort was brought in from the district of Dhaulpur in Rajasthan.It is said that the hollowed walls of the royal chambers were filled with water to keep the rooms cool in summer.Shah Jahan spent his last years in the fort under house arrest on the orders of his son, Aurangzeb. He whiled away his final years marvelling at the Taj from Muasamman Burj balcony reminiscing about his beloved, Mumtaz Mahal and his days of glory.It is believed that the fort has several hidden underground tunnels and secret passages.

Agra Fort timings are from sunrise to sunset on all days of the week. The opening hours are between 6 am to 6 pm. You should also see other nearby tourist places like Taj Mahal, Mehtab Bagh, Itmad-ud-Daulah, Akbar’s Tomb and more during the visiting hours of Agra Fort. The best time to visit Agra Fort is during October to March as this is the time when you can sightsee all the touristy gems that Agra is known for. Plan ahead, to visit other famous monuments in Agra.

Agra Fort is located on the banks of River Yamuna and is just 2.5 km from the global tourist magnet - Taj Mahal. The Agra Fort address is Agra Fort, Rakabganj, Agra, Uttar Pradesh 282003. There are no Agra Fort closed days as the fort remains open to the public throughout the week. Unlike the Taj, Agra Fort is open even on Fridays.

How to Reach Agra Fort

Agra Fort is well-connected by road from nearby cities like Delhi, Jaipur and Lucknow. Agra Fort distance from Delhi is approximately 230 km from the Yamuna Expressway – a six-laned highway you can use to reach Agra from Delhi in around 3 hours.

Agra Airport is an airbase for the Indian Air Force and also serves the public. Known as Agra Civil or Kheria, the airport is located 5 km from the city.

Idgah Bus Stand is only 4 km from the Agra Fort. It is the largest bus stand in Agra city. You can choose from deluxe, semi-deluxe and standard buses to various cities such as Delhi, Jaipur, Kanpur, and Lucknow among others.

The Agra Metro Rail is to be launched in 2020. It is going to be a Mass Rapid Transit (MRT) under the UP government which will connect the main hubs and city points in Agra.

You can book Agra Fort ticket in advance to avoid the queues at the venue. For Agra Fort online ticket booking visit Yatra.com to book your Agra Fort tickets online. Remember, once booked, the entry ticket is non-refundable and e-ticket cannot be cancelled and is non-transferable. Remember to carry your photo ID proof when visiting the monument.

Things to do in Agra

There are many activities in Agra that you can choose from while booking your trip to the city. Other than visiting the historical monuments, hunting for souvenirs and sampling the delicacies you can explore the city further by booking interesting activities like Balloon Safari, or going for a Mughal Heritage Walk, or simply biking around the city.

Designed and built in about 1565 A.D. by the great Mughal Emperor, Akbar, Agra Fort was initially a military establishment. Later on, some of the additions were made by Akbar’s successors. Around 4,000 builders worked daily for eight years to complete its construction in 1573. Notably, the coronation of Emperor Humayun took place inside the fort. There are several edifices and subterranean apartments inside the Agra Fort. According to the historians, the entire fort is interconnected through tunnels. Agra became a significant centre of Mughal Empire after the battle of Panipat in 1526. 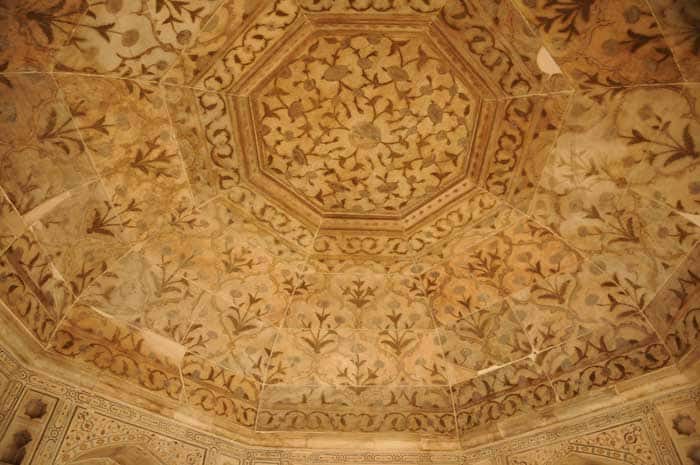 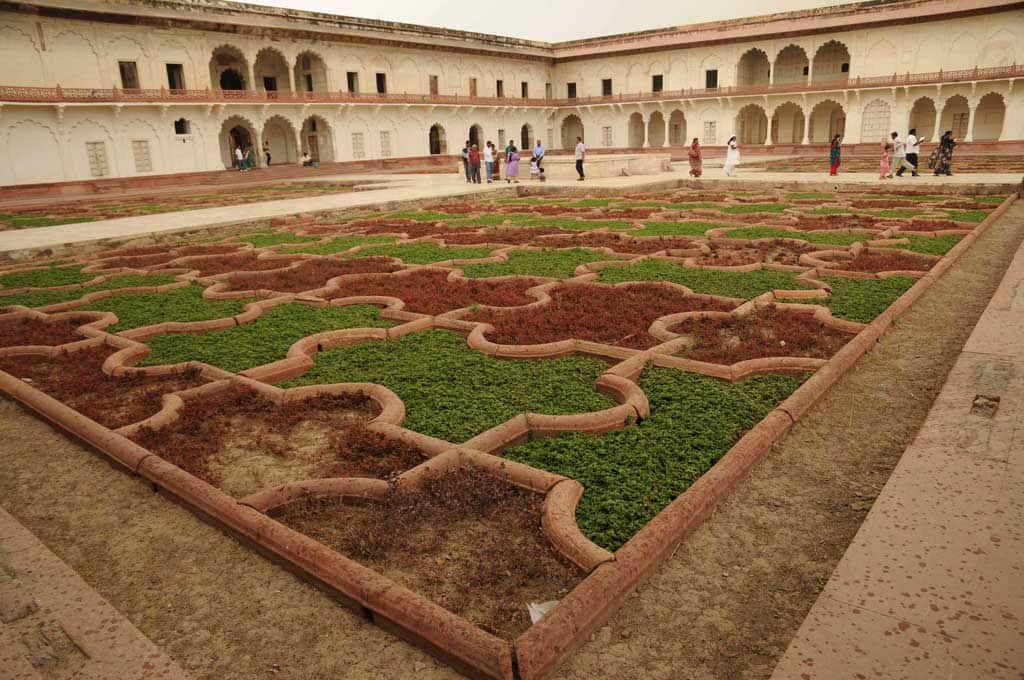 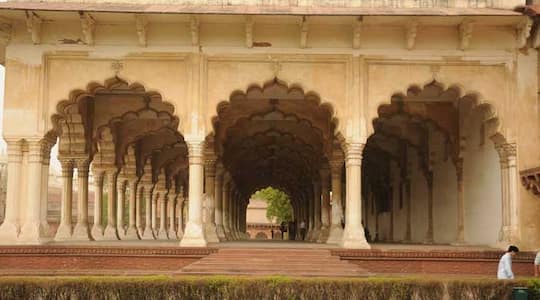 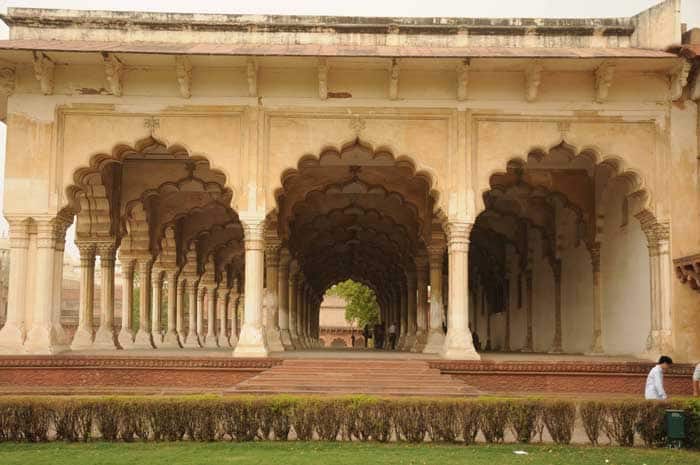 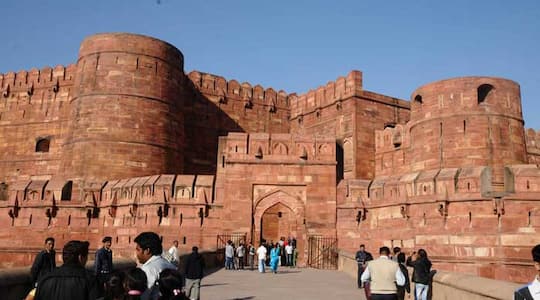