Situated to the north of the Taj Mahal complex and the Agra Fort on the opposite side of the Yamuna River, in the flood plains, Mehtab Bagh is also known as the ‘Moonlight Garden’. It is the last of 11 Mughal-built gardens along the Yamuna River. Centuries-old garden complex, Mehtab Bagh is a Charbagh complex. It is a classic style of Mughal garden that lies within a perfect square shape. Its restoration began in 1994, headed by the Archaeological Survey of India.

During the excavation of the 25-acre site, a huge octagonal tank furnished with 25 fountains, small central tank, and baradari on the east were found. This typical Mughal garden is planted in such a way that tall trees are followed by short trees, which are then followed by shrubs ending with plants. For young lovers, it is a perfect place to roam around. The dark green hue of ground cover, has beautiful birds and other small wildlife roam freely. Mehtab Bagh gives you a spectacular night view of the Taj Mahal.

# Mehtab Bagh opening timings are from 6 am to 6 pm. Other tourist places in Agra to visit are the Taj Mahal, Agra Fort, Akbar’s Tomb, Jama Masjid, Anguri Bagh, Chini ka Rauza, and Taj Museum. The timings for these monuments in Agra can be checked online at Yatra, or with the local guides or travel desk of your hotel.

# The Mehtab Bagh location is on the banks on River Yamuna, north of Taj Mahal with Agra Fort opposite it. The address for Mehtab bagh is near Taj Mahal, Dharmapuri, Forest Colony, Nagla Devjit, Agra, Uttar Pradesh 282001. A few hotels near Mehtab Bagh are ITC Mughal, Four Points by Shereton, Mansingh Palace, Howard Plaza and more.

# The ticket price for Mehtab Bagh for Indian, SAARC and BIMSTEC tourists is Rs 15. Foreign tourists have to shell out Rs 200 as entry fee. A few things to do in Agra are buying petha from Panchi Petha Store, shopping at Kinari Bazaar for souvenirs, taking a heritage walk and exploring the streets and food of Agra.

# Book tickets online for Mehtab Bagh from Yatra.com and also buy tickets for over 178 historical monuments in India on India’s leading online travel aggregator - Yatra. Visit the website today and browse through the museums and historical sites to check their ticket price and get other information.


* Shah Jahan used to admire the beauty of Taj Mahal from Mehtab Bagh. You can get a fantastic view of the Taj from here.

* It is said that Shah Jahan wanted the black Taj Mahal constructed at this square-shaped garden. 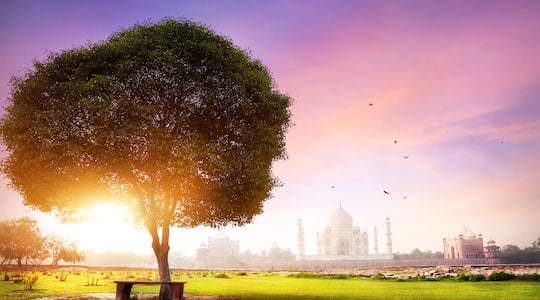