About Fifteen Temples at Lonar

The fifteen temples are named as 1. Papahareshwar Temple 2. Kumareshwar Temple 3. Yajaneshwar Temple, 4. Ramgaya Temple, 5. Mahadev Temple, 6. Bagicha Temple, 7. Wagh Temple, 8. Mor Temple 9. Kamalja Devi Temple, 10. Mahadev Temple near Kamaljadevi Temple, 11. Amberkhana Temple 12. Mungla Mahadev Temple 13. Deshmukh Temple, 14 Chopda Mahadev Temples, 15. Peer ki Chattri. These temples were built around the crater lake between the 11th - 12th century AD. These temples follow contemporary regional styles, quite homogeneously termed as Hemadpanti. The temples are dedicated mainly to Lord Ṥhiva, though there are few to other deities too. Kamalja Devi Temple is one amongst these, dedicated to Ṥhakti, where yearly annual fairs are organised during the festival of Navratra.

Lonar (19° 58' 37.22 N; 76° 31' 29.54 E), a tehsil in the Buldhana district of Maharashtra is a unique place, holding a combination of great geological and archaeological wealth. Known world-wide for a meteoritic crater and a saline soda lake, it is the world's only hypervelocity meteoritic crater on basalt rock formation that took place nearly 52,000 years ago during the Pleistocene Epoch. The crater locally known as Lonar Sarowar, finds mention in the ancient and medieval literature like the Skanda Purana, the Padma Puranand and the Ain-e- Akbari.

Along the periphery of the crater and the shore of the lake lie a number of ancient temples dedicated to the various deities of the Hindu pantheon like the Saiva, Vaishnav, and Shakti cult. These temples built mostly between the 12th to 14th century A.D. represent a continuous tradition of temple architecture, patronized by various dynasties like the later Chalukyas, Yadavas of Deogiri, Marathas, etc. These temples mostly show plain exteriors and are built by using blocks of basalt. Besides being mostly plain and less ornate from the interior as well exterior, these temples, since commissioned and built in different times, do not show many similarities. On plan, they mostly comprise the ardhamandapa, mandapa, antarāla and the garbha griha and a kunda- a tank for ablution. In contrast to the rather inornate temple, the door jambs or the dwarshakhas are highly elaborate. The śikharas of various temples are missing. Of the fifteen, some are more remarkable than the rest, eg. the Pāpahāreshwa Temple is known for its highly decorated Nandimanḍapa and puşkarinī; Yajñeshwar Temple is the most ornate one among all other temples. Garbhagriha door frame of Wāgh Mandir, Mahādev Mandir is highly elaborate, depicting various śākhās like vyāla śākhā, vallarīśākhā, stambha śākhā, nara śākhā, kumuda śākhā etc.

The crater and temples are considered equally religious, with most of the pilgrims undertaking parikramā of the entire crater. The Lonar group of temples in themselves illustrate a unique architectural, artistic, and aesthetic beauty. Following is a brief description of the fifteen temples, mostly in the crater lake shore:

Papahareshwar Temple at Lonar: The temple (8.32x6.75x4.00m) to Shiva and is locally known as Pāpahāreshwar Mandir. It is a group of many structures; including a small temple dedicated to Shiva, highly decorative Nandimanḍapa and Puşkarinī. The Nandimanḍapa is built on a high plinth led by a flight of steps with a lion balustrade on the western side. The manḍapa plinth has beautiful mouldings. The pillars are elaborately carved from top to bottom and depict miniature kīrtimukha, figures of Vishnu and Shiva in various forms.

Kumāreshwar Temple at Lonar: The temple dedicated to Shiva, is locally known as Kumareshwar Temple or Vedshala. The temple has an enclosure wall around it and an entrance gate on the north. The center of the manḍapa has a circular raised ceiling and is built in trabeate style. On the brackets are depicted figures of Shiva, Indra, Vāmana and Bhairava. Above these figures there are other depictions like Indrāni, Kaumārī, Varāhī and other goddess of the Saptamātrikā pantheon which are mutilated. The door frame of the sanctum is highly decorative and the center of the door frame beam (lalāţabimba) is decorated with a figure of Gaņesha.

Piranchi Chattri: The Chhatri (4.23x2.67x1.55 m) is a memorial structure, that probably belonged to a local king, and is known as Pirānchi Chattri. The temple is partially buried under the earth due to the fallen debris and accumulated earth.

Chopda Mahadev Temple at Lonar: The temple dedicated to Shiva, is locally known as Chopdā Mahādev Mandir, facing East. It has entrances on the north, south, and east. There are no sculptural representations on the exterior of the temple.

Ramgaya Temple at Lonar: Ramgaya Temple (16.99x13.31x6m) faces west. Originally the temple was dedicated to Vishnu and the image of Rāma seems to be a later addition. The temple has an interesting architectural feature, thekakshāsana - not a very regular feature in this temple group. Vasugi which is perhaps that of a mason's name, the sikhara of the temple is missing.

Mahadev Temple near Ramgaya Temple at Lonar: Mahadev temple (18.26x9.85x3.96m) faces west. The door frame of the garbhagriha is elaborately carved. On the western side of the temple there is a puşkarinī (9.80x9.80m) that has openings on the western sides.

Bagicha Temple at Lonar: The temple (16.12x7.44x4.61) is dedicated to Vishnu, and is locally known as Bagicha Temple. The exterior wall of the garbhagriha is completely plain and has offsets. The ceilings are built in trabeate style with a lotus medallion at the center.

Wagh Temple at Lonar: The temple dedicated to Shiva, is locally known as Wagh Mandir (16.71x12.54x6.71m) because tigers used to frequent this temple in the past. The door frame has a moulded base which depicts the kirtimukhas, lozenges, and architectural motifs. The ceiling of the mandapa and antrala is built in trabeate fashion and the central slab is decorated with lotus medallions.

Mor Mandir at Lonar: The temple is located in a wooded area and has many peacocks frequenting it, and hence is known as Mor (Peacock) temple (15.24x8.16x4.21m). A slight increase in the water level makes it inaccessible during rainy seasons. The temple faces east and has entrances on east and north, while the south wall has a window opening.

Amberkhana Temple at Lonar: The temple is known locally as Ambarkhana and is built on a raised plinth, facing east.

Deshmukh Temple at Lonar: The temple (6.30x6.14x3.36m) is dedicated to Shiva, locally known as Deshmukh Mahadev Mandir. The temple faces north. The extant ceilings are built in trabeate fashion, with the central slabs depicting lotus medallions. 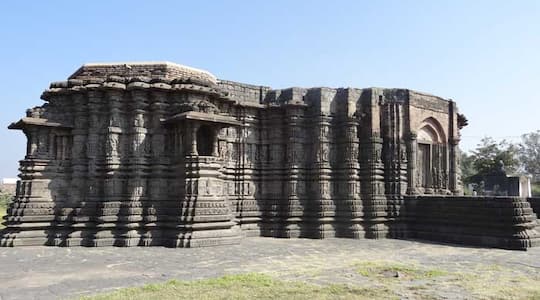 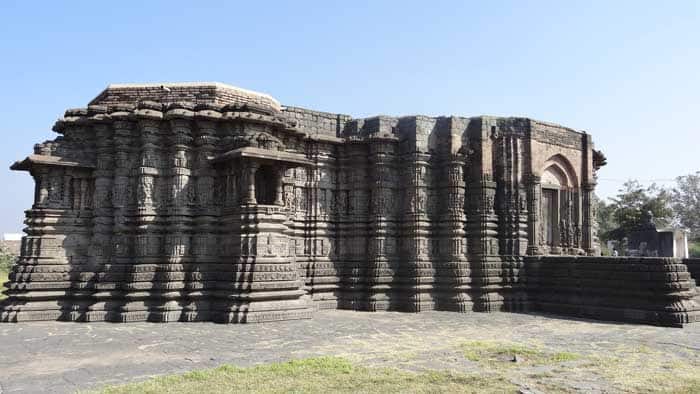 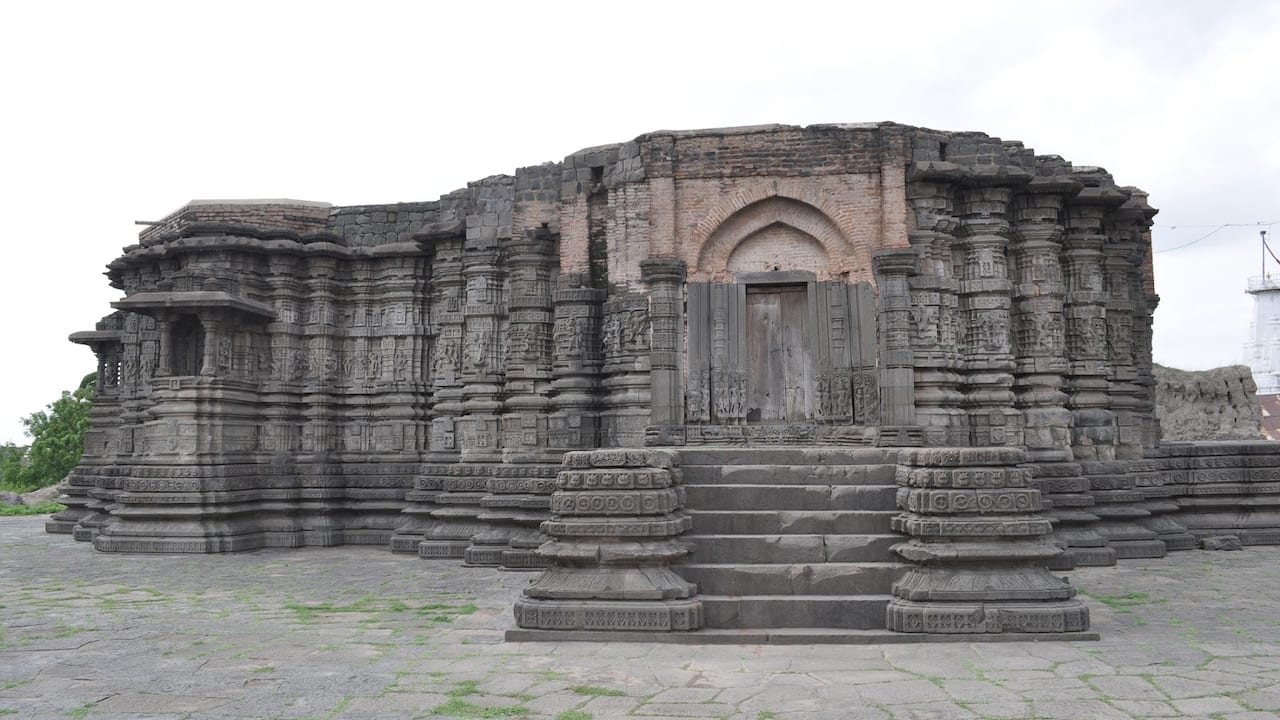 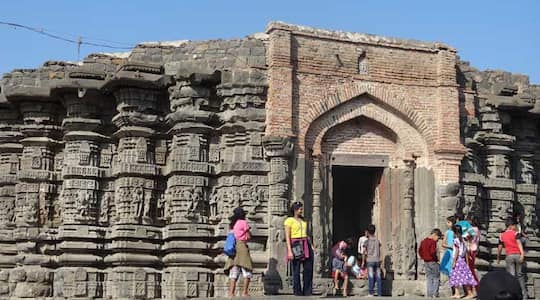 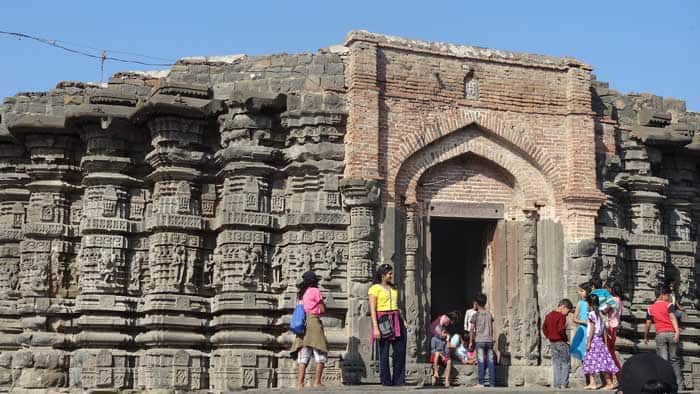 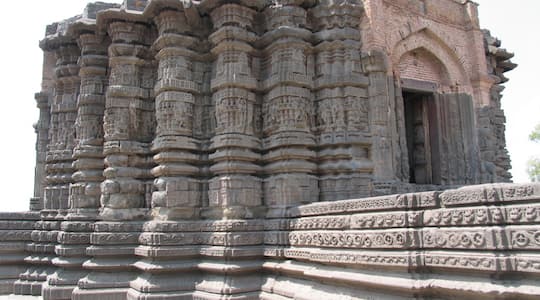 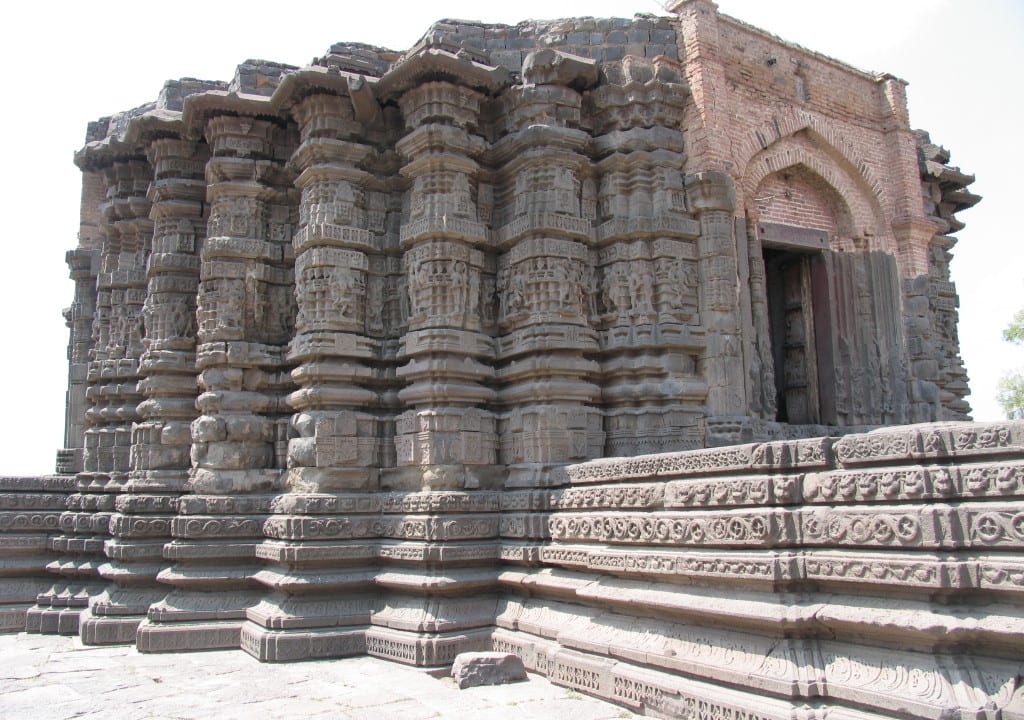