In a far-flung river valley, about 105 kilometre northeast of Aurangabad in Maharashtra, the ancient cave temples of Ajanta are carved into the steep rock face of a horseshoe-shaped gorge along the Waghur river. Much older than the Ellora Caves, the chain of 30 rock-cut Buddhist cave monuments that form the Ajanta Cave network came up between 2nd century BC to the 6th century AD. Brilliant in their detailing, the Ajanta Caves are among the greatest surviving examples of ancient Indian cave art.

A UNESCO World Heritage Site today, the caves fell to disuse soon after the Ellora, about 103 kilometre from Ajanta, rose to prominence, home to Hindu, Jain and Buddhist rock-cut caves. The desolation of Ajanta for nearly a millennium with the Deccan forest coming into their own and choking the sculptures, further expedited its downfall. It wasn’t until 1819 when an officer from British India, Captain John Smith, stumbled upon it by accident on a tiger-hunting party that the excellence of Buddhist religious art, and that of Indian rock-cut architecture came to the fore. The construction of the caves, also the earliest monastic institutions in the country, came up in two phases; the first one around 2nd century BCE and the second around 400-650 CE. Today the site is protected under the Archaeological Survey of India (ASI).

Of the 30 caves hewn into a 250-foot rock face, five constitute the Chaityas (a Buddhist prayer hall with a stupa on one end), while the remaining are Viharas (Buddhist monastery). You can explore majority of the caves with a particularly keen eye for caves 1, 2, 16 and 17 for being the finest surviving example of ancient Indian wall-painting. Alternatively in vivid and warm colours, the murals in these caves portray Buddha’s past lives and rebirths along with rock-cut sculptures of Buddhist deities and illustrations from Jatakamala by Aryasura.

If exploring the chain of caves that comprise Ajanta is on your mind, and you are wondering from where to begin, we suggest the caves that stand out for their historical and artistic excellence.

Cave 1: Lying on the eastern side of horseshoe-shaped bluff, this will invariably the first cave you will encounter while exploring the panorama of caves. The sprawling open courtyard on the facade of the cave is the reason for its steeper slope than the other caves. This was done in order to accommodate the grand facade, by cutting deep into the rock face. The artwork and the paintings in the cave, historians believe, was commissioned by Vakataka Emperor, Harishena, for the emphasis on royalty is conspicuous. Also, the Jataka tales depicted here talk about the previous births of Buddha where he was a royal. The cave in particular is breathtaking for its carved facade adorned with relief sculptures, and almost all surface is an embellished one with ornate carvings. The porch, the front court with little cells preceded by pillared antechambers, typical of the caves here in Ajanta, and the frieze over the cave with elaborate depictions of horses, bulls, elephants, lions, meditating monks and apsaras, characterise Cave 1. Apart from the architecture and detailing, it is truly the wealth of paintings adorning large portions of this cave, that leaves a visitor spellbound. Aside from scenes from Jataka tales, you have here two larger-than-life figures of the two Bodhisattvas Vajrapani and Padmapani on each side of the entrance to the Buddhist shrine.

Cave 2: Adjacent to Cave 1 is another cave whose walls, pillars and ceilings are thick with paintings. The murals portray an apparent bias for the feminine form aside from some 5th century frescoes that depict children studying in school, some listening to the teacher and the others enacting something. The carving of this cave happened between 475 and 477 CE, believed to me commissioned by a woman aide of Emperor Harishena. Unlike Cave 1’s focus on kingship, the paintings and rock carvings in Cave 2 are about powerful women playing a prominent role in the society. This cave is remarkable for its strong pillars and the carvings and paintings in all kinds of decorative themes such as human, animal, vegetation and divine motifs, with plenty of carvings dedicated to the Buddhist goddess of fertility, Hariti.

Cave 16: Ensconced smack in the middle of the site with a fleet of stairs leading into the single-storey structure is Cave 16 with two elephant figures placed on either side of the entrance. This cave was commissioned by Emperor Harishena’s minister, Varahadeva and dedicated to the community of monks. Scholars term this the ‘crucial cave’ in terms of influencing the architecture of the entire cave network of Ajanta, and for being a paradigm in understanding the chronology of the second and final phase of the construction of the cave complex. Cave 16 is a Vihara with the customary setup of a main doorway, two aisle doorways and two windows to let in some sunlight and brighten the dark interiors. The wealth of paintings in this cave will hold you in a thrall. Aside from depictions from various Jataka tales there are frescoes recounting mythological events like the miracle of Sravasti, conversion of Nanda - the half brother of Buddha, including the popular Jataka fresco of the Bodhisattva elephant that sacrificed itself to serve as food for starving people. Head to the left of the entrance and follow a clockwise pattern to follow the entire narrative. Explore scenes from the life of Buddha like the one where Sujata is offering food to Buddha robed in white carrying a begging bowl.

Cave 17: Like Cave 16, this one too has two stone elephants placed on either side of the entrance. Commissioned by Vakataka prime minister, Varahadeva and with donation from local king Upendragupta, Cave 17 is home to the greatest, and perhaps the most sophisticated, Viraha architecture. The cave also boasts of an assortment of paintings that are well-preserved, and over the years have become synonymous with Ajanta Caves. The broader theme of the frescoes here is bringing out the human virtues as mentioned in the Jataka tales with a growing attention to detail. It comprises a colonnaded porch, an array of pillars each with a unique design, a shrine in an antechamber in the heart of the cave, larger windows to let in more light, and extensive carvings of gods and goddesses from Indian mythology. With 30 important murals in Cave 17 alone including portrayal of Buddha in various postures alongside dabbling in themes as diverse as shipwrecks, lovers in throes of passion, a princess wearing makeup and a couple drinking wine together - a thread picked up from the goings-on of the early 1st millennium society, this cave is historically paramount.

The caves are shut for the general public on Mondays.

How to Reach the Ajanta Caves

You need to arrive into Aurangabad first to explore the Ajanta Caves. Aurangabad is about 333 kilometre from Mumbai. From Aurangabad city centre, the Ajanta Caves are about 102 kilometres away on the Aurangabad - Ajanta - Jalgaon road. Hiring a local taxi is the most preferred way of making a day trip to Ajanta. But if you are driving down, you should be apprised of the fact that the highway linking Aurangabad to Mumbai is connected to other major cities in the country such as Delhi, Jaipur, Udaipur, Bijapur, and Indore.

There is no metro rail availability in this area.

You can take a Maharashtra State Road Transport Corporation (MSRTC) bus that takes off from Aurangabad Central Bus Station to the north of Siddharth Garden and the Zoo, and drops you off at the Ajanta Caves entrance road. It is a 121 rupee fare from here to the caves. The cave entrance is lined with cafes, shacks, small restaurants and souvenir shops; there is a bus stand here from where you need to hop on the bus taking you to the caves site. The ride takes about 10 minutes and charges INR 16 for a non-ac bus.

Jalgaon city, about 60 kilometre from Ajanta Caves is the nearest rail head. Jalgaon Junction is well connected to important cities such as Mumbai, Agra, Bhopal, New Delhi, Gwalior, Jhansi, Goa, Varanasi, Allahabad, Bangalore, Pune among others. Trains like Punjab Mail 12138, Jhelum Express 11078, Goa Express 12780 depart from New Delhi railway station / Hazrat Nizamuddin railway station and arrive into Jalgaon Junction in approx. 17 to 18 hours. If you are coming from Mumbai, the Gitanjali Express 12859 or Mahanagari Express 11093 departing from Kalyan Junction and reaching Jalgaon Junction in approx. 5 hours is a good bet. Else you can arrive into Aurangabad via train and then go on to explore the caves. Aurangabad too is decently connected to all major cities in the country, beginning with Mumbai, New Delhi, Bhopal, Agra to Gwalior.

Aurangabad Airport, a domestic airport, about five and a half kilometre from the city centre is the closest airport to the Ajanta Caves. Air India, Jet Airways and TruJet are typically the airlines operating out of this airport. The airport has direct flights to two important cities, New Delhi and Mumbai, which further have great international connectivity. There are direct flights as well from other Indian cities like Jaipur and Udaipur.

The area near the caves have a mix of budget and boutique properties, else you can opt to stay at a hotel in Aurangabad.

It is always advisable to book your monument ticket online in order to avoid waiting in long queues at the site. You can book your Ajanta Caves online ticket from the Yatra website by going onto the Monuments section from the homepage, and then feeding Ajanta Caves in your search box. The subsequent page will show up all information about the caves including the Ajanta Caves ticket price. You can add the monument to your cart and proceed to make the payment. The ASI website is another online booking platform.

During your tour of Aurangabad, it’s a good idea to cross out other significant landmarks of the likes of Bibi ka Maqbara, Aurangabad Caves and Daulatabad Fort.

The Ajanta Caves in Maharashtra have found their way in the memoirs of a Mughal official of Akbar era in the early 17th century. Lost in the abounding lush green landscapes, they were accidentally discovered and were excavated in 1819 by a British colonial officer on a tiger-hunting party. They have been known to be first stated about in the chaityas and are the most ancient monuments. A major part of these caves were created in the 2nd century BC. With the downfall of the Vakataka empire in 480 AD, these caves were soon abandoned after the death of Harishena. The loyal patrons of these caves fled and Buddhist monasteries. 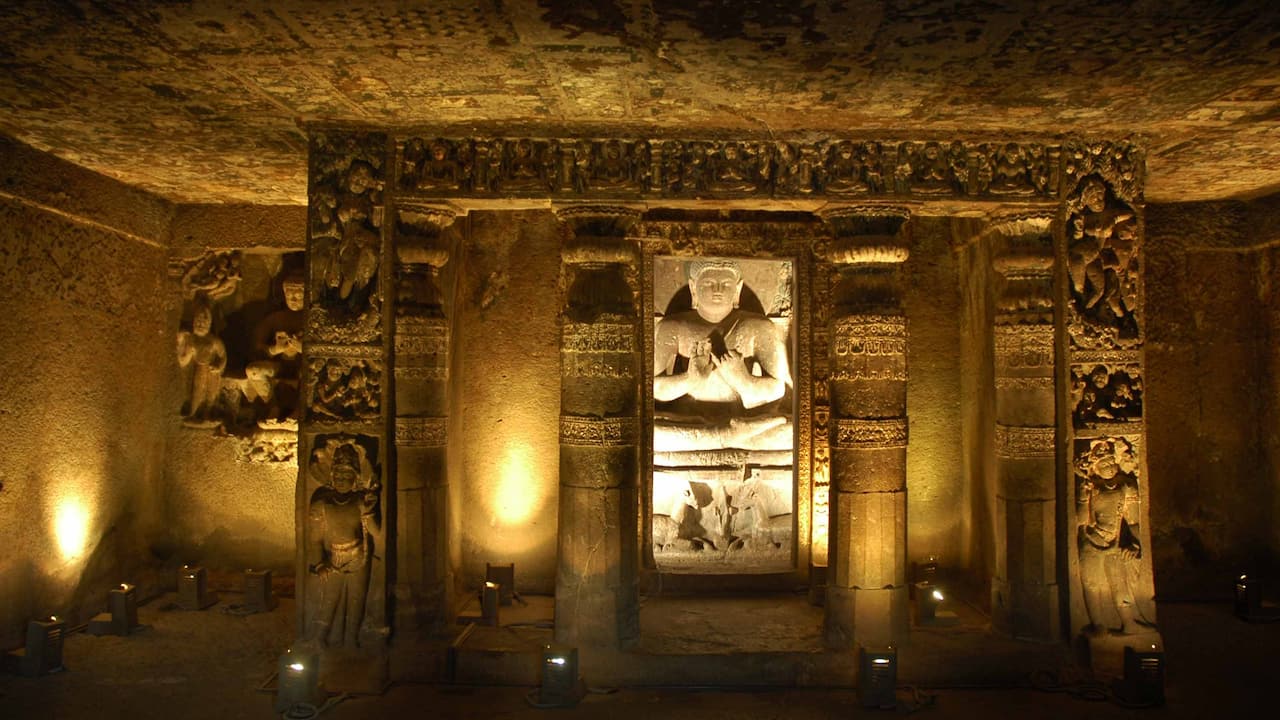 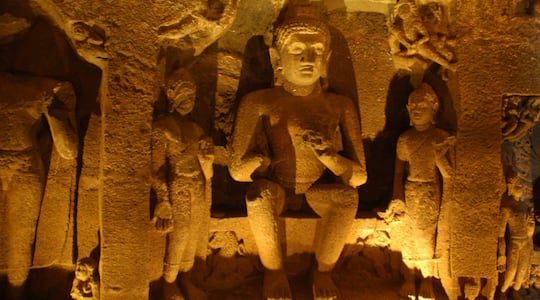 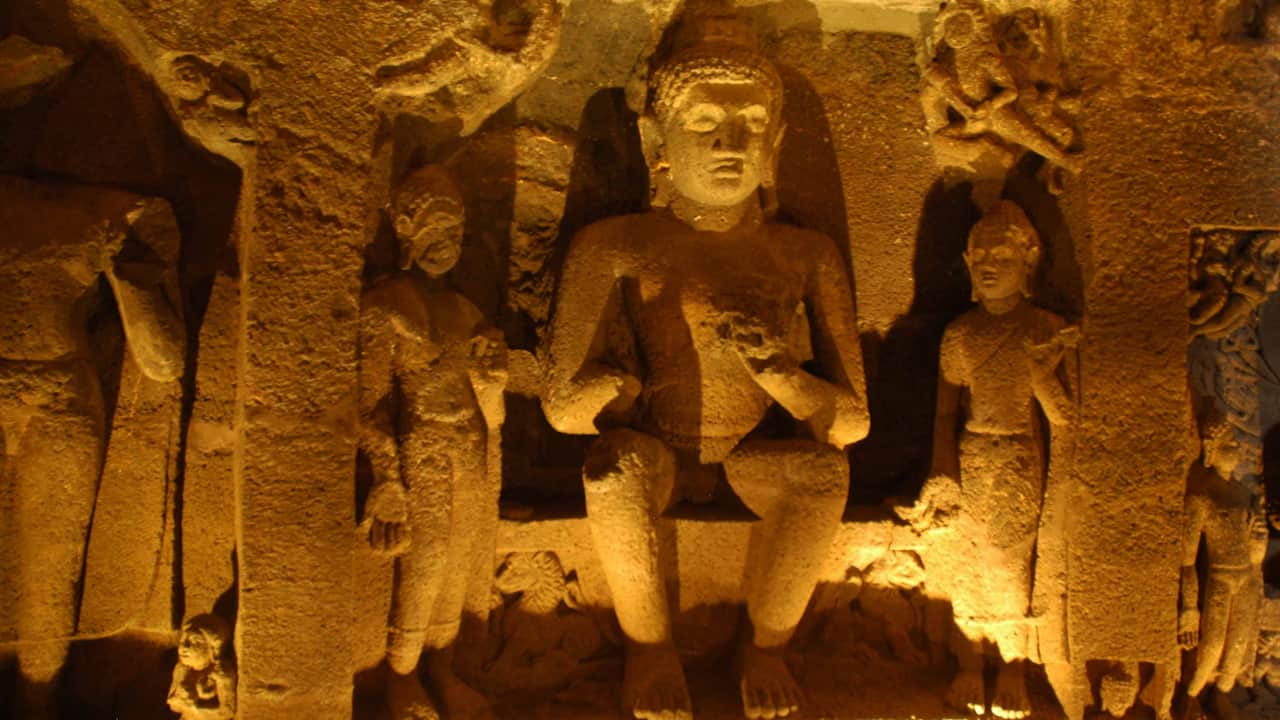 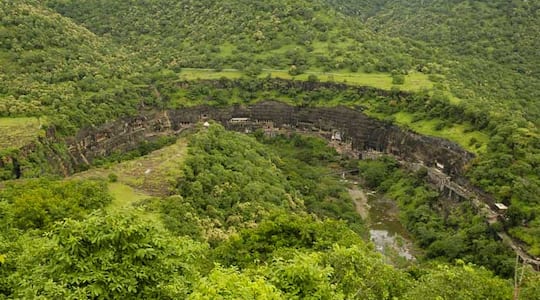