Tomb of the Lady

A symbol of remembrance, Bibi Ka Maqbara is almost indistinguishable from another memento of love and its inspiration, the Taj Mahal. It might be a derivative of the Taj but the mausoleum stands proud as an expression of a son’s love for his mother and has its own wandering evocations. Also called the Tomb of the Lady, Bibi Ka Maqbara was designed by Ataullah, the son of Ahmad Lahauri, the architect of the Taj Mahal which explains its appearance heavily based on the prime marvel. Related to each other in ways more than one yet separated by time, magnitude and miles both the mausoleums are exemplary depictions of love, memory and loss. While the first memorial, Taj Mahal belongs to Aurangzeb’s mother, the second, Bibi Ka Maqbara is dedicated to his wife – both the tombs immortalising these women in the chapters of history and alluding to the despotic yet the last influential Mughal emperor.

Built in 1668 the Tomb of Rabia Durani or Bibi Ka Maqbara was erected by Azam Shah, the son of Aurangzeb to commemorate his mother Dilras Begum who was titled Rabia Durani post her death. Being the spitting image of the Taj Mahal, the mausoleum is also called the Taj of the Deccan or the Dakkhani Taj. The north of the country is dotted with the specimens of the Mughal architectural magnificence, Bibi Ka Maqbara stands as a lone soul in the southern part. It was Aurangzeb’s long-standing governorship of Aurangabad that the shrine came to exist in the city and is today one of the most famous historical monuments in Maharashtra.

The story of Dilras Banu is nothing short of a fairytale. Born in the Safavid royal family of Iran, princess Dilras was the daughter of Shahnawaz Khan who was the then viceroy of the state of Gujarat. She married Aurangzeb in 1637 thus becoming his first consort and wife. Together they had five children and after delivering her fifth child, Dilras died. Both Aurangzeb and his eldest son, Azam Shah couldn’t bear the loss of the most important woman in their lives. It is said that the father-son duo were grief stricken for months and it took great efforts for them to come out of the state of shock. It was then in 1668 that Azam Shah ordered for a mausoleum to be built for his beloved mother on the lines of Taj Mahal, which was the resting place of Banu’s mother-in-law and Aurangzeb’s mother, Mumtaz Mahal. Both the women died because of complications developed through childbirth.

The tomb was to be more splendid than the Taj itself but due to strict adherence to the tight budget allocated for the construction, the mausoleum could only result in an arduous emulation. The Mughal architects led great importance on having a stream passing by the structures they erected with a garden based on a Charbagh pattern. Bibi Ka Maqbara is no different. There was a time when River Kham could be seen flowing behind the tomb. The Maqbara also has a Charbagh-styled garden and it sits pretty right in the centre with structures in the four directions. To the north is a 12-door Baradari, south is where the main entrance is, to the west is a mosque and facing the east is Aina khana or the mirror chamber.

The white dome of the Maqbara has panels adorned with intricate designs of flowers. The maqbara is graced by four minarets on corners with stairs leading to the tomb on three sides. The pathways are decorated with trees on both the sides. There is a water pool along with octagonal-shaped cisterns and the centre of the pathway consists of 61 fountains and 488 ft long and 96 feet broad reservoirs.

Bibi Ka Maqbara timings are 8 am to 8 pm.

You can visit Bibi Ka Maqbara at Begumpura, Aurangabad, Maharashtra 431004. It is located approximately 3 km from the city centre.

Bibi Ka Maqbara is open on all days of the week between 8 in the morning till 8 in the evening which are the visiting hours for the tomb.

How to Reach Bibi Ka Maqbara

Situated in Maharashtra, Aurangabad is a popular tourist magnet attracting visitors round the year for its various monuments and is easily accessible from Mumbai. It is approximately 333 km from Mumbai and can be reached in a span of about 7 hours from road via NH160 Nagpur-Aurangabad highway. Maharashtra State Road Transport Corporation (MRCTC) runs a Parivaran bus daily from Mumbai to Aurangabad. If you want to cover the distance by air then a Mumbai to Aurangabad flight will take an average time of around 1 hour and 10 minutes. Currently, Air India and Jet Airways operate on the route.

Aurangabad Airport in Chikkalthana is 11 km from Bibi Ka Maqbara. There are flights available from Delhi, Mumbai and Hyderabad.

The metro station in Aurangabad is under construction.

Central Bus Stand is the nearest bus stand near Bibi Ka Maqbara and the distance between the two is 3.4 km.

If you are planning to book Bibi Ka Maqbara tickets online then search no further as you can reserve your entry to the tomb on Yatra. To book entry tickets to Bibi Ka Maqbara, visit Yatra.com and type the monument name and click on ‘Book Now’. This will take you to the next page where you will be asked to fill in details such as email id, phone number, name, age and country. Alternatively, you can directly sign up if you already have an account with Yatra. After filling in the form, click on the ‘Proceed to Payment’. The Bibi Ka Maqbara ticket booking details will be sent to the email id provided by you.

Aurangabad is a tourist hub and is dotted with places of historical importance exhibiting architectural excellence. Be it the caves serving as the last remains of the ancientry of the place or its forts, gates, lakes and temples - Auranagabad is full of tourist attractions and you should pre-book monuments in Aurangabad before your visit. You should include Ajanta and Ellora Caves, Daulatabad Fort, Tomb of Aurangzeb as some of the must-visits in your itinerary while planning a trip to the city. Some of the must-see places of interest near Bibi Ka Maqbara are Aurangabad Caves (1.3 km), Panchakki (2.1 km) and Jama Masjid (2.4 km).

There is an array of hotels in Aurangabad ranging from budget to star-rated properties. A few options near Bibi Ka Maqbara are Meadows Resort and Spa, Hotel Green Olive, Vivanta by Taj Aurangabad, and Ambassador Ajanata. 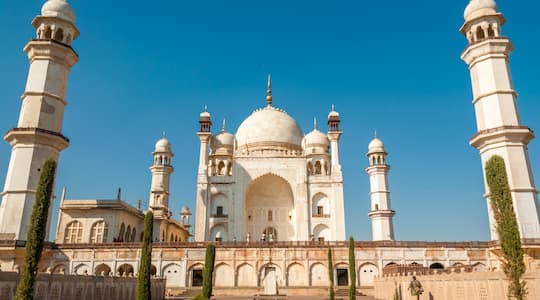 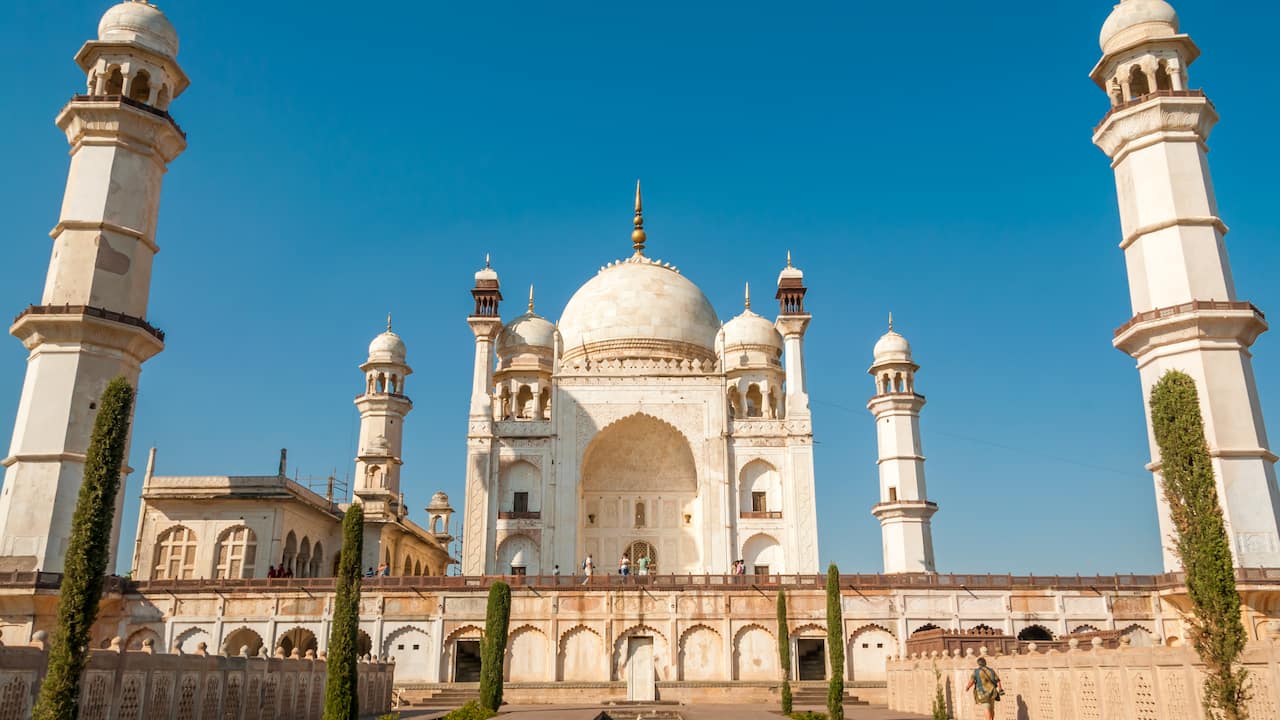