A whiff of the antiquated mystery sits heavy in the air on the 2 km long stretch of what must have been an arduous task of carving these magnificent caves out of rocks. One of the largest ancient rock-cut cave temples in the world, Ellora Caves are a UNESCO World Heritage Site. A confluence of ideas and shared creative intensities gave shape to one of the most stupendous works of art in the ancient India.

Built during 600 to 1000 CE, Ellora Caves lie in the Sahyadri hills in Aurangabad and is a 2-hour drive from the Ajanta Caves. The Ellora Caves comprise Hindu, Buddhist and Jain temples and over a 100 caves with only 34 open to the public excavated from the basalt cliffs in the Charanandari hills. Ellora Caves served as lodgings to the travelling Buddhist and Jain monks besides being a site for the trade route. There are 17 Hindu caves, 12 Buddhist and five Jain caves with deities, carvings and even monasteries depicting the mythology of each religion. These caves constructed near each other stand for the harmony and solidarity among all faiths and beliefs.

A part of the Hindu and Buddhist Caves were built during the Rashtrakuta dynasty, and the Jain Caves were built by the Yadav dynasty. It is not yet established as to which caves were built first - the Hindu or the Buddhist. Based on the archaeological evidence found at various sites it was deduced that there were essentially three major construction periods for the Ellora caves: early Hindu period from 550 to 600 CE, Buddhist period from 600 to 730 CE, and the final phase, the Jain and Hindu period lasting from 730 to 950 CE.

Although the deities and idols in the caves have been damaged, the paintings, carvings remain as it is. The inscriptions on the walls of the Ellora Caves date back to the 6th century and a famous one is the Rashtrakuta Dantidurga on the mandapa of Cave 15 inscribed during 753 to 757 AD. Out of all the excavations done, Cave 16 or Kailasha temple - a monument dedicated to Shiva is the largest single monolithic rock excavated in the world. It was built during 757-783 AD by Krishna I who was the uncle of Dantidurga.

Built during the 6th to 8th century in the Kalachuris period, the Hindu Caves were built in two phases. Caves 14, 15 , 16 were built in the Rashtrakuta period. The early Hindu caves were dedicated to Shiva with inscriptions depicting the mythology related to other gods as well. A typical attribute of these temples was the lingam-yoni placed in the centre of the shrine.

Kailasha Temple, Cave 16: Carved out of a single rock, this temple is one of its kind in the world. Dedicated to Shiva, the temple is based on Shiva’s abode - Mt Kailash. It comprises the typical features of a Hindu temple namely: the sanctum which houses the lingam-yoni, a space for circumambulation, an assembly hall, a gateway, shrines based on the square pattern. Other shrines in the temple carved out of the same rock are dedicated to Vishnu, Saraswati, Ganga, Vedic and non-Vedic gods. The mandapa is supported by a Dravidian shikhara and16 pillars with a Nandi sitting in front of the temple. It is believed that the artists had to move around 3 million cubic ft stone weighing 200,000 tonnes to excavate the temple. It was built by the Rashtrkuta king, Krishna I.

Situated in the south of the precinct, these caves are estimated to have been built during 600 to 730 CE. It was first believed that the Buddhist Caves were built before the Hindu Caves but this theory was debunked and with enough evidence to substantiate, it was established that the Hindu caves were constructed before the Buddhist came into being. The earliest Buddhist cave to be built was Cave 6, with Cave 11 and 12 being the last. These caves feature monasteries, shrines which include bodhisattvas, and carvings of Buddha.

Vishvakarma Cave, Cave 10: Built around 650 CE the cave is also known as the Carpenter’s Cave because of the finishing of the rock which looks like the wooden beam. Inside the stupa hall, lies the 15 ft statue of Buddha resting in a preaching pose. The cave is the dedicated prayer house among all the caves here and has eight cells and also a portico.

The five caves lying to the north of the Ellora Caves belonging to the Digambara sect were excavated in the 9th to 10th century. Smaller than the Hindu and Buddhist Caves, these have the architectural attributes such as mandapa and a pillared verandah. The Jain temples have the carvings of the yaksa and yaksi, gods and goddesses, and devotees all depicting the Jain mythological sensibilities of that time.

Designed on the same lines as that of the original Kailasha temple or Cave 16 the temple was built in the 9th century along with the Indra Sabha, Cave 32. The temple contains two gigantic statues of Indra, one an eight-armed and the other a 12-armed and in dancing pose. The number of arms depicts Indra’s poses during the dance. The cave also features other deities, and dancers.

Ellora Caves opening hours are sunrise to sunset. The timings for Ellora Caves are 8 in the morning till 5.30 in the evening.

Ellora Caves are closed on Tuesdays. The caves can be visited during rest of the week. The best time to visit Ellora Caves is during November to March.

How to Reach Ellora Caves

Situated almost 27 km from Aurangabad city, Ellora Caves can be reached easily via buses and taxis. There are private taxi stands in Aurangabad which offer a trip to the caves and back starting at Rs 1,000 depending on the car type. The drive will take you around an hour to reach the caves. The Maharashtra State Road Transport Corporation (MSRTC) operates bus tours to Ellora Caves in AC Volvo coaches. The guided tour buses depart the Central Bus Stand in Aurangabad in the morning and cover other attractions on the route. Alternatively, you can go for the regular state-run buses.

Central Bus Stand in Aurangabad is 27 km from the Ellora Caves.

Aurangabad Airport is 35 km from the Ellora Caves. It connects Mumbai, Delhi and Hyderabad.

You can now make the online Ellora Caves ticket booking for yourself, family and friends by logging on to Yatra.com. Visit the website and book Ellora Caves tickets online and reserve your entry to the site from the comfort of your home or office. Not just Ellora Caves, you can book Ajanta Caves, Aurangabad Caves and other monuments in Aurangabad.

The Ellora Caves is a historical site located in the Marathwada region of Maharashtra. The caves of this monument are excavations from the Charanandri Hills. These caves were excavated during the rule of Hindu dynasties such as Rashtrakutas and Yadavas. These caves were known to be a resting stop for pilgrims as well as a worshipping site because of its temples and monasteries. These caves were also popular as they were located on the South Asian trade route. 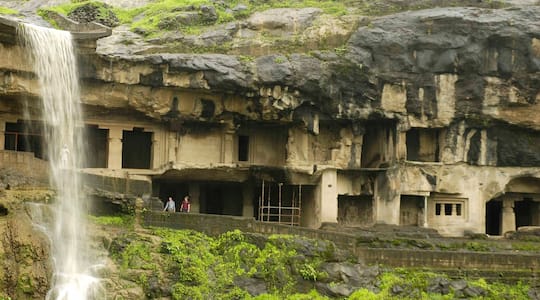 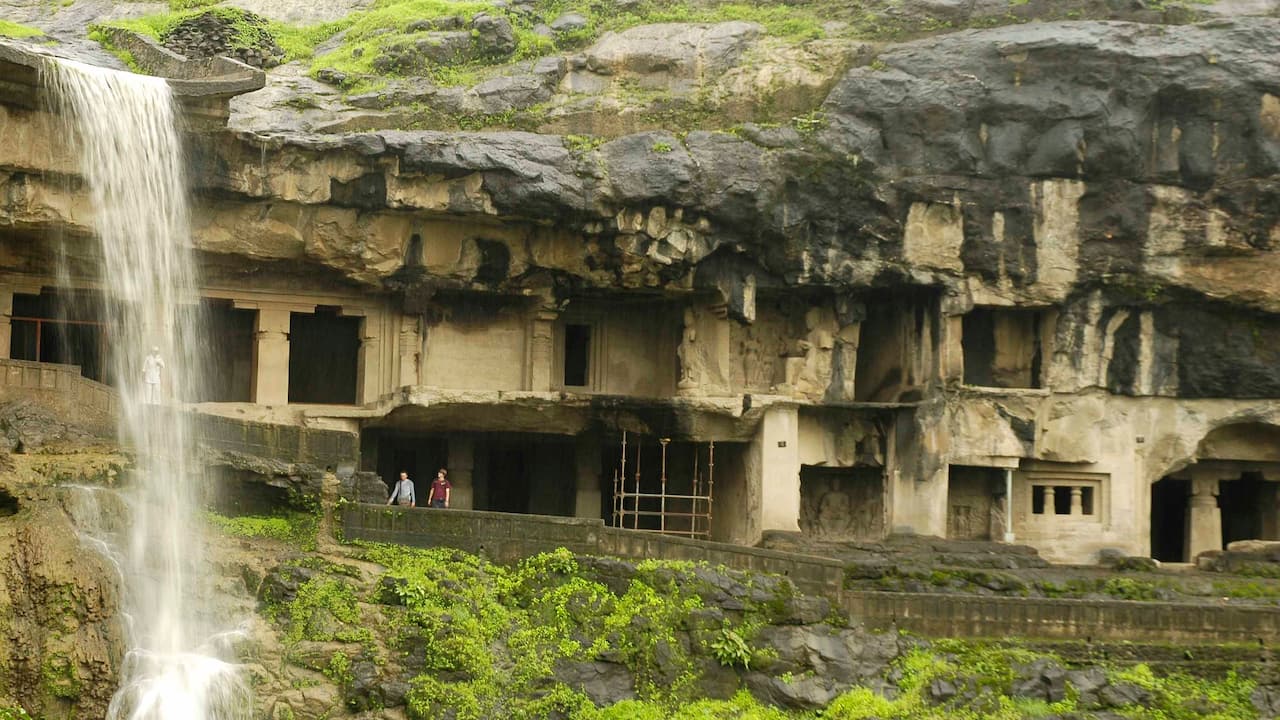 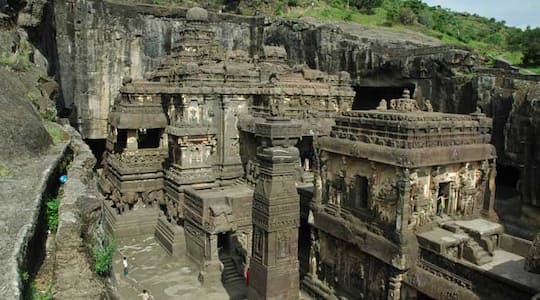 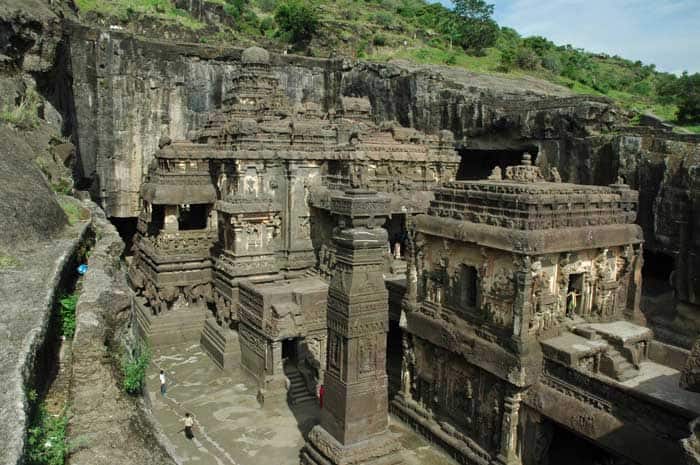 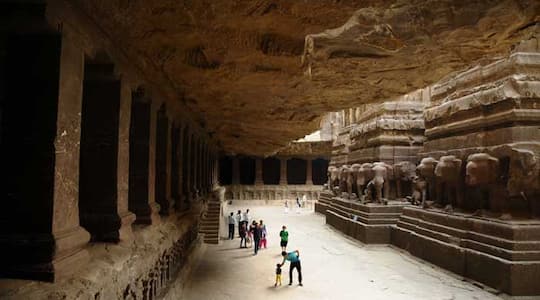 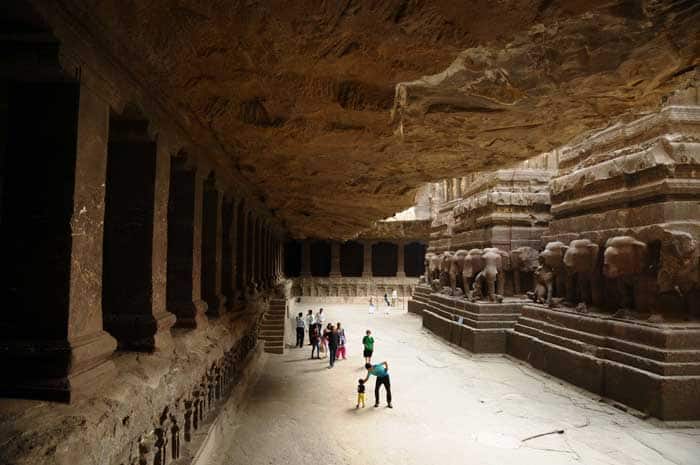 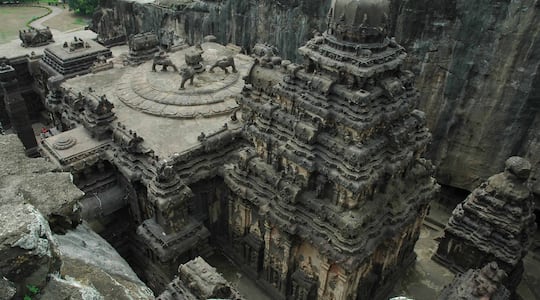 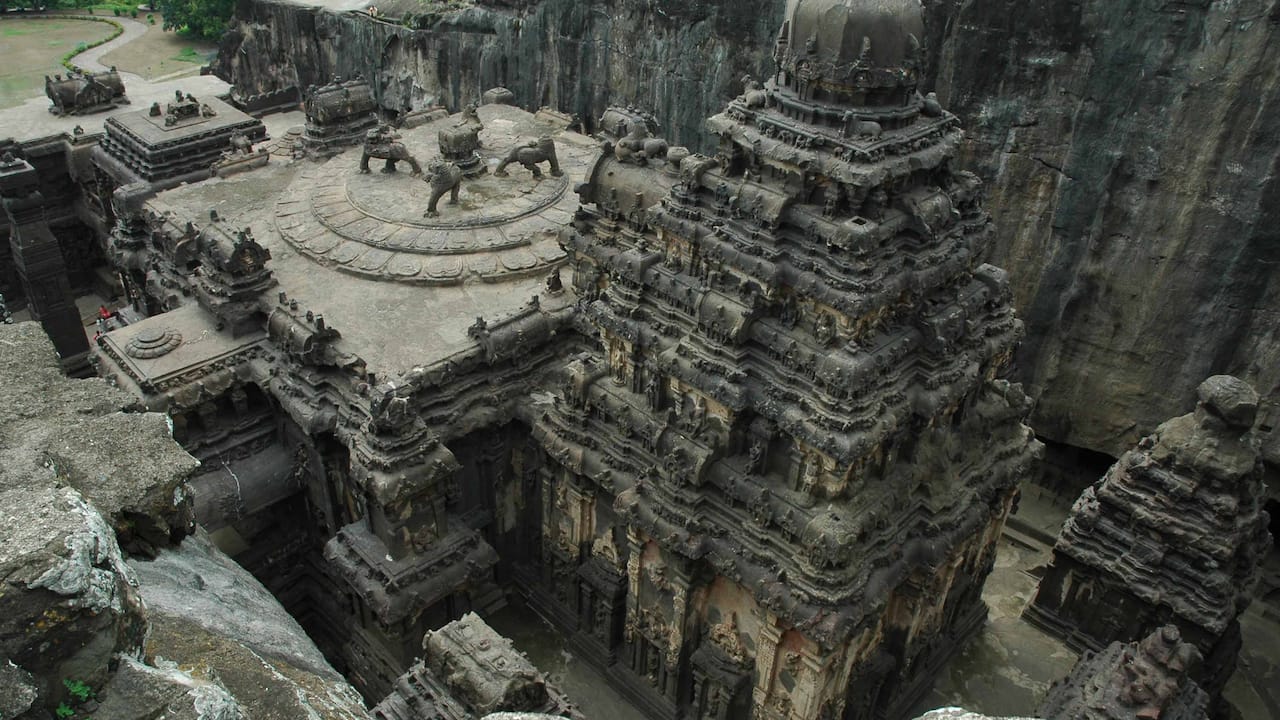