Archaeological Site, Dholavira is nestled at Khadirbet in Kutch District of Gujarat. Surrounded by the salt waste of the Rann of Kutch, the cityscape consisted of a bipartite citadel, a middle town and a lower town. Also, it consisted of two stadia, an annexe and a series of reservoirs all set within a fortification running on all four sides. Dholavira is older than the Egyptian pyramids and displays remnants of a highly sophisticated urban culture that was way ahead of its time. The Dholavira museum exhibits information and artifacts related to the Dholavira archaeological site. Some of the significant objects unearthed during excavation from the site are a number of seals and sealing, graduated scale made on a charred rib bone of an animal, beads of semi-precious stones, copper, gold, shell, and terracotta. The unicorn animal figure is a prime discovery of its kind among the terracotta figurines. The museum also has some antiquities indicating its link with Mesopotamia. Every year, scholars, tourists, researchers and students visit this museum situated at the entrance of the site. Here, one can find the archaeological remains belonging to the Harappan culture, excavated by the Archaeological Survey of India. 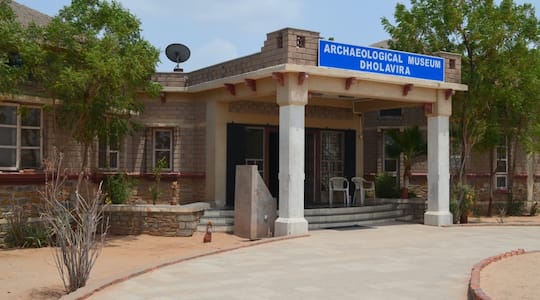