Muthu Krishnappa Nayak, a Madurai Nayak ruler, built Dindigul Fort. The structure is 270 metres tall and almost 3 kilometres in circumference. At the time of its construction, it contained a total of 48 rooms that housed soldiers, commanders, and prisoners of war. There were also kitchens, stables, and meeting halls for military leaders. Perched on a sheer rock face, the fort and its surroundings are intimidating and breath-taking in equal parts. Its location atop a 380 metre hill affords a magnificent view. On the other hand, the southern portion has never had the need for man-made protection simply because of its steepness. At the time of its establishment, cannons were installed at regular intervals along with other powerful ammunition. Furthermore, as a countermeasure against enemy attacks, Dindigul was built as a double-walled fortress. Secure storage facilities were built to stow away extra reserves of guns and artillery. And not only were they built to withstand man-made threats, but also ward off natural threats such as rainwater. On the other hand, since no resource was to go to waste, reservoirs were built in to harvest rain water. As a military installation, Dindigul was not only built to withstand fierce enemy attacks, but displays architectural skill and deftness. 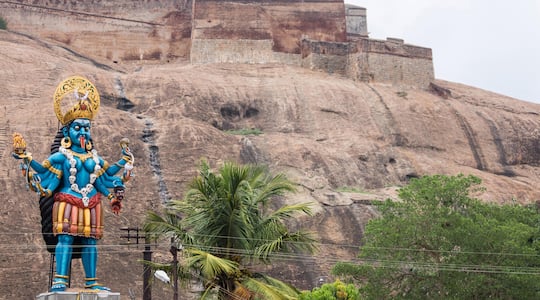