The short-lived capital of Emperor Akbar between 1571 and 1585, Fatehpur Sikri was a fortified city about 40 km west of Agra, and a fine specimen of Indo-Islamic architecture. Fatehpur Sikri held a special meaning for Akbar after the time he visited the village of Sikri and was foretold about the birth of a son and heir to the Mughal throne, by renowned sufi saint, Shaikh Salim Chishti. Akbar was thrilled when the prophecy came true, and after Jahangir’s second birthday commenced the construction of what would be his capital for days to come. ‘Fatehpur’ meaning city of victory seemed apt a name for the new capital city that brought with it happy tidings of Akbar’s Gujarat campaign which led to Gujarat becoming a Mughal province in 1573.

Behold the way the turrets and the domes of Fatehpur Sikri, a UNESCO World Heritage Site, hem a sunset sky doused in all kinds of crimson by plunging themselves in abject darkness. To say the least, it is a breathtaking view of the sunrise and sunset from its 11-kilometre-long ramparts with walls on three sides and a lake on the fourth. Built on a 40-metre-high promontory, its rhombus-shaped layout and the architecture of its most important structures, the mosque, the three palaces and the gardens are believed to have been inspired by the Emperor’s interest in the arts and architecture. The grand mosque, the Imperial Palace Complex, and the marble tomb of Salim Chishti for their detailing and craftsmanship are comparable only to the Taj Mahal. And across the complex, you will witness this fine tapestry of Hindu and Islamic styles merging into one another, and yet retaining their individual fluidity and unique geometry.

Water shortage in the area and Akbar’s death in 1605 led to the abandonment of the site, though the mosque remained functional, and is so till date.

The carvings, the open courtyards and the general aura of this ancient walled city will leave you breathless. There is a certain palpable mysticism in its air and a loftiness in the panoramic views its ramparts afford. While the structure can be accessed through a number of gates on the eight-kilometre-long fort wall, such as the Delhi Gate, Lal gate, Agra Gate, Chandanpal Gate, Gwalior Gate, Birbal’s Gate, Chor Gate, Ajmeri Gate and Tehra Gate, here are some important buildings on the complex you cannot miss.

Buland Darwaza: Located on the south wall of the mosque, Buland Darwaza is a 55-metre-high structure and a mark of Emperor Akbar’s victory in Gujarat. This addition was made to Fatehpur Sikri after about five years of the construction of the mosque. The columned central porch is made of three entrances of which the central one is the largest and popularly dubbed the Horseshoe Gate, after the numerous horseshoes nailed on it as a symbol of good luck. Buland Darwaza is one of the most photographed structures in the Fatehpur Sikri complex.

Tomb of Salim Chishti: Sheikh Salim Chishti was a known sufi saint in the Sikri village who had predicted the birth of Akbar’s son Jahangir, which eventually led to Akbar moving his capital here. The Sufi saint lies encased in a white marble tomb in Jama Masjid’s rambling courtyard. The tomb is actually a single-storey building constructed around a square chamber in the center that holds the grave of the Sufi saint in a wooden canopy embellished with mother-of-pearls. Akbar’s successful campaign in Gujarat also led to borrowing of a leaf or two from its architectural history evident in the tomb of the saint that was inspired by the early 15th century mausoleum from the Gujarat Sultanate period. The carved jaalis, the white marble brackets, the drooping eaves around the parapet are some of the eminent features of the tomb of Salim Chishti. Also, look up the red sandstone tomb of Islam Khan 1 to the east of Chishti’s own. Islam Khan was the grandson of the Sufi saint and a general in the Mughal army of Emperor Jahangir. Typical of Islamic tombs it is topped with a dome and 36 little domed chattris.

Jama Masjid: This congregational mosque, historians believe, is the first building to be constructed on the complex, and holds immense religious and spiritual significance. The sprawling courtyard of the Fatehpur Sikri Jama Masjid, the row of chattri designs on the sanctuary, the geometric patters typical of Islamic architecture, the fine white marble inlay decorations characterise what is the country’s most stunning mosque.

Panch Mahal: This five-storey columned structure has a unique architecture. The tiers on their way up diminish in size, finally petering out into a large domed chhatri on the top. The columns on every level are profound with carvings and total up to a 176. Historians believe this structure was a ladies court owing to a perforated stone screen which originally stood before the facade.

Palace of Jodha Bai: The largest and perhaps the most significant construction in the Imperial Complex is the palace of Akbar’s Rajput wife, Jodha Bai who was known for her beauty and charisma. The palace has high walls and a nine-metre-tall gate on the east for privacy. You will witness an interesting blend of Hindu elements and Islamic styles in the structure. Adjacent to the palace is the Hawa Mahal and the Mughal Charbagh-style garden.

Hiran Minar: Believed to be a memorial to Akbar’s favourite elephant, the Elephant Tower or Hiran Minar is actually a circular tower that has elephant tusks projected in stone. It later came to be known that the Hiran Minar served as a starting point for mile posts.

Birbal’s House: The witty and wise Birbal was the life of Akbar’s court. A Hindu, he was also the Emperor’s favourite minister. This was the house where Birbal lived. The structure is striking for the chajjas or sloping sunshades and the brackets that support it.

Diwan-i-Khas: This Hall of Private Audience is surmounted by four chattris and has a central pillar with a square base and an octagonal shape adorned with floral patterns. Don’t miss the 36 serpentine brackets that hold the little podium on which Akbar met the various religious delegates and carried out elaborate discussions on their faiths.

The Fatehpur Sikri visiting hours are between sunrise and sunset.

Fatehpur Sikri remains open on all days of the week.

How to Reach Fatehpur Sikri

Being about 40 kilometres from Agra, the ideal way to visit Emperor Akbar’s former capital is by car. You can either drive down or hire a taxi service in Agra, and club it with your visit to the Taj Mahal and Agra Fort. However, these are the alternate ways you can travel to Fatehpur Sikri.

There is no metro rail connectivity in this area. Although a Mass Rapid Transit System in Agra is due to kickoff in 2020, connecting the city with its various tourist attractions.

You can take a bus from Agra’s biggest bus terminal, the Idgah bus station which is also pretty close to the Agra Cantt railway station. There are several Uttar Pradesh State Road Transport Corporation (UPSRTC) buses that depart from the Idgah terminal and take you to Fatehpur Sikri in about an hour and a half. At Fatehpur Sikri, you need to disembark at a point near the bazaar and clock tower, quite close to the Jama Masjid. This is in order to prevent damage to the building from vehicular fumes. To do the remaining uphill climb, hire a CNG operated auto-rickshaw to drop you off at the main gate. This bus service from Idgah bus station can be availed any time between 06:00 am and 07:00 pm.

The Fatehpur Sikri railway station (FTS) is the closest rail head to Fatehpur Sikri about 300 metres away. While this is a small station, you have some passenger trains from Idgah railway station in Agra halting here. The long-distance Avadh Express also stops at FTS. However, Agra Cantt is Agra’s important railway station with fantastic rail connectivity to the other parts of the country. From New Delhi, you could take the Gatimaan Express or the Shatabdi Express to arrive into Agra Cantt.

The Kheria Airport or the Agra Airport is about 33 kilometres from Fatehpur Sikri and is the closest airport. Although it is a military base, it serves as a public airport and has a decent connectivity from the capital city.

While there are a several hotels in Fatehpur Sikri, it might feel a bit isolated. You can do better by staying at one of the hotels in Agra and making a day trip to the monument complex.

While you can book a Fatehpur Sikri ticket from the site itself, you will save yourself the hassle of waiting in a queue by making the booking online. Getting a Fatehpur Sikri online ticket is a walk in the park. Just go on Yatra’s Monuments section, select Fatehpur Sikri Monument Complex from the search box and you will get all the details related to the monument and the price point. Simply add it to your cart and head to the payment gateway. You will get a email confirmation and copy of your ticket. Archaeological Survey of India (ASI) website is another place to get an online ticket.

The autumn to winter months between October and March are the best to explore this monument complex. The pleasant to nippy weather makes it ideal for all the walking you need to do, and to also take in the scenery from the ramparts. The local bazaar around the fort is also a great haunt for unique souvenirs from handicraft, junk jewellery to embellished fabrics. Bring on sturdy walking shoes and put your bargaining skills to test. 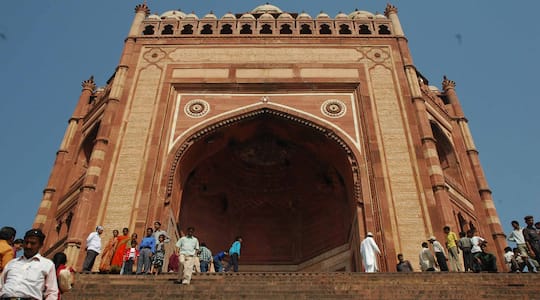 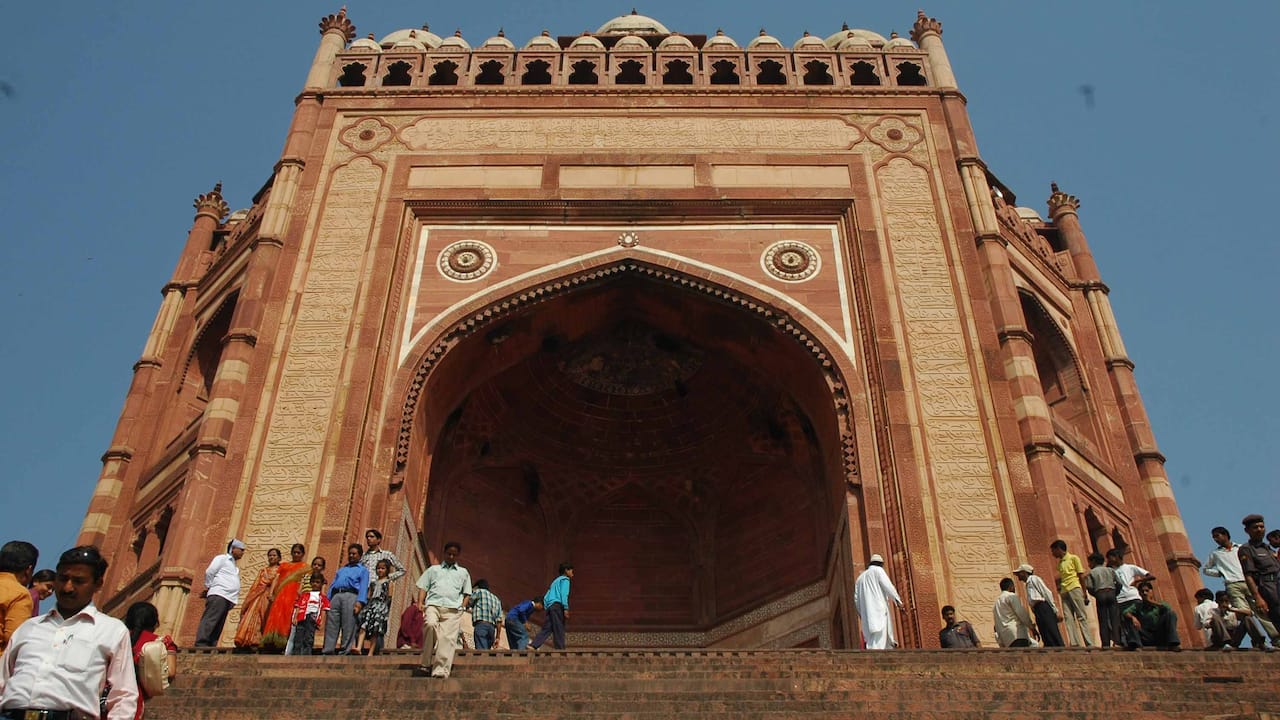 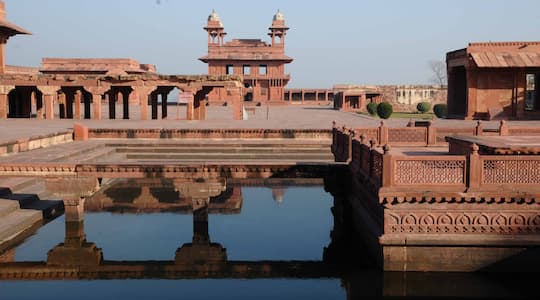 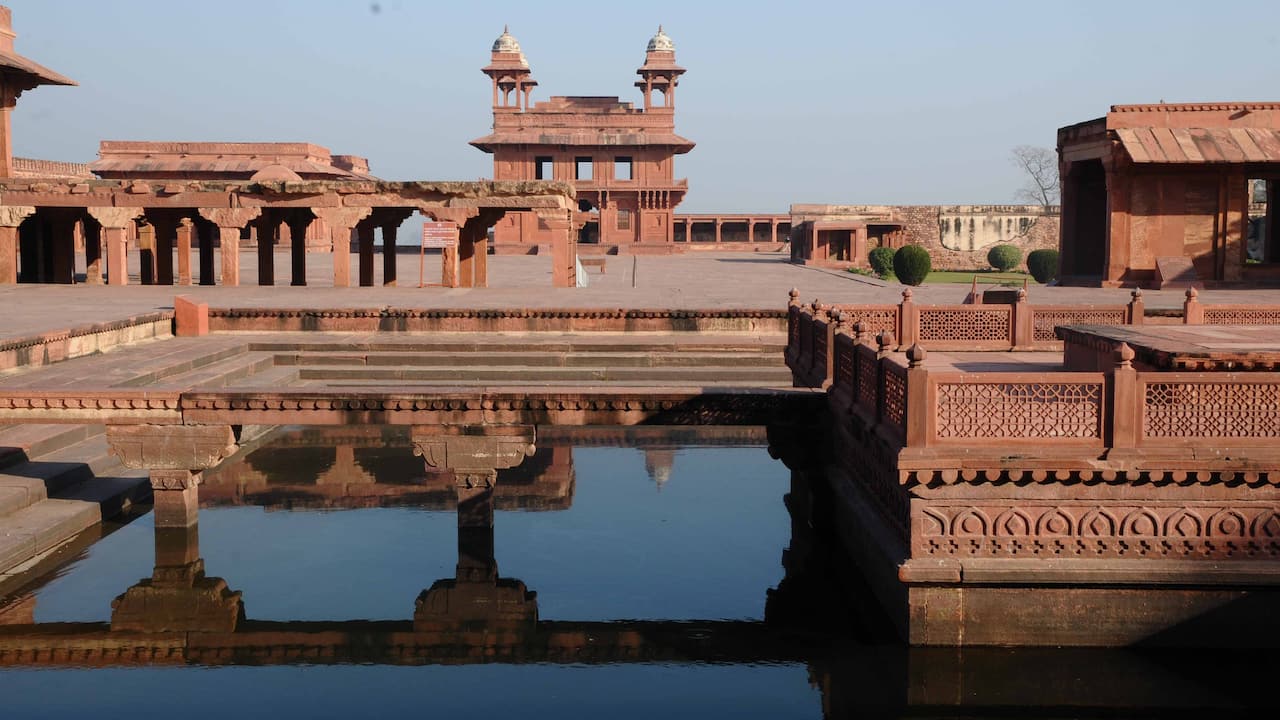 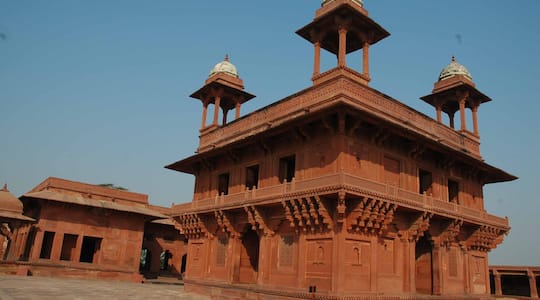 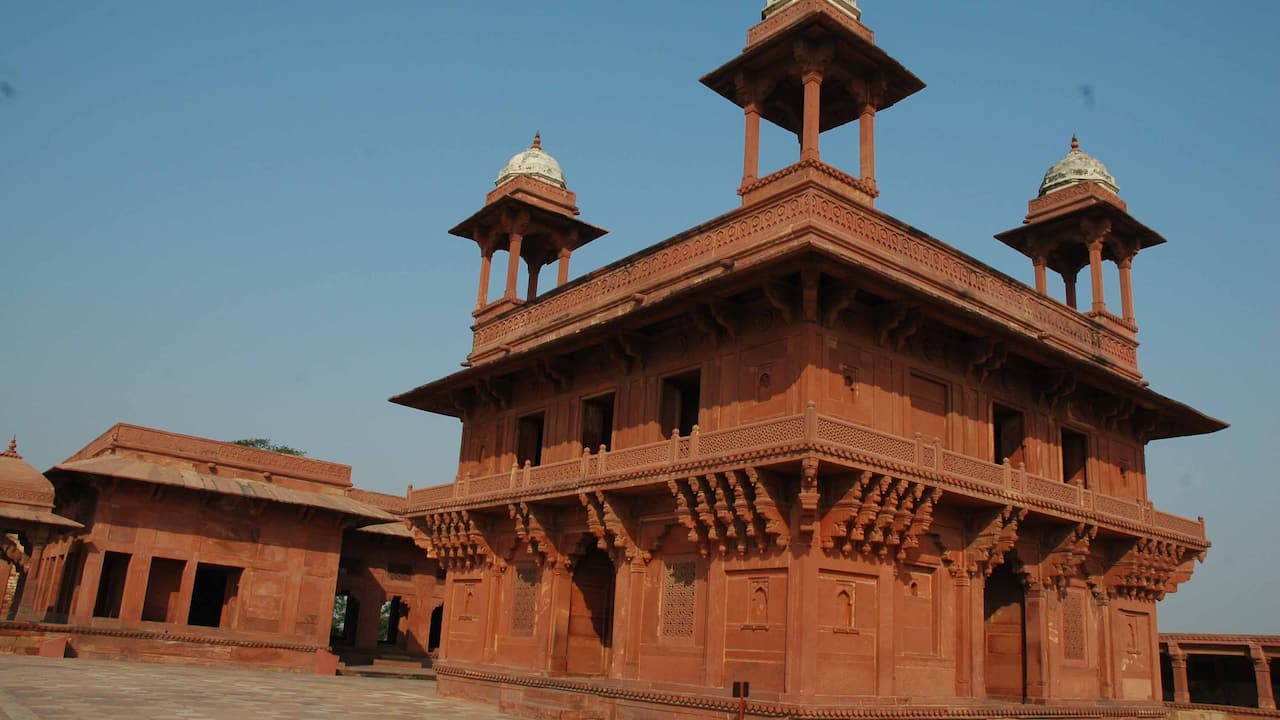 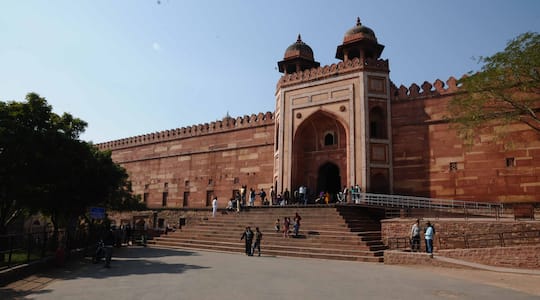 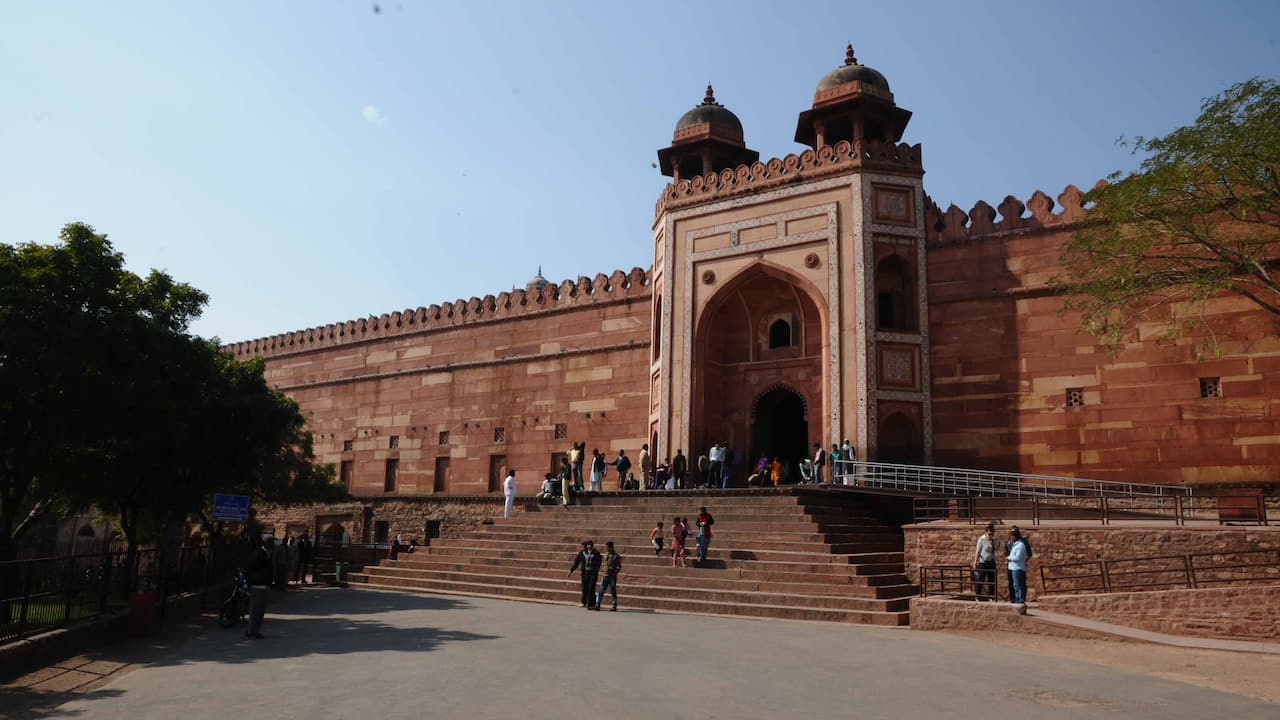