Nestled in the former Portuguese colonial capital of Old Goa, Archaeological Museum Of Goa is run by Archaeological Survey of India. It was set up in 1964 and was modernized in 1981–82. The museum, located near Church of St. Francis of Assisi, displays antiquities from ancient to the late medieval period in eight galleries. For tourists who are new to the city, the museum exhibits many objects from the Portuguese period in Goa including portrait paintings of governors and viceroys, pillars, wooden sculptures, postal stamps and capitals. Natural and artificial lights are used in the museum for displaying the portraits. Major attractions of the museum include Vishnu with 10 incarnations, Luis Vaz de Camees, Gajalakshmi, Surya, ivory sculptures of Jesus crucification, wooden sculpture of John the Baptist, bronze statue of Albuquerques (first governor of Goa), sati stone, portrait paintings of Vasco da Gama, Persian and Arabic inscription, Portuguese arms like rifle, swords and daggers. The Archaeological Museum Of Goa also has an exceptional collection of stamps and religious artifacts 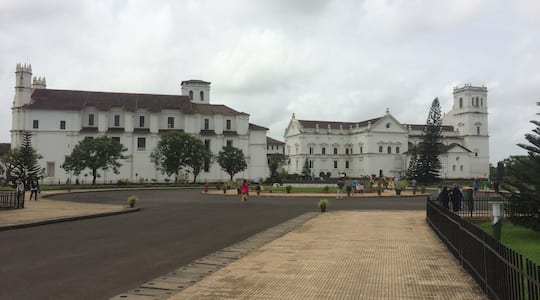