About Group of Monuments, Hampi

What might seem from a distance as an undulating terrain of giant boulders each balanced precariously on top of the other to form obscure shapes and patterns, is actually the majestic ruins of Hampi. A site of over 1600 monuments on a 41.5 sq km spread, the Group of Monuments at Hampi is a UNESCO World Heritage Site on the banks of the Tungabhadra River in east-central Karnataka close to the state border with Andhra Pradesh.

Though it is the Vijayanagara Empire which left an indelible mark on Hampi’s heritage by emerging as the richest and most prosperous Hindu empires, the site itself predates this grand southern empire. The Ashokan epigraphy, and its references in the Ramayana and Puranas as Pampaa Devi Tirtha Kshetra only corroborates the fact the Hampi is an ancient site, a part of the Maurya Empire during the 3rd Century BCE. Eventually in the 10th century it expanded into a centre for religion and education under the Chalukyas. Inscriptions traced back to the period state that its king, Kalyana Chalukya, granted land for the construction of the spectacular Virupaksha temple. Hampi flourished between 12th and 14th centuries under the Hoysala Empire who built majority of the temples you will find on the site, such as the Durga, Shiva and Hampadevi temples.

Destruction and Re-Birth of Hampi

The Hoysala Empire including its capital in south Karnataka called Dvarasamudra was pillaged and plundered by the Delhi Sultanate; first time in the early 14th century by Alauddin Khilji, and then again by Mohammad bin Tughlaq in 1326 CE. Out of the ruins of the short-lived Hoysala kingdom rose the magnanimous Vijayanagara Empire in 1336 CE. With a 200-year rule it emerged as the most famous Hindu empires in South India. And by 1500 CE, Hampi-Vijayanagara grew into what would be the world’s second largest medieval era city only after Beijing, not to mention, the country’s richest. Little wonder, the writings of European and Persian travellers refer to Hampi as a prosperous, grand and wealthy city on the banks of the Tungabhadra with multiple temples, trading markets, mandapams, forts, shrines, farms, royal complexes, water structures, pillared halls among others.

Hampi, even today, continues to draw religious significance owing to the presence of the Virupaksha temple, and a functional Adi-Shankara monastery.

You need a full day to explore the various sites that form the Hampi ruins. The Group of Monuments at Hampi are broadly classified into Hindu, Jain and Muslim monuments, comprising an array of market complexes, temples, shrines, hill monuments, water reservoir, elephant stables, community kitchens and fountains, mosque and tomb. Of all the structures, few still remain intact, and others largely discernible. A day in Hampi should include a visit to these monuments:

Virupaksha Temple & Market Complex: Of great religious significance, the Virupaksha temple is the oldest shrine on the site. Made up of smaller temples, a 160-foot gopuram, a Hindu monastery, a water tank, a community kitchen, and a 2460-foot stone market complex with a monolithic Nandi shrine on its east end, you will find segments of a Durga, Shiva and Pampaa Devi temples that go back to the 11th century. But the expansive work on the temple complex took place during the Vijayanagara reign. The main temples face eastwards where the sanctums of Shiva, Durga and Pampaa Devi look out at the rising sun. The superstructure has a tower in the shape of a pyramid, rich in artwork as well as erotic sculptures.

Vitthala Temple & Market Complex: To the north-east of the Virupaksha temple and closer to the Tungabhadra river lies the three-kilometre-long Vitthala temple and market complex. A scared site for the Vijayanagara kings, the shrine is believed to have been constructed sometime early-to-mid 16th century. The temple is dedicated to Vitthala, considered an avatar of Lord Krishna. One of Hampi’s most photographed monuments is the Garuda shrine, which is a stunning stone chariot, at the Vitthala temple. The chariot has come to be synonymous with Hampi. The Garuda shrine faces an open-pillared mandapam with 56 carved stone beams of varying shapes, sizes and length.

Hazara Rama Temple: Inscriptions refer to this temple on the western part of the royal centre section as Ramachandra temple. Dating back to early 15th century, Hazara Rama served as a ceremonial temple for the kings. Look up the extensive artwork on both the inner and outer walls of the temple. You will come across depictions of a Holi procession, celebration of Mahavanami, marching elephants, galloping horses, musicians and dancers, and a frolicking crowd of people. On the inner wall lies what is an extensive narration of Ramayana, the great Hindu epic. The structure comprises a mandapam, a yagna hall with incredible ventilation for its time, aside from carvings dating back to the Hoysala period of Rama, Lakshmana, sita, Durga and Shiva-Parvati. The ruined temple complex is a treasure-trove of frescoes, inscriptions, and carvings related to Hindu faith.

Pattabhirama Temple Complex: Built in the early 16th century, and dedicated to Lord Rama, this was the hub of all cultural and economic activity. With an east-facing sanctum, the complex comprises a temple, a courtyard with columns, roofed mandapam and a gopuram entrance. The most fascinating feature of the temple is its 100-pillared hall, likely used as a place for having meals, rich in reliefs portraying Hindu gods and goddesses.

Queen’s Bath: This is a square water pavilion enclosed with a vaulted and pillared bay. The Indo-Islamic influences in the structure’s inner arches are a nod to an era when Hindu and Muslim schools of architecture thrived together. Close by, you can see the ruins of an aqueduct that was used to carry water from Hampi to drains, tanks and other parts of the city. The Vijayanagara Empire can be credited with building some of the most extensive water infrastructures in the South.

In general, the ruins site is open for viewing on all days of the week from sunrise to sunset, but here are the specifics.

Virupaksha Temple: The Hampi opening hours for the Virupaksha temple is from sunrise to sunset.

Vittala Temple: The Hampi visiting hours for the Vittala temple is between 6 am and 6 pm.

Heritage Museum at the Hampi Bazaar: This opens at 10 am and closes at 1 pm, and then again remains open between 3 pm and 6 pm.

Archaeology Museum at Kamalapura: About 5 kilometres from the Hampi ruins, this place has relics from the various empires that ruled Hampi and made it its capital. The museum is open from 10 am to 5 pm, but is closed on Fridays.

Zenena Enclosure, Elephant Stables and Lotus Mahal: You can explore this place between 6 am and 6 pm.

The cluster of monuments at Hampi are open on all days of the week except the Archaeology Museum at Kamalapura which stays shut on Fridays.

How to Reach Hampi

Hospet, the town on the Tungabhadra, about 13 kilometres away with a railway station is your gateway to Hampi. You can stay at one of the hotels in Hospet, and explore Hampi on a day trip.

Nearest metro station to Hampi: There is no metro rail connectivity available here.

Nearest Bus Stand to Hampi: Karnataka State Road Transport Corporation (KSRTC) operates buses from various cities in Karnataka to Hospet, and the other way round. You can even look up the interstate services that connect Karnataka with Goa, Maharashtra and Andhra Pradesh. Not to mention, there is an array of private operators who ply regular bus service to Hospet. From Hospet, you need to hire a taxi and hit NH13 for the remaining 13 kilometres to Hampi.

Nearest Railway Station to Hampi: There are several long distance express trains that pass via Hospet outside of passenger trains that link the nearby cities with Hospet. You can take your pick from direct trains of the likes of Hampi Express (Hubli - Hospet - Bangalore - Mysore), Amaravathi Express (Goa - Hubli - Hospet - Vijayawada - Vizag - Bhubaneswar - Kharagpur - Howrah), Garib Nawaz Express (Bangalore - Guntakal - Hospet - Hubli - Belgaum - Pune - Kalyan - Surat - Baroda - Ahmedabad - Ajmer). You can also look up the Haripriya Express (Kolhapur - Belgaum - Hubli - Hospet - Guntakal - Tirupati) and the Hyderabad - Kolhapur Express (Kolhapur - Belgaum - Hubli - Hospet - Guntakal - Raichur - Hyderabad). Else you can plan on getting trains either to Hubli or Guntakal. Hubli Junction to the west, and Guntakal Junction to the east are the major rail heads from Hampi. Further from these stations you can hop on a connecting train to Hospet.

Nearest Airport to Hampi: About 160 kilometres to the west of Hampi lies the nearest airport in Hubli. The next nearest is the Belgaum airport about 270 kilometres to the north-west of Hampi. Although, from both these airports there is limited connectivity to Hampi. A better idea would be to fly in to Bangalore, and then board the Hampi Express which will bring you to Hampi in an overnight.

The entry to the ruins of Hampi are free, and open on all days from sunrise to sunset. However, there are a few sites for which you need to buy a Hampi ticket from the counter right outside it.

Vittala temple: Open between 6 am and 6 pm, the Hampi entry ticket for Indians and tourists from SAARC and BIMSTEC countries is INR 30. For foreigners the Hampi entry ticket price is pegged at INR 500. The entry is free for all children up to the age of 15. Besides, you are free to take in your still camera at no additional cost.

Zenena Enclosure, Elephant Stables and Lotus Mahal: Open between 6 am and 6 pm, you can explore this site on an entry ticket to the Vittala temple.

Archaeology Museum at Kamalapura: Open between 10 am and 5 pm, the entry fee to explore this museum of priceless Hampi relics is INR 5 with no fee on children up to the age of 15. The museum remains closed on Fridays.

You can even get your Hampi online ticket by opening Yatra’s Monuments in India page which lists all the monuments under ASI. All you need to do is select the monument and add it to your cart, and eventually make the payment. It is a simple process and saves you the hassle of waiting in long queues outside the monument site.

October to February is the best time to visit the grand ruins of Hampi because the weather is pleasant and mildly cold in the evenings. If you are a photography enthusiast, you can get some great backdrops to the crumbling structures, and, of course, memories you will look back on for time to come.

Other Places to Visit in Hampi: 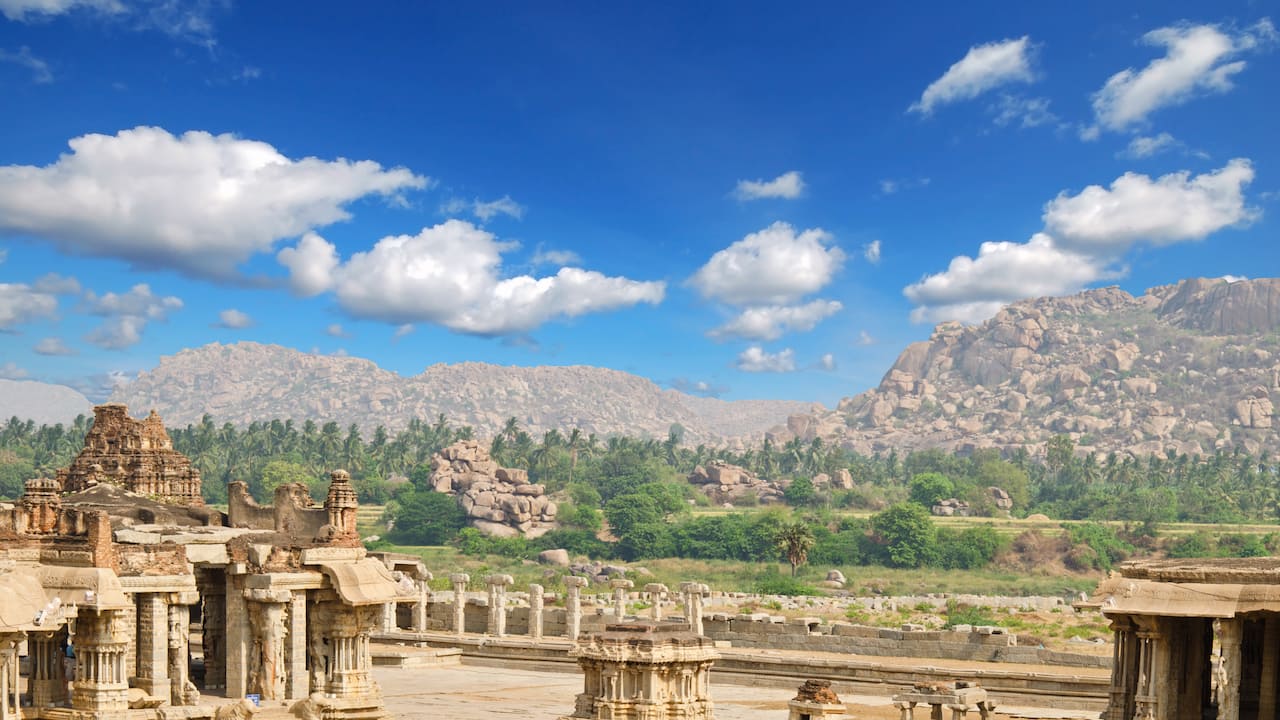