Dubbed the Arc de Triomphe of the east and Hyderabad’s most iconic structure, Charminar, was built to mark the eradication of the epidemic cholera that had ravaged the city in the 16th century. Lying on the east bank of the Musi river with the Laad Bazaar to its west and Makkah Masjid to the south-west, Charminar is a cultural and historical landmark that translates into four minars or pillars in Urdu. The area around the monument is also referred to as Charminar, and for a first-timer a tour of the Nizam city is incomplete without taking in the infectious energy of the place where it all began. Albeit traffic-ridden, the bazaars are still chaotic with their labyrinthine by-lanes heaving with hawkers, bangle sellers and food stalls.

The Charminar was built in 1591 after Muhammad Quli Qutb Shah, the fifth king of the Qutb Shahi dynasty, moved his capital from Golconda, due to shortage of water, to Hyderabad city. Listed under the Archaeological Survey of India, theories abound on the reason for the construction of the Charminar. However, the two most probable ones historians rely on include the moving of capitals from Golconda to Hyderabad under Muhammad Quli Qutb Shah who prayed for the end of Cholera that had caused many deaths in his city, and had taken an oath to build a mosque on the site in which he prayed. Marking the end of the plague, Charminar stands on the very site. Persian texts, on the other hand, refer to a narration by a French traveller from the 17th century to the commemoration of the beginning of Islam’s second millennium year 1000 AH as the reason for the construction of the Charminar in 1591.

It is no surprise that the old city of Hyderabad came up around the Charminar, and its strategic positioning at the intersection of historical trade routes that connects the port city of Machilipatnam with the markets of Golconda.

Built in Indo-Islamic architectural style, Charminar is a limestone, granite, pulverised marble and mortar structure with four embellished minarets attached to the four arches. Only a year after the city of Hyderabad was founded in 1591, the construction of the Charminar was concluded. This 14,000 tonne building meant to serve as a madarsa and mosque was built in a way that on opening the fort doors, the minarets would loom out and throw open the entire expanse of the bustling Hyderabad city around it. A square base with 20-metre-long sides and four arches that open into the four streets with each minaret on the corner, Charminar stands out for these ornate 184-foot minarets that are rich in detailing and come with a double balcony. On top of each minaret is a bulbous dome, but Charminar’s minarets unlike the Taj Mahal’s are attached to the superstructure.

Not just Charminar’s strategic positioning or its significance in the history of Hyderabad, the structure still holds visitors in awe for its elaborate stucco work, and the fluidity in the placement of the balconies and balustrades. Legend has it that Muhammad Quli Qutb Shah built an underground tunnel connecting Charminar to Golconda Fort as an escape route in case of a siege. Though the location of the tunnel has not been ascertained till date.

In Qutb Shah’s reign, the western end of the open roof was a mosque while the remainder of the space served as a court. To get to the upper floor, there is a fleet of 149 steps. But it is the top floor of the four-storey building that houses the mosque. Charminar has two galleries one on top of the other, and over them is the terrace that comes with a stone balcony. The open space in the main gallery is meant for the Friday prayers.

Over the years, several changes were made to the structure, the most significant one being the addition of the giant clock in 1889.

Lad Bazaar: This Charminar market during the Qutb Shah dynasty, it is believed, had around 14,000 shops. Even today Lad Bazaar, or its more popular moniker, Charminar market is the address in Hyderabad for stunning glass and lac bangles, outside of jewellery, silks, spices, perfume oil, incense and other knickknacks. Plenty of Irani chai stalls too for you to take a breather from all the walking around.

Makkah Masjid: Get atop the first floor of Charminar for a panoramic view of the city and while you do, look out over another important landmark from the Qutb Shah reign, the Makkah Masjid. Commissioned by Muhammad Quli Qutb Shah, the central arch of this grand mosque has bricks made from the soil of Mecca, the holiest shrine in Islam.

Char Kaman & Gulzar Houz: To the north of Charminar are four arches that were built along with it in the 16th century, these arches are known by many names such as Char Kaman, Charminar Kaman, Kali Kaman and more. The fountain in the heart of the Char Kaman is called Gulzar Houz.

Though Charminar is open on all days of the week, it is best to avoid Fridays since it is the prayer days of the Muslims and the crowds surge to unbelievable proportions.

How to Reach Charminar

Nearest Metro Station to Charminar: Presently, there is no metro connectivity to the Charminar, but the Green line metro will soon roll out a route connecting the Charminar to other parts of the city.

Nearest bus stand to Charminar: The Charminar bus stop near Makkah Masjid on the Charminar Road in Panch Mohalla is the nearest bus stand to Charminar. It is about 800 metres away, and will take a brief 10-12 minute walk to get to the site. There are plenty Andhra Pradesh State Road Transport Corporation (APSRTC) buses that have a decent district service connecting Hyderabad to other, even smaller, parts of the city.

Nearest airport to Charminar: The Rajiv Gandhi International Airport in Shamshabad caters to domestic and international traffic to the city. All major domestic and international airlines operate to and from this airport, some of them include Air Asia, IndiGo, Jet Airways, Air India to SriLankan Airlines, Malaysia Airlines, British Airways, Cathay Pacific, Emirates and Etihad Airways. Rajiv Gandhi International Airport is about 20 kilometres from Charminar, and will take you approximately 45 minutes to get there.

The Charminar ticket price for Indian travellers and those from SAARC and BIMSTEC countries is INR 25. However, the Charminar entry ticket for foreigner is INR 300. The entry is free for children under the age of 15.

The Charminar is lit up between 7 pm and 9 pm, although closed to visitors by then, it is truly fascinating to behold it from a nearby street, and perhaps capture in your lens the monument that forms the city’s beating heart.

Other Places to Visit in Hyderabad

You can also check out other tourist places in Hyderabad like Golconda Fort, Hussain Sagar Lake, Ramoji Film City among others.

Things to Do in Hyderabad

A few things to do in Hyderabad are shopping for bangles in Laad Bazaar, spending an evening at Taj Falaknuma, indulge in rappelling at Bhongir Fort, sample haleem from Pista House.

Q. When was Charminar built? Who built it, and why?

A: Charminar, the Mosque of the four minarets, was built by Muhammad Quli Qutb Shah in 1591. He was the fifth sultan of the Qutb Shahi dynasty of Golkonda and founded the city of Hyderabad. It is said was built the sultan built Charminar to honour his wife, Bhagmati. Some say it was built to glorify and thank Allah for removing the plague from Hyderabad during the sultan's reign. The four pillars of Charminar are said to be dedicated to the first four caliphs of Islam.

Q. What is Charminar famous for?

A: Charminar is famous for its intricate architecture, which makes it one of the most recognized structures of India. The surrounding Laad Bazaar and the 400 years old mosque on the top floor of Charminar make it famous amongst locals as well as the tourists. One can also overlook another famous mosque Makkah Masjid from Charminar. On occasions like Eid, the place is worth visiting as it is lit and decorated beautifully.

Q. What is Charminar entry fee?

Q. What are the timings to visit Charminar?

Q. How to Reach Charminar via road, rail or air?

A: Nearest Airport to Charminar: Hyderabad Airport is located at a distance of 20 km from Charminar, which takes 48 minutes to reach if you take a cab from the airport. Also, many APSRTC buses are available outside the airport to take you to the monument.
Nearest Railway Station to Charminar: The nearest railway station to Charminar is Nampally railway station. It is 6 km away and takes about 21 minutes travel time. You can book an Uber or Ola or take a local taxi or auto to reach Charminar from the railway station.
By Road: Auto-rickshaws are available readily in Hyderabad, and are the most economical way to commute in the city. You can take an auto from anywhere near Charminar to reach the monument. 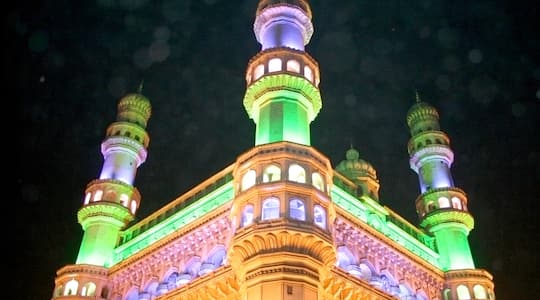 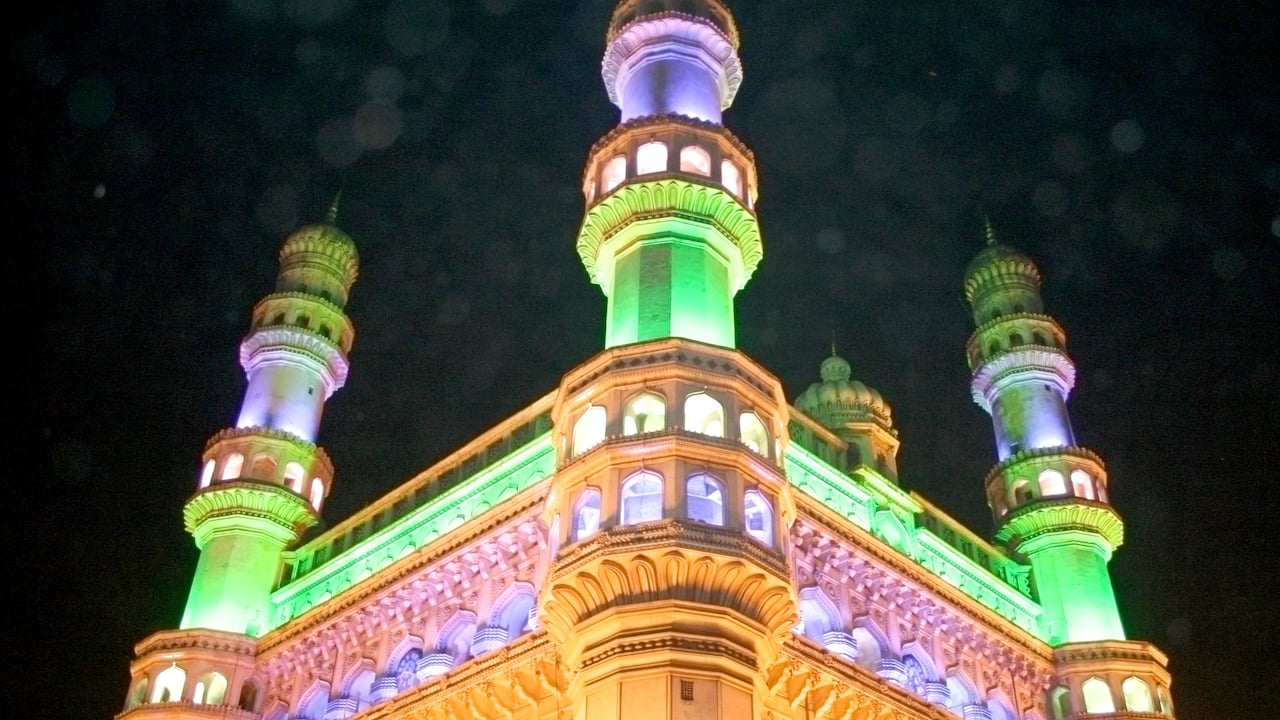