Jaunpur is a very small town situated on the Gomti River bank, around 60 km north-west of Varanasi in Uttar Pradesh. The famous old fort situated here- the Jaunpur Fort is also known as Royal Fort or Shahi Qila. Located 2.2 km from Jaunpur, this fort is one of the primary tourist spots of the city. The majority of the material used to fabricate the fort once belonged to the palaces and temples of the Rathore rulers of Kannauj. These temples were annihilated by Muslim intruders. The walls, bastions, and the gates of this fort are coated with Ashlar stones on the external surface. The fort was demolished by the Lodhis who succeeded the Tughlaqs after a hundred years. It was, in any case, largely repaired and revamped during the rule of Mughal rulers Akbar and Humayun. This fort was rebuilt by Ibrahim Naib Barbak, a chief of Firoz Shah Tughlak between 1376 AD and 1377 AD. The previous version was constructed on a mound and was known as Kerrar Fort. The fort was captured by the British government but was again devastated amidst the First War of Indian Independence in 1857. 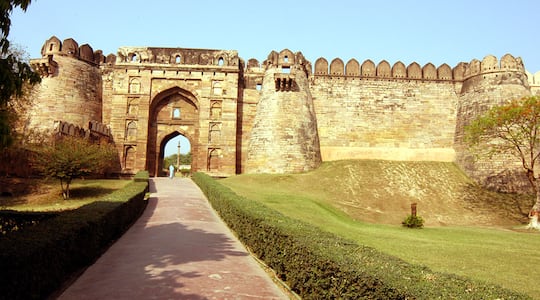