About Caves, Temples and Inscriptions, Junnar

Located on the southern bank of Kukdi River near Pune, Junnar caves are the largest excavation in the area spread over four hills. There are about 200 caves and dwelling areas carved in rocks. The area has 24 inscriptions naming the donors who helped in building the complex, including members of royal families, a minister of Maharathi Nahapana, common people as well as Yavanas (Greeks). The Junnar caves can be classified into four sub-groups: 1. Tuljalena: Located on the Tuljabai hill, this is the smallest group with 11 caves situated together in a row and faces roughly east-north east, and dated from 1st century BCE to 1st century CE. 2. Manmodi: Located on the Manmodi hill and houses the monastic complex known as Gidha-vihara (Gridhra-vihara) in ancient inscriptions. The cave group consists of nearly 40 individual excavations in three distinct groups: Bhimasankar group, Amba-Ambika group, and Bhutalinga group. 3. Sivaneri group of caves: Nearly 50 caves located in five separate groups on Sivaneri hill. 4. Lenyadri or Ganesh Lena: Consists of 40 caves and Viharas (dwelling areas) and named after the Ganesha image found in cave number 7, which is the largest among the chaityagrihas in caves 6 to 14.

The inscriptions in the Junnar group of caves marks their around mid 3rd century BCE to late 3rd century CE; the Lenyadri group of caves dates back to 1st century to 3rd century CE. The area is close to Naneghat, a pass in the Western Ghats connecting the seaports of Sopara, Kalyan, etc. with the cities like Nasik, Paithan, and has also yielded inscriptions and sculptures of the members of Satavahana dynasty rulers. Junnar is believed to be ancient city of Minnagara, the capital of Nahapana. 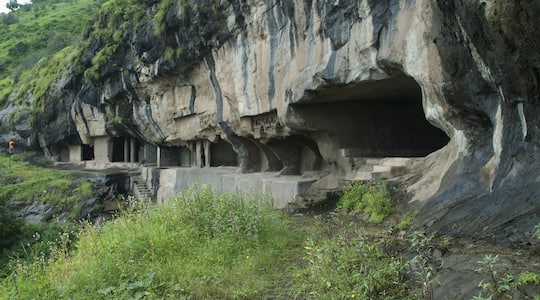