Size up the World's Tallest Statue

About Statue of Unity

With the opening of the Statue of Unity, dedicated to the ‘Iron Man of India’, Sardar Vallabhbhai Patel, India just made its entry into the club of the tallest statues in the world.

Dedicated to one of India’s founding fathers, and the country’s first Deputy Prime Minister, Sardar Vallabhbhai Patel, the Statue of Unity, stands tall atop Sadhu Bet island on the Narmada facing the Sardar Sarovar Dam downstream in Kevadiya colony, about a 100 kilometres southeast of Vadodara.

Prime Minister Narendra Modi unveiled what is billed to be the world’s tallest statue at 182 metres, leaving China’s Spring Temple Buddha at 153 metre, a long way behind. The project was handed over to Larsen & Tubro at a whopping 2,989 crore, who commenced construction on 31 October 2014. The idea was to inaugurate the Sardar Patel statue on his 143rd birth anniversary, on 31 October 2018. And as promised, the project was wrapped up in a period of 42 months with no escalation on fuel, labour and material. However, the Sardar Vallabhbhai Patel statue was first announced at a press conference by Narendra Modi on 7 October 2010 to commemorate his 10th year running as Gujarat’s chief minister.

As a part of an outreach programme to support the project, the state had asked Indian farmers to donate their used farming equipment in order to amass iron needed for the statue of Sardar Patel. Eventually, about 5000 tonnes of iron was believed to be collected, however, it wasn’t used for the statue as previously intended, and used instead in other work related to the construction of the structure.

Reason for building the Statue of Unity

Sardar Patel’s commitment towards the unification of the princely states for the formation of a consolidated Indian republic, and his tireless relief efforts for the refugees leaving Delhi and Punjab and integrating the British colonial provinces that were allocated to India, earned him the title “Unifier of India’. And it was in his memory, and as a mark of his contribution to a nation filled with diversities, the idea of the Statue of Unity took birth.

The massive bronze Vallabhbhai statue produced at a foundry in China was designed by Indian sculptor, Ram Vanji Suthar, a Padma Bhushan and Padma Shri awardee for his contribution in the field of arts. In his 40 years of work life, he has created over 50 monumental sculptures. Speaking of the Patel statue, his son, Anil Suthar, also a sculptor, has described the pose - head up, a shawl clinging from the shoulder, and hands set on his side as if he is set to walk - portrays the true character of the person, his striving persona, and the unmistakable, iron will. After four years of work, the specifications of the structure stand at; height from the base is 240 metres, height of the base 58 metres, height of statue 182 metres.

Of the five zones the statue is segregated into only three are open to public viewing. The first level entails the base going all the way to the statue’s shins, comprising a museum cataloging Sardar’s Patel’s contributions, and a memorial garden. Zone 2 goes up to the statue’s thighs at 149 metres. The viewing gallery, affording expansive views of the Narmada and the surrounding Satpura and Vindhyachal ranges, forms the third level. Zone 4 and 5 are the highest levels, and serve as the maintenance area.

How to Reach Statue of Unity

The statue of Sardar Patel is more than just a memorial, it is all set to become Gujarat, and perhaps even the country’s, significant tourist attraction. About a 100 kilometre from Vadodara, 200 kilometre from the capital Ahmedabad, and about 420 kilometre from Mumbai, the various ways to reach the site is by driving on State Highway 11 and 63. You will arrive into the nearest town of Kevadia in the Narmada district, and the statue is only 3.5 kilometres from there. Work is on to connect the statue site with a highway. From the mainland, you need to take a bridge to get to the statue, another plausible way is a ferry ride to the Sadhu Bet island where the statue is stationed.

Rajpipla in the Narmada district is the nearest city to the Statue of Unity, about 25 kilometres away from Sardar Sarovar Dam.

The Vadodara airport is about 90 kilometres away from the site. From the airport, you can hire a cab or use the state transport to get to the Sardar Vallabhbhai Patel statue.

Vadodara railway station is the nearest rail head to the Sardar Patel statue. You can get on the public transport or book a cab to take you directly to the site.

Hotels near Statue of Unity

The Shrestha Bharat Bhavan, which is adjacent to the Statue of Unity, is a 3-star hotel with all modern amenities, cafeteria, and conference facilities. In the vicinity, a special tent city is on the cards that will have about 250-odd tents spread across its 70,000 sq ft promising you a quiet night under the stars on the banks of Narmada. The facility is touted to be powered by solar energy.

Tuesday through Sunday are Statue of Unity opening days.

Statue of Unity opens at 9 am and closes at 5 pm.

You can book your Statue of Unity tickets on its official website by selecting your preferred time and day, or buy it directly at the site. The SOU online ticket booking is maintained by the Sardar Vallabhbhai Patel Rashtriya Ekta Trust.

The former includes Valley of Flower - the stretch leading to the Patel Statue with over 100 varieties of flowers, memorial, museum, audio visual gallery, the Statue of Unity (SOU) site and Sardar Sarovar Dam. The adult pricing is INR 120 + INR 30 (bus charges), and for children aged 3 to 15 years, the price is INR 60 + INR 30 (bus charges).

Interesting facts about the Statue of Unity

# The height of the tallest statue is 182 metres to match the number of seats, 182, in Gujarat Legislative Assembly.

#The Statue of Unity is equipped to withstand winds of 130 kilometre per hour velocity and earthquake measuring 6.5 on Richter scale.

# The concrete towers that make up the statue’s legs have two elevators each that can carry 26 people at once to the viewing gallery in all of 30 seconds.

# The viewing gallery at 153 metres can accommodate up to 200 people in one go offering great sweeping views of the dam and its surroundings.

# The complex has a separate selfie zone for the lovers of social media.

# About 5700 metric ton of structural steel and reinforcement bars of 18500 metric ton were used in the construction of Statue of Unity.

# The Statue of Unity is billed to generate over 15,000 direct jobs for the local tribal folks every year.

# Larsen & Tubro has a 25-year contract to handle daily operations and maintenance of the structure.

# Now if you are wondering about the Statue of Unity cost of construction, here’s an estimate. Funded partly by the State and the Central government through the Sardar Vallabhbhai Patel Rashtriya Ekta Trust, the Sardar Patel statue cost a staggering INR 2,989 crore (407 million US dollars). 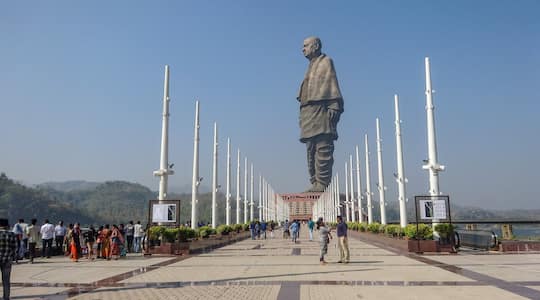 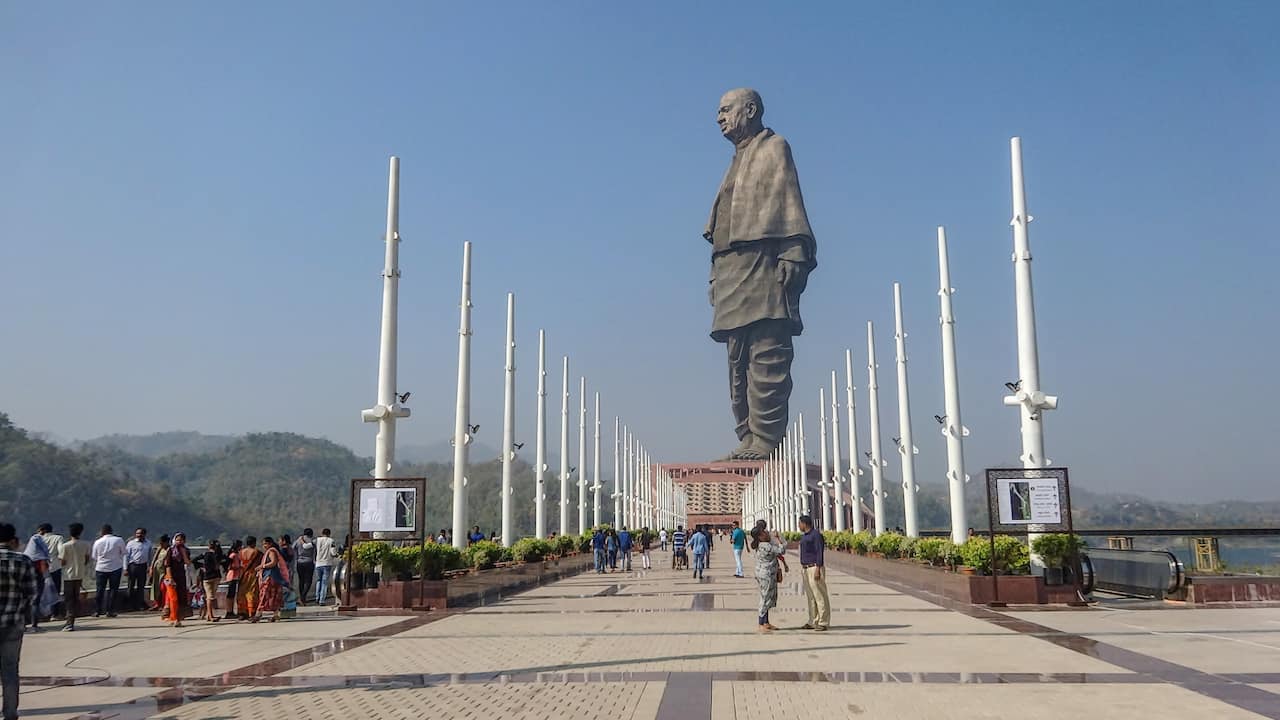