A civilisational contiguity, vibrant cultural asset, and a thousand voices seeping into cerebrum, Khajuraho Group of Monuments is like the last dot in the realm of time and space offsetting the social structures fitting the human emotions and sensibilities into a combined aesthetic that has had us all in thrall. It’s like a canvas born of the soil, spread out on wood blocks depicting and celebrating life in its purest form.

Built between 950-1050 CE by the Chandela dynasty, Khajuraho Temples are one of the most important specimens of the Indian art. These set of Hindu and Jain temples took around a hundred years to take shape. Originally a collection of 85 temples, the number has come down to 25. A UNESCO World Heritage Site, the temple complex is divided into three spheres: the Western, Eastern, and the Southern. The Western group consists of majority of temples, the Eastern comprises carved Jain temples while the Southern group has only a few temples. The Jain temples in the Eastern Group of temples were built for the flourishing Jainism in the region during the Chandela rule. The temples in the Western and Southern part are dedicated to various Hindu gods and goddesses. Out of these eight temples are dedicated to Vishnu, six to Shiva, and one each to Ganesha and Surya while three are for Jain tirthankaras. The Kandariya Mahadeo temple is the largest of all the temples that remain.

The Chandela rulers built the temples over a span of 100 years, a temple being commissioned by a king each. Most of the temples were built by kings Dhangadeva and Yashovarman. The temples were built near Mahoba which used to be the seat of the Chandela empire. The temples were named after the date palm trees that used to be the gates of the premises back in the day. The Khajuraho Temples are majorly known for their erotic sculptures and carvings but there are similar sculptures at the Konark Sun temple in Odisha. Interestingly these sculptures have many theories to their existence and are based on the Hindu iconography and are a part of the core belief system which hinge around the four tenets of Hinduism: karma, dharma, kama, and moksha.

The temples follow the design sensibilities of the Nagara-style architecture and are made out of sandstone and granite. Barring the temple of Chaturbhuja all temples are sun-facing, a common aesthetic found in Hindu temples. The deities of male and female deities exhibit a co-dependence of the male and female power. The temples run on the basic mandala design comprising a square and circles. The entire precinct is divided into three zones combining to form a pentagon. The three zones house the following temples:

The visiting hours for Khajuraho Temple are from 8 am to 6 pm.

The museum is open from 8 am to 5 pm and remains closed on Fridays. The ticket price for Indians, SAARC and BIMSTEC tourists is priced at Rs 10 while the foreign tourists have to pay Rs 250. The museum is located near the Matageshwar temple around the Western group of temples.

How to Reach Khajuraho Temple

Located in the northern Madhya Pradesh, Khajuraho is famed as the land of the Khajuraho temple. It receives a huge number of tourists every year for this major tourist attraction alone. And it is because of this reason that Khajuraho is easily accessible and has its own airport pretty near to the site. The easiest way to reach Khajuraho is by flight, the airport is only 2 minutes drive from the town. Else, you can take a bus from Chhatarpur. The town Khajuraho is 44 km from district Chattarpur, 281 km from Gwalior, 375 km from Bhopal, 565 km from Indore, 355 km from Ranchi. The closest cities from Khajuraho are Harpalpur (94 km), Satna (117 km), Jhansi (175 km) and Jabalpur which is 258 km.

Situated in Chhatarpur district, Khajuraho Railway Station is 5 km from the Khajuraho temple. There are trains from Delhi to Khajuraho, Agra to Khajuraho, Varanasi to Khajuraho and more. Choose from Khajuraho-Hazrat Nizamuddin Express, UP Sampark Kranti Express, Bundelkhand Link Express to reach the town.

Khajuraho Airport is a stone’s throw away from the Khajuraho Temple Complex, a mere kilometre run. It operates flights from Delhi and Varanasi.

There is no metro station in Khajuraho although both Indore and Bhopal have their own metro rail networks.

When to visit Khajuraho

he best time to visit Khajuraho is during winter between October to March. If you are culturally inclined then you must plan your trip to Khajuraho during the annual Khajuraho Dance festival. The week-long classical dance festival is held every February. A celebration of the Indian classical dance forms, it is a must-attend if you are an enthusiast or want to appreciate the aesthetic of the cultural performances against the backdrop of the ancient temple. Book hotels in Khajuraho online before you plan your trip. 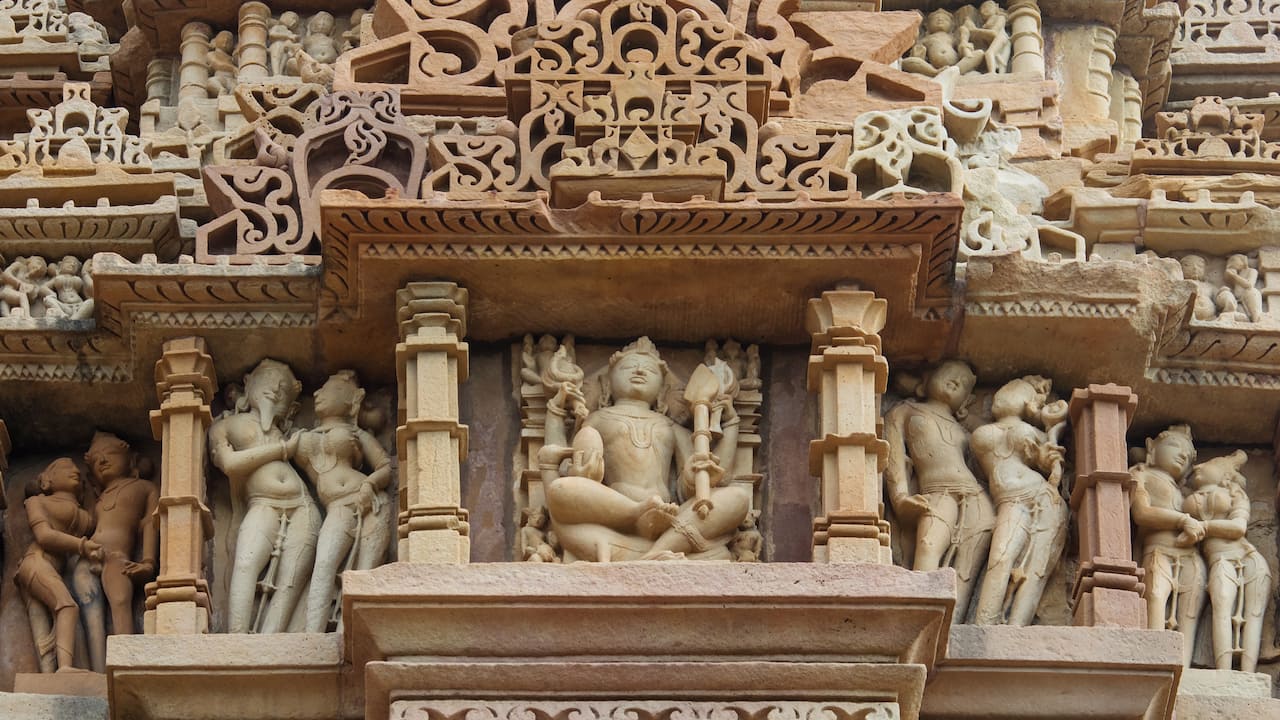