An hour-long ferry ride from the Gateway of India to the Elephanta Island in the Mumbai Harbour, will open you up to a hidden world of rock-cut caves robust in their carvings and boasting a legion of Shaivite sculptures. Welcome to Elephanta Caves, tucked away in a desolate island locally called Gharapuri (city of caves) 10 kilometres east of the Gateway of India. Through the 19th and 20th Centuries, historians and scholars have been in two minds about their exact period of origin. Further studies, numismatic evidence, architectural style and inscriptions have traced the cave temples to King Krishnaraja from the Kalachuri dynasty around mid-6th Century, and the Buddhist Stupas to the Hinayana Buddhists who had settled in the island around 2nd Century BCE, much before the advent of the Brahmans to Elephanta.

Hewn into a basalt rock face, this UNESCO World Heritage Site straddles two hills, one to the west and the east. The western ridge rises gradually from the sea and expands towards the east across a gorge and peaks at an elevation of about 173 metres. The landmark cave here is Cave 1 or the Great Cave on the western hill known for its stellar Shaivite depictions and reliefs from Hindu epics and mythology. Adjacent to Cave 1 and in the southeast direction, Cave 2 through 5 pan out. Cave 6 and 7, however, are on the rim of the eastern hill which is otherwise home to the two Buddhist caves with Stupas and water tanks. There is a walkway connecting the east and the west hill.

The local Marathi folks popularised this island as Gharapuri, but Elephanta became common parlance after the Portuguese took over the land from the Gujarat Sultanate in 1534 and named it so after the massive rock-cut elephant statue that stood sentinel over the sea. The colonisers identified the structure as a landmark to dock their boats and to also tell it apart from the other smaller islands on the Arabian Sea. You can no longer find this monolithic elephant statue here as it was damaged in an attempt to move it to England. In 1914, it was reassembled by Cadell and Hewett and placed in the Jijamata Udyaan, a zoo and garden in Byculla, Mumbai, where it stands today.

While the artwork in the historic Elephanta Caves owe it to the various religious texts, spiritual philosophy and Hindu mythology, and not to mention, the Puranas and the epics, the sculptures and the panels are also considered a veritable commentary on the Hindu culture and society in mid-1st millennium CE.

Here’s a definite guide to explore the Elephanta Caves:

Cave 1 or the Great Cave: After disembarking from the ferry, you can either walk the one kilometre distance to the cave site or take a toy train from the pier to the base of the hill. Further, you need to ascend a fleet of 120 steps to the hilltop on which the Great Cave is perched. The architecture of the cave seems to have been borrowed from that of a typical Buddhist Vihara (monastery), with a central court and several pillared cells. For a depth of 39 metres from front to back, it has a remarkably small main entrance. Although, there are two side entrances each from east and west. An ode to Shaivism, the temple complex celebrates the various forms and manifestations of Shiva with some larger-than-life sculptures. The centerpiece of the Grand Cave is the Trimurti, and also the most intriguing. Facing the north entrance is the Trimurti sculpture carved in relief on the cave wall depicting Shiva with three heads, also called Sadashiva. The three heads each are symbolic of the holy trinity, translating into creator, preserver and destroyer. The Gangadhara is another depiction of Shiva just to the right of the Trimurti. Here, in extreme detail, Shiva is shown bringing the Ganges down from the heavens to serve mankind, while Goddess Parvati looks complacent standing beside him. The carving of Ardhanarishvara to the east of the Trimurti is in a dilapidated state. It portrays the coming together of energy and power by showing the unification of Shiva and Parvati with the upper half as a feminine form and the lower, masculine. Nataraja, Yogishvara, the wedding of Shiva and Parvati are among the other popular themes Cave 1 delves into.

Canon Hill for Caves 2 to 5: Cave 2 was ravaged and restored in the 1970s. It has four square pillars and two small cells. Cave 3 carries on the mandapa architectural legacy with pillared recesses and inner chambers. The central door holds a damaged shrine, believed to be that of Shiva. Next in line is Cave 4 also in a ruinous state with a rambling verandah bereft of pillars. Though, there is a lingam in the shrine at the back of the structure. Cave 5 simply exists with no discernible reference to any tenet in history.

Stupa Hills for Cave 6 and 7: Cave 6 on the eastern hill across from Cave 1 is also called Sitabai cave temple. The porch has four pillars, three chambers and a central shrine. No adornments from the times gone by remain in the cave, barring a frieze with some lion figures carved on it. Cave 6 is significant historically owing to its conversion and use as a church during the Portuguese rule. There isn’t much left of Cave 7 too save for a small verandah which probably accommodated three chambers. The dry pond beyond Cave 7 was probably a Buddhist water tank due to the presence of Buddhist cisterns on its shores. Close to the cistern is a huge mound identified as a Stupa that dates back to 2nd Century BCE.

Defacement and Restoration of the Caves

Over centuries scholars have argued over who defaced the structures most, but their findings remain inconclusive to this day. Some schools blame it on the Gujarat Sultanate period for dealing a blow to the artwork and decorations across the caves, and there are others who find the Portuguese soldiers guilty of using the caves as a firing range and the statues for target practice. A few experts exonerate the Muslim rulers and the Portuguese from any defacement the caves suffered, for they were believed to have plastered the artwork and even the caves. These experts believe that the Marathas expedited the impending doom of the caves by deliberately damaging the artwork in the 17th century. In the 1970s, the Indian government made major restoration efforts and gave the heritage site a new lease of life. Today, the Archaeological Survey of India (ASI) manages the site in terms of constructing support structures and maintaining the on-site museum and visitor facilities.

The Elephanta Caves visiting hours are between 09:30 am and 05:30 pm. The first ferry leaves the Gateway of India jetty at 09:00 am and takes you to the Elephanta Island in about an hour. A ferry leaves every half hour from the Gateway of India for Elephanta, with the last one leaving at 02:00 pm. The first ferry returns from Elephanta at 12 noon and the last one at 05:30 pm. The return boats too ply every half hour. When you board a ferry from the Gateway of India, bear in mind that after the one hour ride, you have a 30 minute trek up to the caves site, and another hour at least to explore the caves before you begin your descent to the jetty, which will take an additional 30 minutes. Plan your trip in a way that you do not miss the last boat back to Mumbai.

Stay at one of the hotels in Mumbai in the south, and plan a day trip to the caves.

The ferry service and the Elephanta Caves are shut on Mondays.

How to Reach Elephanta Caves

To get to the Elephanta Island, you need to take a ferry from the Gateway of India jetty. The ferry charges around INR 150 for a two-way trip. Career across the bay towards Mumbai Harbour for an hour and then you will arrive at Gharapuri or the Elephanta Island. From here you can either walk the one kilometre distance from the harbour to the base of the western hill, home to the Grand Cave, or take a toy train to the site. The toy train charges INR 10 per passenger. Further, there is a climb of 120 steps to the entrance of Cave 1.

There is no metro connectivity to the Gateway of India or the surrounding area.

Nearest Airport to the Elephanta Caves

To avoid last minute hustle, it is advisable to book your Elephanta Caves ticket from the web, and simply present yourself at the venue. You could opt to do so from Yatra’s Monuments section, where you just need to key in Elephanta Caves. You will get all the details on the monument in the subsequent page, along with the ticket price. Simply add it to your cart, enter your card details and land on the payment gateway. Once the booking is confirmed, your Elephanta Caves online ticket will be sent to your email id. Carry a printout of the same to the venue. The ASI website also allows for online ticket booking of the Elephanta Caves.

While Elephanta is a year-round destination, it is best to avoid the monsoon months between June and August because torrential rains can derail boat schedules, besides choppy waters may not be the most ideal to venture into. The weather will be your friend between November and February, even early March, and is better suited to walk about and explore the sculptures at Elephanta. Also February is the month for the two-day Elephanta festival which experiences an explosion of cultural activities from classical dance performances, musical recitals, theatre renditions, and not to mention, performances by folks from the local Koli fishing community. With a dramatically lit up Trimurti sculpture in the backdrop, the ambiance in the pillared portico of the Great Cave, the venue for the festival, is to say the least, other-worldly.

Other Monuments in Mumbai

Kanheri Caves is one of the other popular monuments in Mumbai 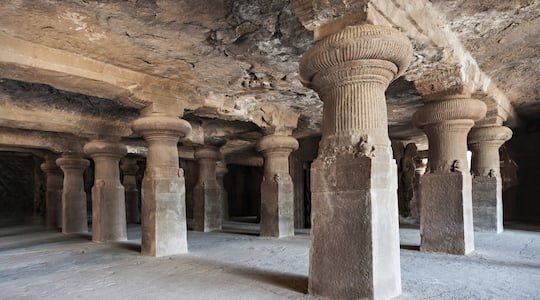 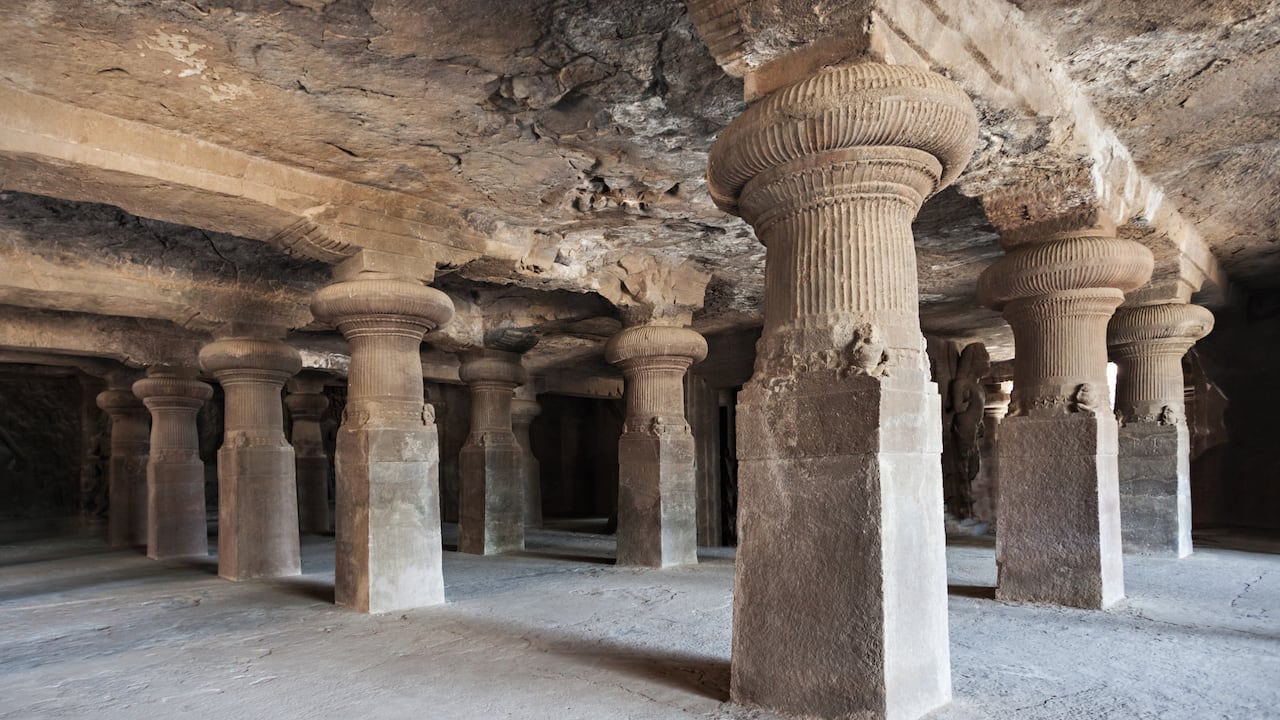