About The Archaeological Museum, Nalanda

The Archaeological Museum in Nalanda is one of the most visited locations in Bihar, famous for housing thousands of historical objects. Established in 1917, the museum houses antiquities mainly those obtained from Nalanda. It is the earliest university cum monastery complex located in the town of Rajgir. The museum has four galleries that display some of the numerous historical findings. Around 349 antiquities out of 13,463 are available on display that date back from 5th to 12th century AD. The sculptures and images belonging to Buddhist, Jain and Hindu faith are available in good numbers here, most of which are made of stone, stucco and terracotta. The first of the four galleries has 57 sculptures and images; the second gallery presents 147 miscellaneous objects including stuccos, terracotta, iron implements and inscriptions. The third one exhibits 93 specimens of bronze. The last gallery i.e. the fourth has 36 stone images and sculptures. Apart from these galleries, there is a separate shed in the museum that stores two huge jars which were found from the monastic complex at Nalanda.

The Archaeological Museum in Nalanda houses most of the antiquities that were found from the excavation of Nalanda University. The university is believed to be established somewhere around fifth century AD. The findings show that the university was a fully resident one that could accommodate 2,000 teachers and around 10,000 students. Nalanda University lasted for around 800 years before invaders destroyed it. The institute used to be the center of studies in entire Asia during its time. It attracted scholars from China, Japan, Korea, Turkey, Mongolia, Sri Lanka, Tibet and South East Asia. Many western universities, including Oxford University, were established before the destruction of the Nalanda University. 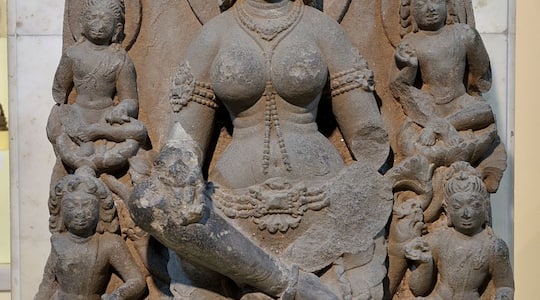