Built by one of the Sultans of Delhi, the Firoz Shah Kotla fort has a unique presence of three varied structures, the Ashokan pillar, Jami Masjid (Mosque) and a Baoli (step well) besides a vast garden area. The 13.1 metres high pillar made of polished sandstone which belonged to the Mauryan empire was brought from Ambala and installed on a three-tiered arcaded pavilion near the mosque. Jami Masjid is one of the most popular, ancient and the largest thriving mosques in India. Prayers are held till today regularly. Based on the Tughluq architecture, the mosque is built on a series of basement cells constructed of quartzite stone and covered with lime stone. It is surrounded by a large courtyard with walkways and a Prayer Hall. Jama Masjid can be entered on the northern side and it is connected to the Ashokan Pillars by a raised path. Built as a summer retreat for the members of the royal family, the step well is situated at the centre of a large garden. The baoli or the step well is formed here as an underground complex of stairways, corridors, tunnels and rooms over two storeys. The large underground canal brings water into the well.

Feroz Shah Tughlaq established the fortified city of Firuzabad in 1354 as the new capital of the Delhi Sultanate. He ruled Delhi from 1351 to 1384 and built the Feroz Shah Kotla fort in 1354. The fort has a 3rd Century BC Ashokan Pillar which was first erected by King Ashoka between 273 and 236 BC in Topra Kalan, Yamunanagar district and it was left there later by one of the Mauryan emperors. Feroz Shah got it transported from Ambala in 14th century covered in the cotton silk. The Baoli here served as a summer retreat for the Royalties. 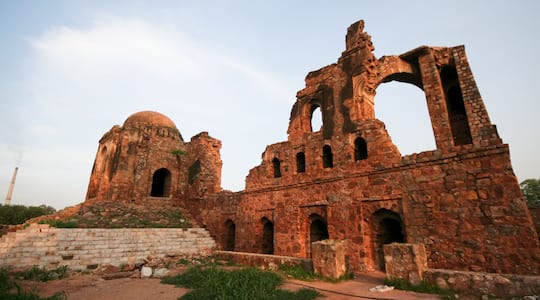