Standing tall and proud as the insignia of the Mughal might and dominion, Qutub Minar is an iconic monument which spells out the narrative of Delhi like no other. It forms a part of the Qutub Complex comprising the Quwwat-ul-Islam Mosque, Alai Darwaza, Alai Minar, Ala-ud-din's Madrasa and Tomb, Iron Pillar, Tomb of Imam Zamin, Sanderson's Sundial and Major Smith's Cupola. The tallest brick minaret in the world is said to have been designed on the lines of Minaret of Jam in Afghanistan. Situated in Mehrauli - the heritage storehouse of Delhi, the site is also the venue for the annual three-day Qutub Festival - a gathering of musicians, artistes, and dancers. You can now book Qutub Minar online ticket on Yatra.com and forget about the woes of queues. The Ministry of Tourism has chosen Yatra to be Qutub Minar’s ‘Monument Mitra’ under its ‘Adopt a Heritage’ initiative where the onus of maintenance and upkeep of Qutub Minar will be on Yatra.

The sun of the dusk marks a leaning silhouette of the mighty tower of power as your reminiscences of the past become more vivid with the sun setting behind in the backdrop. As you enter, the glorified plaques greet you giving you the slice of history and what Qutub Minar stands for. But Qutub Minar is many things for many people. In the present day it has been elevated to a different rank and entered the realms of romantics. What with many fine dining , swish eating houses in Mehrauli offering its patrons the moonlit views of the minaret establishing the monument as one of the most idyllic places in the city. Who knew the might of Islam could serve as a fairytale setup for intimate conversations over a bottle of bubbly? And that’s how varied history is for us for we form perceptions and interpretations the way it appeases us. For the ones who appreciate history as it is can rent the audio guides available at the entrance with detailed information on the monument.

A UNESCO World Heritage Site, Qutub Minar has always been shrouded in mysteries galore and conflicting views. According to historians the minaret was named after Qutb-ud-din Aibak, responsible for erecting the monument while some others opine that it was named after Khwaja Qutb-ud-din Bakhtiar Kaki, who was a saint from Baghdad held in high regard by Iltutmish. The Alai Minar was to be the tallest tower in the world twice the size of Qutub Minar envisioned by Alauddin Khilji but post his death his ambitions were never carried on by anyone. Today Alai Minar stands at 27 metres to the north of Quwwat-ul-Islam Mosque and Qutub Minar. One of the last remaining monuments depicting the Afghan-styled architecture, Qutub Minar was inspired by the Minaret of Jam in Afghanistan.

Built as a symbol of victory for Muslim invaders over the Hindu land, Qutub Minar served as a victory tower when Muhammad Ghori took over the Rajput king, Prithviraj Chauhan, in 1192. Later Ghori’s viceroy, Qutb-ud-din Aibak, who went on to become the first ruler of Mamluk dynasty began the construction of Qutub Minar. The minar has endured the forces of nature and time - it is said to be struck by lightning in 1368, which damaged its top storey, which was later replaced by the existing two floors by Firoz Shah Tughlaq. Then in 1803, an earthquake jolted the minaret and the then major in the British Indian Army, Robert Smith renovated the tower in 1828 and even installed a cupola over the fifth floor which added another storey to the tower. But in 1848 then Governor General of India, Viscount Hardinge instructed to take down the cupola and place it at the ground level to the east of Qutab Minar where it exists even today and known as Smith's Folly. This is one of the reasons why the structure has a varied architectural facade ranging from the time of Aibak to that of Tughlaq dynasty.

Qutub Minar has taken architectural and design influences from Minaret of Jam in Afghanistan. The lotus borders carvings, garlands and looped bells were incorporated from the local sensibilities. The tower has five tapering storeys superposing with a spiralling staircase of 379 steps. The lower three storeys consist of cylindrical hilts of red sandstone, separated by rims and balconies, with Muqarna truss. The fourth column is made of marble and the fifth is built of marble and sandstone with engravings of Quranic texts and decorative motifs. There are inscriptions in Nagari and Parso-Arabic characters on the walls of Qutab Minar which document its construction and reconstructions by Tughluq and Sikandar Lodi between 1381-1517.

The minar is said to be tilting about 65 cm from the vertical but is considered safe with the experts wanting constant monitoring so that the rainwater seepage doesn't affect its base. Back in the day and even today Qutub Minar stands as an inspiration for several towers and minarets built after it. Chand Minar built in 1445 in Daulatabad, Maharashtra was inspired from Qutub Minar. Visit the minar today to experience its beauty. You can visit other monuments in Mehrauli like Jamali Kamali mosque or Balban’s tomb.

How to Reach The Qutub Minar

Other Monuments in Delhi

Red Fort, Humayun’s Tomb, Purana Qila, and Tughlaqabad Fort are some other famous monuments in Delhi.

Things to Do in Delhi

There are many interesting things to do in Delhi such as shopping in popular places like Khan Market, Sarojini Nagar Market, Lajpat Nagar and Janpath Lane, as well as enjoying street food at Chandni Chowk.

You can now book Qutb Minar tickets online on Yatra.com. The website brings to you online ticket options for 141 historical monuments, museums and sites across India. So buy your tickets online and jump the queue..

Q. Who built the Qutub Minar and Why?

A: Around 1192, Qutub-ud-Din Aibak envisioned Qutub Minar, but he only got to complete the basement. The construction was later taken over by his successor Iltutmish who constructed three more stories of the tower. Firoz Shah Tuglak constructed the last two storeys. The tower was built as a victory monument to celebrate the Muslim dominance over Delhi after the defeat of the last Hindu ruler - Prithviraj Chauhan.

Q. What is Qutub Minar famous for?

A: Qutub Minar is one of the highest minarets in India with a height of 73 metres. It is a UNESCO World Heritage Site and the tallest brick minaret in the world. This 12th-century minaret is considered as the earliest Islamic structure in India with both Arabic and Brahmi inscriptions.

Q. What is the ticket price of Qutub Minar?

A: The entry ticket for Indian visitors is INR 35 and for foreign visitors is INR 550. For SAARC and BIMSTEC nationals, the netry fee is similar to Indian nationals i.e. INR 35. Children upto 15 years of age can enter for free. Please note that you must carry your identity cards to purchase a ticket and enter the monument.

Q. What are Qutub Minar timings?

A: Qutub Minar remains open on all days of the week, and the visiting timings are from 7:00 am to 5:00 pm. The best time to visit this monument is during the winter season, when the weather is cool and pleasant for sightseeing.

Q. How to Reach Qutub Minar?

A: Nearest Airport to Qutub Minar: Indira Gandhi International Airport is the closest airport to Qutub Minar at a distance of 13.8 km and will take 32 minutes to reach by road.
Nearest Railway Station to Qutub Minar: New Delhi Railway Station is the closest railway station at 17 km and is 55 minutes away.
Nearest Bus Stand to Qutub Minar: If you are coming by bus, the nearest bus stops is Qutub Minar Bus Stand, situated just outside the entry gate of the monument. You can take a DTC bus to travel to this monument from anywhere in Delhi NCR.
Nearest Metro Station to Qutub Minar: Delhi residents can take a metro and get down at Qutab Minar Metro Station. You can hail an auto as the monument is 6 minutes drive away from the metro exit. It is effortless to travel around Delhi as there are frequent buses, taxis, autos and online cab facilities available in the city. 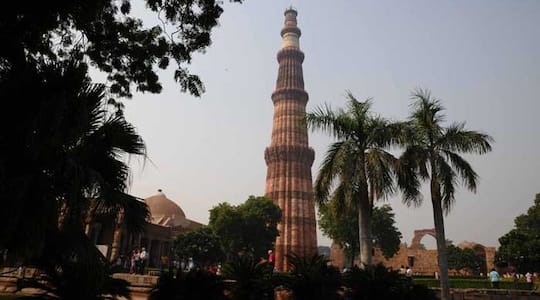