The vast stretch of red under the sun-warmed skies of Delhi is what defines the medieval madness of the city. The very sight of the bulwark speaks of its impregnable strength and stoic resistance of an old guardian. Spread over 256 acres overlooking the Yamuna with its massive enclosing walls the fort is rained in red and has stood the test of time and the anti-colonial defiance. Red Fort or Lal Qila is a representation of the cultural, political and architectural majesty of the Mughal Empire inking the Indian historical landscape with rich sundry hues.

The Qila-e-Mubarak or the blessed fort was home to Shah Jahan the Mughal Emperor and the grandson of Akbar, the greatest ruler the Mughal Empire ever saw. Not so different from Akbar, and having taken enough cues from him, Shah Jahan chartered his own course with élan. He was responsible for erecting some of the glorious structures of the time which are still identified as the most exquisite known for their sheer magnificence and the arduous journeys behind them. The Red Fort came to the being after Shah Jahan moved his capital from Agra and left his residence at the Agra Fort. He constructed a new walled city – Shahjahanbad naming it after himself and built a new residence, the Red Fort. It took a decade to complete the Red Fort which served as a residence to the Mughal rulers for nearly 200 years. The chief architect of the Red Fort was Ustad Ahmed Lahauri who started the construction in 1638 and completed in 1648.

The red in the Red Fort was always not present. What many don’t know is that the edifice was painted red by the British only after the limestone from which the building was originally built in started to chip off. The name Red Fort finds its roots in the British era after they painted it in red to preserve it and thus rechristened it to Red Fort which then had its translation to Lal Qila among the land of the people.

With the passing away of Shah Jahan the fate of the fort started to plummet as well. The successive rulers turned out to be defenceless against the rampages and pillages that followed. The Turk ruler Nadir Shah attacked the fort in 1739. The last Mughal ruler to have lived in the Red Fort was Bahadur Shah Zafar whose rule wasn’t so significant and the title was mere titular. Later when the British seized power and control, he was exiled to then Burma known as Myanmar now. And that was the end of the Mughal dynasty.

Standing proud on an area of 250 acres the Red Fort boasts of over 2 km of defensive walls adorned by bastions and turrets. The fort resembles an octagon and is decorated by marble, domes and flower engravings. Apparently the Kohinoor was part of the famous peacock throne.  The architectural, design and colour sensibilities of the fort set a rare specimen of the Mughal zeitgeist of the time. The Red Fort complex comprises the Red Fort and the Salimgarh Fort built in 1546 by Islam Shah Suri. The two gates of Red Fort: Lahori and Delhi Gates were built for the public whereas the Khizrabad Gate was what the emperor used. The Lahori Gate remains the main entrance to the Red Fort even today.

On entering the Diwan-i-‘Am, you will see the Naubat-Khana (Drum house). It is where the musicians played during ceremonial events. The huge hall has nine arches. The royal throne would be placed in the hall on the decorated alcove. Diwan-i-Khas is where the legendary peacock throne was said to be, before it was looted by Nadir Shah. The Red Fort also has Mumtaz Mahal which is now a museum, Rang Mahal, Khwabgah or the sleeping chambers, the Hammam or the royal bathing area with a garden without which any Mughal architecture is incomplete.

A site of protests, campaigns and political turbulence, Red fort was where the people marched in great number to show their solidarity for a nation they wished to call home. The fort has witnessed tears, sweat and blood during the Indian freedom struggle. The day after the iconic “Tryst with Destiny” speech delivered by Nehru, the first Prime Minister of the independent state addressed the vehement crowds at the Red Fort and raised the Indian flag – a symbol of the new found freedom ushering in an era of liberation, belonging and existence. An era, that was to see India becoming the biggest democracy in the world. And the tradition continues.

Every Independence Day, the existing Prime Minister delivers a speech to the waiting nation from the red rampart. The old walls of the fort have seen it all. The fort has been a witness to the long-winded spiels of the leaders while the sound of the applause from the ebullient masses cheering for a future laced with hope has reverberated through its walls with every passing year. To this day the fort soaks in the spirit of India and sees the prime minister hoisting the Tricolour with the skies filled with the colours of the flag. It’s very much a part of the Indian culture and has a special context in the ceremonial ethos of the country and its people. It’s synonymous with our freedom standing tall as a guard of honour greeting the new leaders and people who come to visit it every year to remember the struggles we had to go though to achieve the freedom.

# Lal Qila is full of afternoon stories and its legends make for an interesting cosy chat. There is one which talks about how the prisoners were beheaded and used as a foundation of the building for good luck.
# There lies a hidden 'baoli' or stepwell touted to be older than the Red Fort which remains inaccessible to visitors even today.
# It was said that one could fish from the fort back in the day when it was built on the western banks of the Yamuna but then the river changed its course over the years.
# The British destroyed the green belt inside the fortress to build barracks for the colonial army.

Red Fort can be visited on all days except Mondays. The Red Fort timings are 9.30 am to 4.30 pm. The best time to visit is during October to February as this is when Delhi can be toured in its best form. You can come here post 6 in the evening for the light and sound show available in two languages: English and Hindi. The visiting hours for Red Fort for the light and sound show vary according to months and the language chosen. Check for the timings before you plan to go for the same.

Red Fort ticket price for Indians is Rs 35 and for foreigners it is Rs 500. The Red Fort entry ticket for the Light and Sound show is Rs 60 for adults and Rs 20 for children. The weekend ticket rate will cost you Rs 80 for adults and Rs 30 for kids.

How to Reach Red Fort:

Red Fort ticket price for Indians is Rs 35 and for foreigners it is Rs 500. The Red Fort entry ticket for the Light and Sound show is Rs 60 for adults and Rs 20 for children. The weekend ticket rate will cost you Rs 80 for adults and Rs 30 for kids.

In the recent development this mighty rampart under the government’s ‘Adopt a Heritage’ scheme has been adopted by a corporate house which will be responsible to manage and upkeep the Red fort for next five years. Although the move comes as a rude awakening for all of us but if it preserves the national pride and encourages tourism then so be it. The glories of the past should remain and that’s all that matters.

Q. Who built the Red Fort?

A: Red Fort or Lal Qila was built in 1639 by Shah Jahan, the eminent Mughal Emperor. During his reign he commissioned some of the finest architectural marvels which today are the best examples of the Mughal architecture in the world one of them being the Taj Mahal. Red Fort served as the emperor’s seat in the new Mughal capital Shahjahanabad, better known as Old Delhi today.

A: After the Mughal capital moved from Agra to Shahjahanabad, Red Fort was constructed as the new seat of the Mughal Empire. Made of red sandstone, the fort - a walled citadel took almost a decade to complete. It is believed that it was better planned and built compared to the previous seat of the Mughal Empire - the Agra Fort. The last Mughal Emperor to have lived at the fort was Bahadur Shah Zafar after which the British took over the country. Post Independence every year on August 15, the Prime Minister addresses the nation from the fort.

Q. Which is the main entrance gate to the Red Fort?

A: Red Fort has two gates: the Lahori Gate and the Delhi Gate. Lahori gate is the main gate to enter the fort. It is situated to the west wall of the fort while the Delhi Gate lies to the southern wall.When did the Red Fort become a World Heritage Site?The red sandstone rampart was declared a UNESCO World Heritage Site in 2007.What is the architectural style of Red Fort in Delhi? The architecture of the Red Fort is an archetypal specimen of the Mughal style which is a blend of Timurid and Persian along with smatterings of Hindu traditions.

* The Red Fort was originally in Shah Jahan’s favourite colours, white and red. The British painted the monument red after the white stone started chipping off because of negligence.

* Bahadur Shah Zafar, the last Mughal emperor, was tried on the charges of treason in Diwan-i-Khas, in the Red Fort. The trial was conducted by a British court, after which the emperor was stripped of his title and exiled to Myanmar.

Other Monuments in Delhi

Qutub Minar, Humayun’s Tomb, Purana Qila, and Tughlaqabad Fort are some other famous monuments in Delhi. 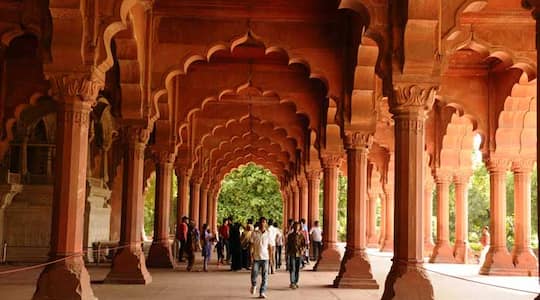 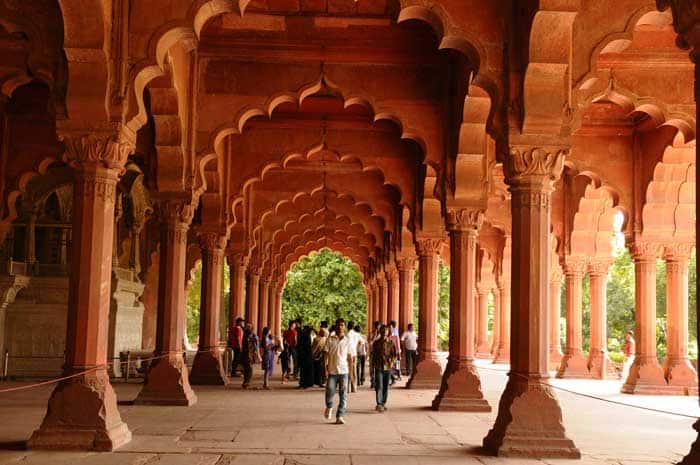 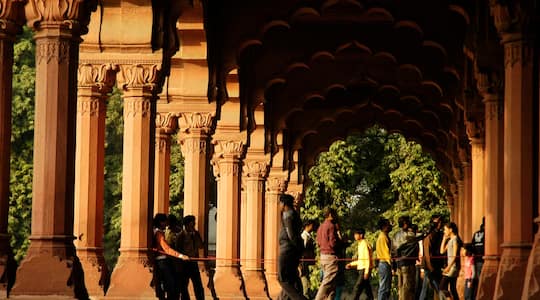 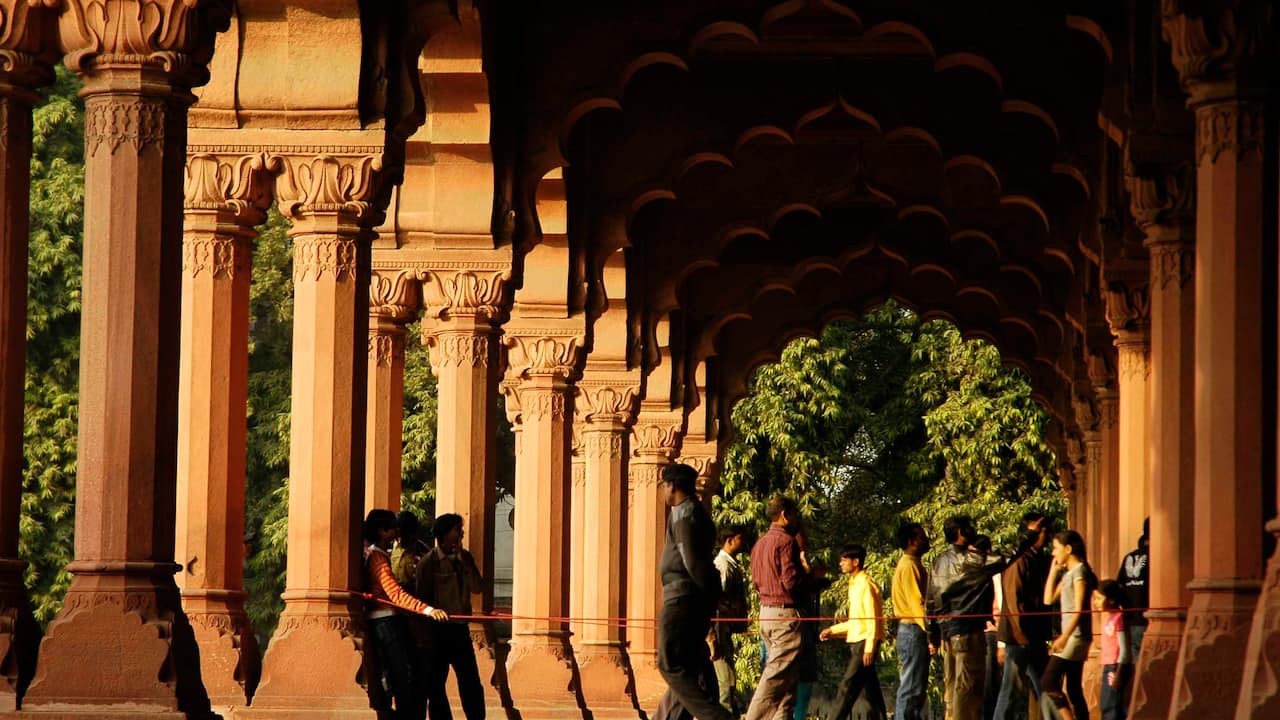 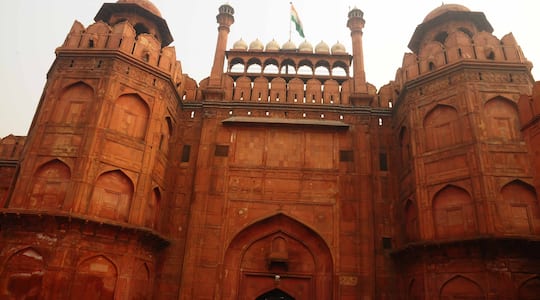 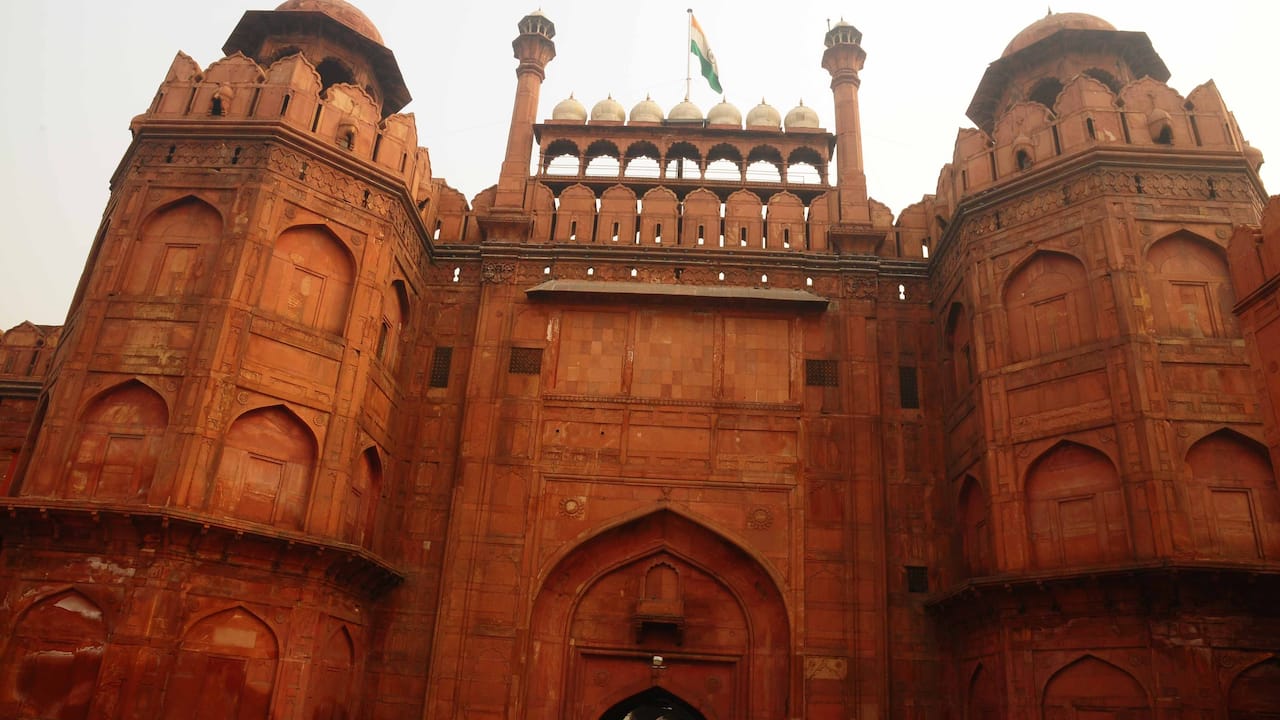 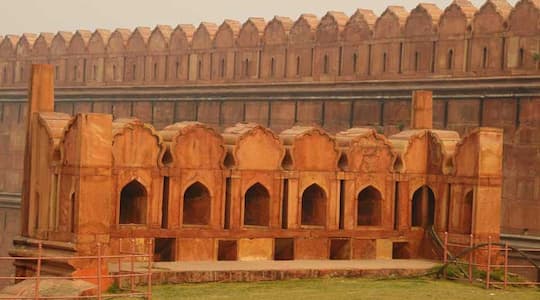 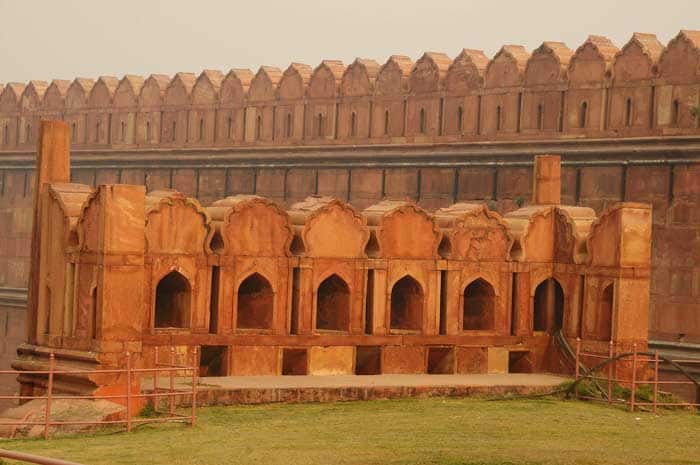