About Tomb Of Abdul Rahim Khan-I-Khana

Rahim Khane Khanam Tomb is located in Nizamuddin East, New Delhi. This Tomb belongs to Abdul Rahim Khan-i-Khanan, one of the important ministers who served during the rule of Mughal emperors Akbar and Jahangir. This tomb is located near other monuments such as Humayun’s Tomb, Tomb and Mosque of Isa Khan, Bu Halima's Tomb and Garden, Afsarwala Tomb and mosque, Arab Sarai, Nila Gumbad, Chillah Nizamuddin Aulia and Barber's Tomb. The popular Dargah of Hazrat Nizamuddin Auliya is also located near this monument. The facade of this tomb is now partially dismantled as historically, Shuja Ud-Daula removed complete red stone and marble of this monument and used in the structure of Safdar Jang Tomb. The ceiling of domes in the interior of the tomb comprise beautiful abstract designs. This tomb was built by Abdul Rahim to pay tribute to his wife. On his demise, he was buried in the tomb. This monument is surrounded by lush green gardens, which are maintained by the government authority.

The Rahim Khane Khanam Tomb was built by Abdul Rahim for his wife. Abdul Rahim, who was also known as Khan-Khanan, was later buried in the same tomb after his demise. The red sandstone and marble was later pulled out from this tomb and was further used in the structure of Humayun’s Tomb. Rahim was known for his dohas. 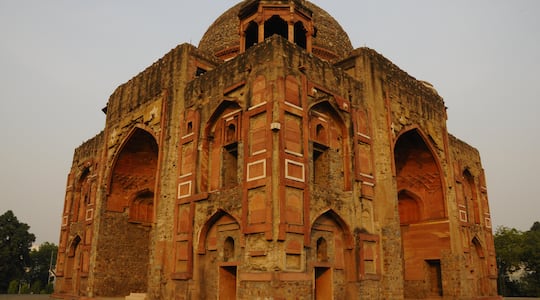