Here the language of stone surpasses the language of man”, says Rabindranath Tagore, about the iconic Sun Temple at Konark.
A UNESCO World Heritage Site, Konark Sun temple is a striking model of ancient artistry, fluidity of ideas, and a pedagogic treasury. Dedicated to the sun god, Surya, the first rays of the sun fall on the entrance of the temple. Much of the temple has fallen into rack and ruin but what remains still holds enough charm to captivate. An interpretation of a greater imagination, it has seen empires rise and fall, identities washed away, yet appealing to our sensorium even today.

Believed to have been built in the 13th century CE the temple was built by the King Narasimhadeva I hailing from the Eastern Ganga dynasty between 1238-1250 CE. The temple was commissioned by the king while Samantaraya Mahapatra was the one in charge of its construction. ‘Konark’ means the sun and the four corners. The temple was called Black Pagoda attributing to its dark facade by the Europeans who used it for navigation for their ships. It is said that the temple could draw ships to the shore due to its magnetic powers.

The temple is known for its impressive Kalinga architecture that includes a depiction of a 100 ft high chariot being pulled by horses and wheels carved out of a single stone. The monument portrays the imposing chariot of the sun god. Built of Khondalite rocks, the original temple had 230 ft high sanctum which no longer exists, 128 ft high audience hall, dance hall, dining hall which survive still. There are 24 intricately designed wheels, 12 ft in diametre which are seen drawn by horses. These seven horses represent the week, the wheels stand for the 12 months while the day-cycle is symbolised by the eight spokes in the wheels. And this whole depiction tells how the time is controlled by the sun – being the very illustration of the Surya in the Hindu mythology travelling from the east in his chariot escorted by his charioteer, Aruna.

Discovered in 1909 during the excavations, it lies to the west of the Sun temple. An important temple in the complex this is dedicated to Mayadevi - the wife of Surya, the temple is older than the Sun temple built around the 11th century. Its sanctum houses a Nataraja, and other chambers of the temple have idols of Surya with Vishnu, Vayu, Agni. The temple was considered by some as another temple made to worship sun god but a few believe that it was dedicated to the wife of Surya.

Konark Sun Temple timings are 6 am to 8 pm.

The temple is open on all days.

How to reach Konark Sun Temple

Konark Sun Temple is situated in Konark, a town in the district of Puri in Odisha. It is approximately 60 km from the capital Bhubaneswar and 35 km from Puri. Konark is a famous tourist destination owing to the Sun Temple and thus it is well-connected to Puri and Bhubaneswar by trains, buses and taxis. The easiest way however, to reach Konark is to rent a cab from Puri.

Konark Bus Stand is 6 minutes from the Sun Temple. You can board a bus from Puri and reach Konark in an hour. OSRTC and private operators provide bus service from Puri to Konark.

Puri Railway Station is the nearest railway station from the Konark Temple. It is 30 km from Konark. You can book Bhubaneswar to Puri trains and then take a taxi to reach the temple.

Bhubaneswar Airport or Biju Patnaik International Airport is 65 km and around an hour-long drive from the Konark Sun Temple. You can easily get taxis on hire to reach Konark from the airport.

The Konark Sun Temple ticket can be purchased at Rs 40 for Indians whereas if you are a foreigner then you have to pay Rs 600. The entry fee for Konark Temple for BIMSTEC and SAARC citizens is Rs 40. The entry tickets to Konark Sun Temple for the light and show can be bought at the venue. The visitors are provided wireless headphones and they have a choice between three languages: English, Hindi and Odiya. It is an hour long show starting at 7 pm. The ticket price is Rs 30 per person.

If you don’t want to buy the entry tickets to Konark Temple at the site and prefer pre-booking it then you can do the same by visiting Yatra.com. Log in for Konark Sun Temple ticket booking. Simply type in Konark Temple and click on pay, to reserve your Konark Sun Temple tickets online. Please read the instructions at the end of the page before booking the tickets and carry a photo ID which will be asked to produce at the site.

While visiting Konark you can stay in hotels in Puri but if you want a night stay or two in Konark then Panthanivas run by OTDC is a good choice. You can also pick from Surya Inn or Lotus Hotel (1.3 km), Sun Temple Hotel which is near the Konark Bus Stand and is only a kilometre or Resort Konark just 8 km from the temple.

Things to Do in Puri

There are several interesting things to do in Puri such as visiting Chandrabhaga Beach, offering prayers at Varahi Devi Temple and watching Konark Natya Manadap.

Q. When was Sun temple built and why?

A: Konark Sun Temple was built in the 13th-century in dedication to the Hindu Sun Lord - Surya. The temple is said to be an attribution to King Narasingha Deva I of the Eastern Ganga Dynasty. Another theory says that the son of Lord Krishna Samba was cured of a disease by the Sun Lord, therefore to honor him, Krishna Samba got the temple constructed.

Q. Why is Sun temple famous?

A: The ticket cost to visit the Sun Temple varies for foreign and Indian tourists. Foreign tourists need to pay INR 550 per person. For Indian nationals, SAARC and BIMSTEC Visitor the ticket price is INR 35 per person.

Q. What are the visiting hours for Sun Temple?

Q. Which is the easiest way to reach Sun Temple?

A: Nearest Airport to Sun Temple: Konark Sun Temple is 62 km away (1 hour 39 minutes) from the Biju Patnaik International Airport in Bhubaneshwar. You can hire a prepaid taxi from the airport counter or take a bus from outside the airport to reach the temple.
Nearest Railway Station to Sun Temple: The Puri railway station is the nearest train station to Konark Sun Temple at 36 km distance. You can find numerous taxis and cabs outside the railway station to take you to the Sun Temple. It approximately takes 50 minutes to reach.
Nearest Bus Stand to Sun Temple: The nearest bus stand is Konark Bus stand which is 6 minutes away. There are private as well as public bus operators like OSRTC, Dolphin Tour and Travels, Shyamoli Paribahan Pvt. Ltd, Diwakar Travels etc. which take you to the Sun Temple.

A combination of the Sanskrit words Kona meaning corner and Arka meaning Sun- together it means the Corner of the Sun. The temple was built by King Narsimha Deva of the Ganga Dynasty in 1250 AD, to mark his victory over the Muslim invaders. By the end of the 13th century, the Muslims had conquered the whole of the northern India, except Orissa, where the Hindu rulers deflected their attacks for quite some time. A great fight took place between Tughan Khan (Nasiruddin Muhamma's General) and he was badly defeated by Narsimhadeva, thus, the Kirti Stambha (victory memorial) was erected, as a symbol of his prestige. 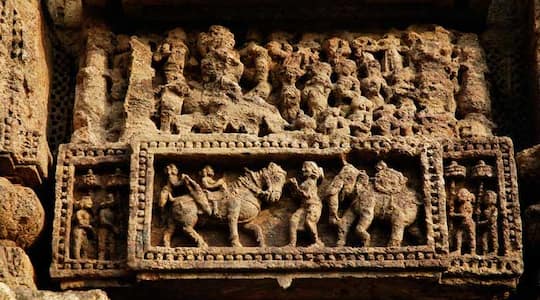 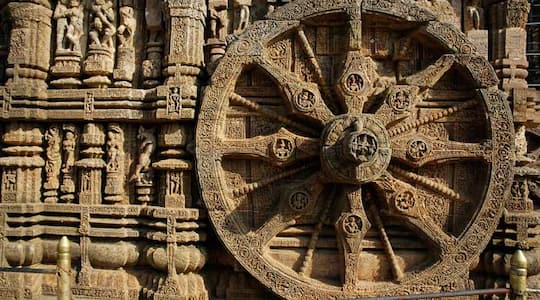 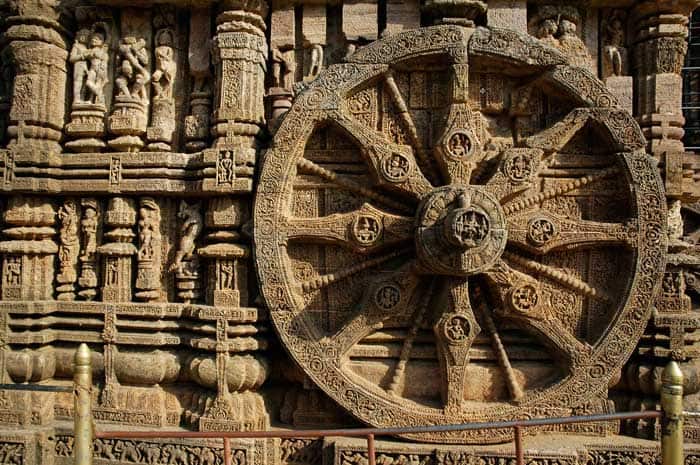 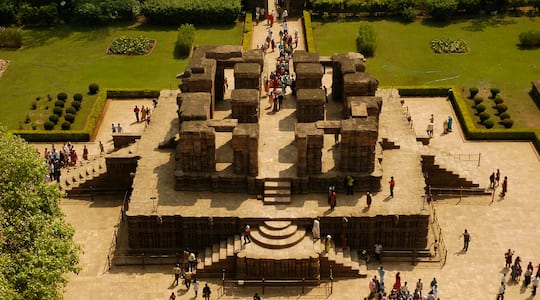