Rang Ghar is a royal 10-meter long double storied pavilion, which was constructed to watch cultural programs and traditional games which used to happen in the Rupahi Pathar (the vast field). It's a perfectly octagonal shaped structure, which is supported by rows of massive columns and semi-circular arches built in a typical Islamic architectural style. The building was constructed using locally sourced materials like unique, thin, baked bricks, which were made from a perfect amalgamation of Bora Chaul (a sticky variety of rice), pulses called Maati Maah, a fish named Borali Mach, and eggs, as mortar for the construction. They also used powdered mixed lime to cover the surface of the inner walls, as it was believed that this layer of powder used to keep the inside of the Rang Ghar cool. The entrance of the Rang Ghar (theatre) has two beautiful stone-carved crocodile structures on either side. As you walk in, you will find series of arches adorned with floral and geometrical designs. A steep staircase leads to the top from where you can view the beautiful Rupahi Pathar, which is now maintained as manicured lawns. The roof has a unique design of an Ahom royal long boat with Makara endings and a trefoil arch canopy in the center.

Located in Assam’s Sibsagar district, Rang Ghar Ruins is one of the oldest and well-preserved amphitheaters in the whole of Asia. This ancient amphitheater is often referred to as the 'Colosseum of the East.' Rang Ghar, which translates to “the house of entertainment”, is a historic amphitheater. The building was constructed by the Ahom king Swargadeo Pramatta Singha in the year 1746, for watching various games during the festival of Bihu. The building bears testimony to the Ahom architecture style and the culture of Assam. 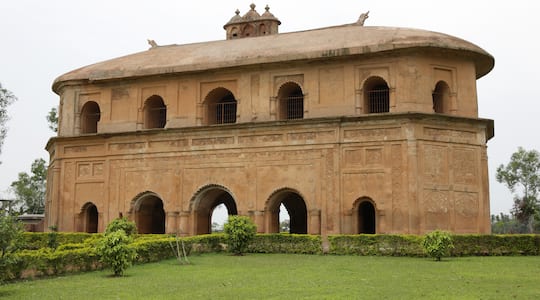