Located in Tumkur city in Karnataka, Narasimha Swamy Temple at Seebi was built during the British Raj towards the end of 18th century. The entrance of the temple has a 3-tiered tower. The temple with large prakara (bounding wall) has an open mantapa (hall) leading to a closed mantapa displaying shrines of various Hindu deities like Ganesha, Narasimha, Saptamatrika, Krishna and Sriranga. The major attractions of this temple are the mural paintings on the walls of the entrance hall and the ceiling that depict religious and courtly themes. The murals are divided into three rows: the first row depicting Krishna Leela, the second depicting a scene from the court of Maharaja Krishnaraja Wodeyar III with Nallappa and the third row displaying a scene from the court of Haidar Ali and his son Tipu Sultan. The main entrance ceiling has a mural of God Krishna playing the flute to other cowherd friends while watching Tipu Sultan fighting a Tiger. The ceiling has four beams each with a mural: the first depicts horses followed by elephants; the second depicts equestrians wearing conical caps with some horsemen in a gallop, others carrying flags and a couple on foot; the third depicts some horsemen riding, others on foot followed by elephants and a cart carrying cannons.

The Narasimha Swamy Temple, an elegant, simple Dravidian architecture, was built towards the end of the 18th century. Legend has it that a merchant once carrying grain on bullocks halted at Seebi. When he boiled a pot of grain on a projecting rock, its colour turned blood red causing the merchant, attendants and his buffalos to faint. It was then when God Narasimha appeared in the merchant’s dream informing him that the rock was his abode and that the merchant should establish a temple for him at that spot as atonement for dishonouring his abode. The merchant thus built a small temple. 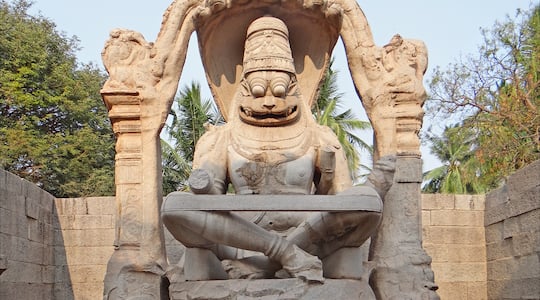