The main shrines of Moovar Koil all display the hallmarks of southern Indian temple architecture – in this case, a main vestibule built in a rectangular layout mounted with ornately carved, layered pyramidal roofs. Since these were dedicated to Shiva, the entrance to each shrine features a carving of Nandi the Bull as gate-guardian. The outer walls of the shrines feature intricately carved dancing figurines ensconced in rectangular niches, and elaborate motifs. This seems to be a slight departure from the typical architectural zeitgeist of the time. While only two of the three main temples survive today, the ‘ardha-mandapam’ or the base, of each remains intact. The three structures are also surrounded by sixteen smaller temples and all of them looked out on to a large, main compound. Two gates, in the west and northeast, were once built into a surrounding compound wall. The roof of each temple consists of three different tiers. The topmost layer resembles an inverted lotus and features horse-shoe shaped carvings along all four sides. On the whole, the architecture of Moovar Koil seems to display a mix of influences and styles. The shrines feature techniques that would later gain prominence in Pallava temples, while several features also seem to borrow from Buddhist artistic styles. 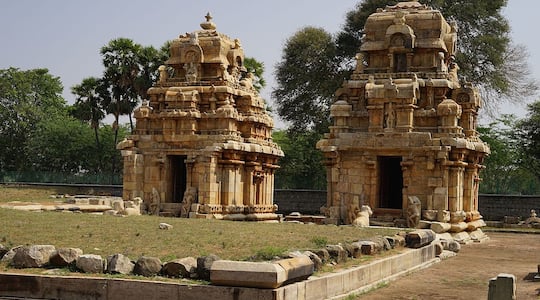